Mustangs have always had a whiff of fun parent about them to me. As with the much more expensive Porsche 911, a Mustang is a sporty 2+2: a coupe with two adult-sized seats and two smaller seats suitable for children or short trips. It’s got just enough practicality to justify it as a second car. If you put one in your garage for weekend excursions, it’s the car your kids will likely remember when they grow up.

This new high-performance, four-cylinder offering broadens the appeal as it cuts down on the carbon footprint while still offering plenty of enjoyment. With tackle box, fishing rod, tent, cooking stove, sleeping bags and even a guitar wedged into the Mustang’s trunk, my daughter and I headed up into the lonely mountains for a bit of a road trip.

With its long nose, big wheels, quad exhaust pipes and wide stance, it sure looks like a fast Mustang. But can a Mustang even be considered a genuine performer without eight cylinders under its hood? Just push the red-ringed starter button and listen to the snarly growl that follows. This eye-searingly orange coupe might have only half the cylinder count of its V8-powered big brothers, but it’s no slouch. It’s received a heart transplant from another type of Fast Ford: the much-missed Focus RS hot hatchback.

Featuring an upgraded turbocharger, added cooling and that new exhaust system, the 2.3-litre EcoBoost engine offers a stout 332 horsepower and 350 lb.-ft. of torque. You only need to go back a Mustang generation or two to find V8 models offering similar stats.

And, weirdly, the four-cylinder demands to be driven more like an old-fashioned V8 than the modern V8 Mustang. The EcoBoost offers most of its torque between 2,000 and 5,000 rpm and begins running out of steam en route to a 6,500 rpm redline. The V8, on the other hand, loves to be wrung out to its 7,500 rpm redline. If you’re used to the high-revving four-cylinders and torquey V8s of the past, the Mustang’s engine options might have you scratching your head.

If you’re not used to the idea of a Mustang being a great-handling car, better throw that thought out the window, too. It takes a little time to get used to the Mustang’s long nose, but it’s a far easier car to see out of than the Camaro, and it has immense grip in the corners. The torque of the EcoBoost engine excels in blasting out of long mountain sweeping corners. Initial turn-in is sharp, and the steering is well-weighted.

It might not have the GT badge, but the four-cylinder Mustang is a great grand tourer. It has more than enough power to get you past transport trucks and recreational vehicles in short passing lanes, and it’s less fidgety over imperfect pavement than some of the high-performance V8 options. The chassis feels wonderful, and it’s a delight to have that big orange hood out in front of you, devouring the horizon.

The thing is, the four-cylinder just doesn’t feel quite as special as the V8 does. My daughter and I once drove down to a museum in Tacoma, Wash., in a V8 Mustang to see the original Bullitt movie car, and it was magical. The EcoBoost package is well balanced, and certainly no more power is really needed, but I miss the sound and feel of that mighty V8 rushing to redline.

Mind you, burning five litres less fuel than the V8 every 100 kilometres in city driving provides a strong argument in the four-cylinder’s favour. We camped, got our lines in the water, made s’mores and strummed the guitar beneath skies filled with the stars you can’t see in the city.

No, it’s not the V8. However, you could still make some pretty special memories in this turbocharged coupe. With a Mustang, maybe it’s not so much about what’s under the hood as it is about who’s in the passenger seat.

You’ll like this car if … you’re looking for a performance pony car that treads a little lighter on the planet.

Parked at the curb, the Twister Orange Mustang had people reaching constantly for their smartphones to take a picture. Curiously, most of those interested were young: Kids on skateboards and bikes seemed the most taken with the bright orange car. Kudos to Ford for still offering a range of vibrant colours in a sea of grey, black and white automotive paint. Consider getting those 2.3L fender badges removed for a cleaner look.

The heavily bolstered Recaro seats are the best thing about the Mustang’s interior, which is still very much a car built to its entry-level price point. The metallic-looking plastic dash is a bit less convincing than that found in the Dodge Challenger, and it’s otherwise fairly spartan in here. However, a workman-like interior fits the Mustang’s character and should age well.

Along with the high-performance upgrades under the hood, this Mustang featured a $2,600 handling package. It comes with larger 19-inch wheels, upgraded brakes, a limited-slip differential and magnetic dampers that can be adjusted for comfort on the street or cornering at the track. The latter alone is worth the price upgrade, but there’s a catch here. The sticky Pirelli summer-only sport tires provide excellent traction in the corners but have a treadwear rating of just 80. That’s less than half of something equally aggressive like a Michelin Pilot Sport Cup. Treadwear ratings provide a guide to how tires will wear compared with a control tire under similar conditions. Tires with a treadware rating of 400, for instance, are expected to take twice as long to wear down as tires with a rating of 200. 80 is very low for a street tire, and odds are you’ll be buying your pony car new shoes in pretty short order.

Ford’s Sync infotainment system is now bright and clear and connects easily to a smartphone. Ordinarily, with the V8 version, I’d say skip the fancy stereo and just roll the window down for an eight-cylinder soundtrack. But because the four-cylinder is so quiet in normal operation, the upgraded 12-speaker Bang & Olufsen stereo is worth considering.

At 383 litres of cargo space before folding the rear seat down, the fastback version of the Mustang is surprisingly roomy. The gas struts on the rear trunk lid mean that you can pack that trunk completely full, with rear seats that are far more usable than those in the Camaro.

Fast and roomy, with a surprising amount of practicality, the Mustang continues to edge out its pony-car rivals as the best all-rounder. The EcoBoost version may have all the performance you crave, but don’t be surprised if you find yourself still wishing you had a V8 under that long hood. 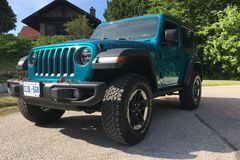 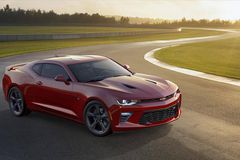 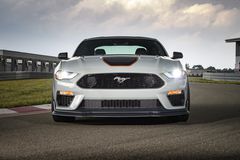