Everything seems bigger in the new Nissan Armada, which is “refreshed” from the Armada of previous years. This means the exterior looks a little different and the interior is redesigned, and all the connectivity and driver’s assistance features are updated, but the overall powertrain and chassis stay basically the same.

These updates are needed because the competition is improving all the time. Chevrolet’s classic Suburban is all-new for this year, the Chevy Tahoe was just refreshed, and the Ford Expedition has been the recent benchmark for full-size SUVs. Technology evolves so rapidly these days that it’s essential for manufacturers to keep up with the changes, because everyone else is doing so.

For this year, the 2021 Armada has a much larger central display screen (12.3 inches now, about twice as big as the 2020), and the digital information display between the speedometer and tachometer gauges is also boosted to seven inches from last year’s four. There’s a wireless phone-charging pad and wireless Apple CarPlay (Android Auto must still be wired) and WiFi hotspot capability. In other words, nothing ground-breaking, but stuff you now expect from a $70,000-plus vehicle.

The heart of the Armada is its 5.6-litre V8 engine, which really is a beast. Nissan says it’s more powerful because it can now produce 400 horsepower – a boost of 10 hp over last year. That increase is because it’s been tweaked to accept premium fuel, so if you don’t mind paying an extra 20 cents a litre for an increase you’ll never even feel, then you’re welcome to do so. Thankfully, it will still run just fine on regular fuel, and you’ll still be able to make 413 lbs-ft of torque and tow up to 8,500 lbs.

This will bump up your fuel consumption, of course, and that huge engine is not forgiving. It’s just as well the gas tank holds 98 litres of fuel because you’ll get through it quickly. Official Canadian ratings have the Armada slurping 12.9 L/100 km on the highway and 17.5 in the city. My own average was 14.2, which was a surprising improvement over the official 15.4 L/100 km combined rating.

That’s the price you pay for something so large and capable. Here in Canada, we only get the all-wheel-drive version with its high and low transfer case and clutch packs, which can send up to half the torque to the front wheels. The independent double-wishbone suspension at the front and back is unchanged, which means it’s still a little cramped in the third-row seats after the space is found for all that hardware underneath. Like any three-row SUV, if you need to carry adults back there, buy a minivan.

The ride itself is very comfortable, even on the 22-inch wheels that come with the Platinum trim level of the test vehicle. The suspension soaks up the bumps, though it does wallow around the corners. The seven-speed automatic transmission is also very smooth, so much so that you scarcely think about it. I didn’t tow anything during my time with the Armada, but I got the impression it wouldn’t make much difference. An integrated trailer-brake controller is now standard, as is Trailer Sway Control, which senses if your trailer is beginning to sway and will apply the brakes to address it.

The Armada looks blockier now, thanks to a resculpting of its front grille and fenders, as well as a redesigned rear bumper with updated LED lighting all around. It’s not unattractive, and it certainly looks like it means business.

The cabin is very comfortable, with well-padded leather seats throughout. The third-row seats are not so plush, but it is easy to get in place back there thanks to a one-touch lever that flips each of the outboard second-row seats out of the way. It’ll be a challenge if there’s a child seat already latched into place in the second row, though.

The quilted leather of the Platinum edition is nice, but there’s not much that truly feels “special” for the driver or passengers. The moonroof is a small window over only the front seats – where’s the panoramic sunroof that can open up the entire cabin? Where’s the push-button shift-by-wire transmission controller that allows space above and beneath the centre console? Why is there a manual foot lever instead of an electronic switch for the parking brake on a vehicle that, after all taxes, can clock in above $90,000?

This is where your money goes. The Armada is powerful and capable and will whoosh you and your family and your full-sized boat or RV trailer anywhere you want in quiet comfort. Yes, it’ll cost you in fuel, but other large SUVs aren’t much better.

All the driver’s assistance you’re looking for is available, but that said, I did experience some glitches. I gave up on the lane-keep assistance because, if I wasn’t actually doing the steering myself for a short period, the Armada would nudge right up to and sometimes over the lane markings. This could have been a poorly aligned sensor in the windshield, fixable under warranty, but even so. As well, the wireless Apple CarPlay would sometimes not recognize my iPhone, and I had to plug it in. I guess this is a first-world problem.

The Platinum edition provides screens in the headrests of the front row to entertain passengers in the second row. These days, however, most people prefer to use phones or tablets, so such systems tend to be a waste of money.

The Captain’s Chairs edition of the Platinum adds an extra $1,000 to the price and removes the second-row central seat in favour of a handy storage console. That console can be removed if you really want to (maybe for easier access to the back if child seats are on both second-row seats), but it’s not an easy thing to do and needs a torx-head screwdriver.

The new Armada needed to be brought up to date, and Nissan’s succeeded in doing so, while keeping it powerful and capable and comfortable. It doesn’t really surpass the Chevrolet Suburban or the Ford Expedition, however, so make sure to consider those two and price them all carefully if you’re looking for an SUV this large. 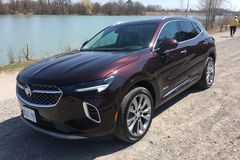 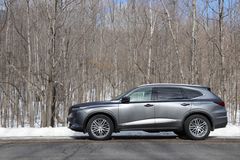 Jeep leans on nostalgia in reviving the Wagoneer SUV, minus the wood panels
March 11, 2021 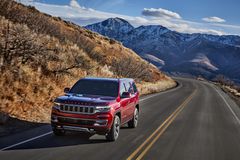