Don’t tell my son, but apparently he cramped our style when he was growing up. According to auto-industry demographics, parenthood meant we were supposed to drive an oh-so sensible three-row SUV during those years of hockey-practice, violin-lesson and school-run carpooling.

Only now that we are (fingers crossed) empty-nesters are we free to treat ourselves to a two-row SUV – or more to the point, a two-row with style.

Actually, my wife and I prefer cars. A Golf GTI would do nicely. But most Canadians do want SUVs or crossovers, hence Volkswagen’s motivation to cater to those now resurfacing from their child-rearing years. According to VW, five-seaters accounted for 58 per cent of intermediate SUV sales in Canada last year, so despite the popularity of its seven-seater Atlas, VW still had room to grow its share of the SUV market.

The Cross Sport was largely a VW North America initiative, says Stephen Warrick, the VP in charge of mid-/full-size product management, and “it’s really about the style.”

Adds VW Canada director of product planning, Patrick Danielson, “The Atlas is for family. The Cross Sport is for me.”

Crossovers with coupe-like styling are well established in the luxury segment, but VW’s distillation of its three-row Atlas into a more eye-catching two-row is arguably a first among mainstream intermediate crossovers. Recent new two-row mid-sizers from Chevrolet (Blazer) and Honda (Passport) have gone for a more off-road look, while the Atlas Cross Sport projects a city-slicker persona.

Still, it’s not really unique in the segment; the Ford Edge has a very similar silhouette.

Like Ford, VW didn’t let its sheet-metal artists get carried away. The Cross may sacrifice some of the regular Atlas’s space and utility, but it’s still very competitive on both counts with other two-row mainstream mid-sizers. At 4,966 mm long, the Cross is 144 mm shorter than Atlas but longer than the competition; it’s 58 mm lower than Atlas but about average among other five-seaters in height.

Like the Atlas, the Cross Sport offers a 2.0-litre turbo four-cylinder and a 3.6-litre naturally-aspirated V6, both paired with an eight-speed automatic. But now AWD is standard with both engines (the 2.0 is FWD on the regular Atlas).

The Cross Sport “grade walk” will be familiar to Volkswagen shoppers. The base $38,995 trim is called Trendline and is available only with the 2.0 engine. A mid-level $45,195 Comfortline trim can be had with either engine, with a tow package (up to 5,000 lbs) thrown in if you spring the extra $2,200 for the V6. The top trim is the $54,495 Execline, which comes only as a V6 and is the only version which can be frosted with the $1,690 R-Line cosmetic package.

Yes, it’s more expensive than the (2019) Atlas, which starts at $36,740 and tops out at $53,490. Some of the difference is explained by higher content, such as AWD on the base four-cylinder, a standard panoramic sunroof on the Comfortline and interior upgrades. But there’s nothing new about charging more money for “less” car, when “less” means a lower roof and sexier rear haunches. And now that the kids are no longer leeching you dry, you can afford it.

With its 58-mm lower roofline and raked rear A-pillars, the Sport Cross looks more rakish than its three-row sibling, but the fastback-coupe cliché doesn’t go as far as similar products in the luxury segment. The Cross Sport also gets a new grille, unique front and rear fascias and full-LED lighting. Wheel sizes up to 21-inches are available.

Up front it’s much like being in a regular Atlas – plenty comfortable, though the driving position is rather low, and the Trendline has only six-way manual adjustment. The bluff dashboard, close cowl and unfashionably upright A-pillars create a somewhat old-fashioned effect, in contrast with mod cons like the available digital gauge cluster and eight-inch touch screen. Happily, the HVAC controls are all hard buttons and knobs. In the rear, the quasi-coupe profile sacrificed a little headroom compared with boxier two-row rivals, but most other passenger-space dimensions are above average.

You’ll need the V6 for peak towing, but otherwise the 2.0-litre is a sweetheart that should meet most needs. Its zingy four-cylinder rip arguably sounds better than the V6’s throbby gruffness, and its only-marginally lower peak torque (258 lb.-ft. vs. 266) is supplied at much lower (read: usable) engine speeds. Plus, its fuel consumption is up to 12-per-cent lower on the same regular-grade gasoline. When the going gets curvy, light-and-lively steering and responsive handling make for a fun drive.

Among its peers, only the Honda Passport has more seats-up cargo volume than the Atlas’s 1,141 L; with the seats flattened, it’s basically a tie. And the seats really do flatten when folded, at a level slightly lower than the rear deck. There’s no formal storage below the rear floor, but there’s space to stash some stuff alongside the spare tire.

The existing Atlas is already a compelling blend of utility and driving pleasure. The Cross Sport loses two seats and adds a little more pleasure, but whether you buy into the more emotional design is for your eyes to decide. 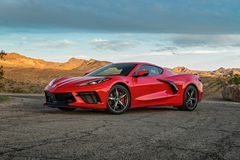 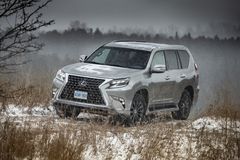 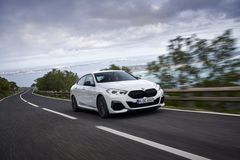