A Tesla Model S or a Porsche Taycan? Debating which $100,000 electric luxury sedan to buy is a bit like choosing between Hermès and Gucci luggage, or Bang & Olufsen and Bowers & Wilkins loudspeakers. It only matters if you’re rich, and either way, you’re unlikely to be disappointed.

However, the choice between the two fancy cars is not purely aesthetic. Itʼs also a symbolic choice between the New World and the Old. It’s Elon Musk’s eccentric tech-bro venture-capital-fuelled vision versus Porsche’s heritage-inspired brand for wannabe race-car drivers. Both have cult followings.

For this real-world faceoff, we have a 2019 Tesla Model S 100D and a 2020 Porsche Taycan 4S, but it’s not exactly a fair fight. For one thing, the first Model S hit the road in 2012, and although it has been updated regularly, it still looks and feels much the same as it did back then. (That the aging Model S is still the benchmark is a testament to how far ahead of the curve Tesla was.) For another thing, this particular Taycan is brand new, while the Model S has covered 18,400 kilometres and – here’s the kicker – it was lent to us by Porsche.

Why would Porsche do such a thing? Early headlines about the Taycan’s shorter rated driving range, compared to the older Tesla, must have stung the German automaker. Porsche says itʼs raring to show that its car is more than a match for the Tesla in real-world conditions. We shall see.

If you’re in the market for a $100,000 sedan, chances are you’re also a regular at a Rocky Mountain ski resort, a Muskoka lakefront mansion or a cabin in the Laurentians, and you will, therefore, want a car that can take you there. (Assuming, of course, that lockdown restrictions allow it.)

Parry Sound, on Georgian Bay, is a key Ontario cottage-country destination, 234 km away from our starting point in Toronto. In theory, the Tesla could make the round trip without charging, but the Porsche certainly won’t.

Setting off, both cars are in “range” mode to maximize distance. In that mode, the Porsche limits itself to 110 km/h, which is slightly disconcerting on one of the busiest highways in Canada. Cars whoosh past as if we’re standing still while we trundle along in the slow lane.

At least the cockpit of the Taycan is an excellent place to be. You sit very low and look out over a hood meant to evoke Porsche’s classic Le Mans race cars. Compared with the Model S, the Taycan’s cabin feels more intricately designed and more solidly built, but the many black touch-screen panels unfortunately show every smudgy fingerprint.

The Tesla isn’t automatically limited to 110 km/h in range mode, but we stick to that speed in both cars for the long haul west across Highway 401 and north on Highway 400.

The cabin in the Model S lets in more wind and road noise, and the ride isnʼt quite as smooth as the Taycanʼs. The Model S, however, is much more spacious. It offers room to luxuriate, and the regular-sized rear doors make getting in easy for passengers. (The Taycan’s rear doors are Hobbit-sized.) Five people in the Tesla would fit just fine, but five adults in the Porsche would feel uncomfortably intimate.

By the time we roll in to Parry Sound, the temperature is well below freezing, and both cars have covered just under 240 km.

Extrapolating from the battery power consumed over that distance, the Porsche’s total range would be approximately 355 km (under these particular conditions). That’s more than its EPA rating of 327 km. Meanwhile, the Tesla’s maximum range would be 386 km, about 150 km less than its EPA rating, although still more than the Porsche. These rough calculations are far from scientific – your range will vary – but this broadly aligns with what tests by Car and Driver magazine and others have found; the Taycan’s range is underrated.

One more strange discovery: The Porscheʼs range estimate for itself was overly optimistic by 24 km on the outbound trip. The Tesla’s estimate – even using the car’s “rated” instead of “ideal” range estimate – was off by a whopping 87 km. Maybe it was owing to the cold weather, or because of the way this Model S has previously been driven, but that’s a significant margin of error.

After sitting unplugged in the cold overnight, the Tesla is left with an estimated range of 165 km and the Porsche with 104 km.

Originally, the plan was to recharge on the way home in Barrie, Ont., so we could try the only Electrify Canada 350-kilowatt ultrafast charger in the area, but the Porsche doesn’t have quite enough juice left to make it there, and the Tesla will need to recharge, too.

Faster recharging is the Taycan’s trump card, but there are currently only a handful (16 in total) of these ultrafast Electrify Canada stations in the country. Tesla’s Superchargers don’t recharge a car as quickly, but the network is massive by comparison, with more than 80 locations in Canada, according to the company’s website.

Instead of Barrie, we make a pit stop at the Tesla Superchargers in Parry Sound and at a new 250-kilowatt Petro-Canada charger nearby. After an hour, both cars have more than enough juice to make it home. In hindsight, 40 minutes of charging would have been enough.

The waiting isn’t so bad. Both charging stations have coffee shops and food nearby, but the real MVP on this road trip is the Tesla’s in-car karaoke feature. But frighteningly, the Tesla keeps displaying karaoke videos on the big screen once charging is done and you’re speeding down the highway. (It’s distracting and yet another reason to regulate in-car infotainment systems.)

On the return trip, the Porsche actually underestimated its own range slightly, while the Tesla was still overestimating its range by a big margin.

In the real world, the driving range and charging-speed differences between these two cars are less significant than they appear on paper. Neither car has dealt a killer blow to the other one here. Porsche fans will feel vindicated that the Taycan only gave up 31 km of real-world driving range to the Model S. Tesla fans will note that the Porsche’s fast-charging advantage is pointless without capable, ubiquitous charging stations.

The answer to the question – Porsche Taycan or Tesla Model S – should come down to what type of car you want, not range or recharging. If you want a family car with spacious rear seats, the Tesla Model S is the better choice. If you want a sports car with usable rear seats, the Porsche Taycan is your best option. The Tesla is a better value, starting at $101,990 ($113,900 as tested) compared with the Porsche’s $120,000 price ($150,050 as tested). How much that actually sways decisions in this rarified price bracket is debatable.

Elon Musk clearly felt some pressure from Porsche. When the German automaker announced the Taycan had set a new lap record on the challenging Nurburgring Nordschleife racing circuit, Tesla responded by making an even faster Model S prototype. This rivalry – Tesla or Porsche, New World versus Old – is only just beginning.

The fact that either car can whisk anyone – well, anyone who can afford it – to a countryside getaway without burning a drop of fuel is a miracle of modern technology.

This comparison was conducted prior to the imposition of new lockdown restrictions in Ontario.

German automakers are charged up and ready to take a run at Tesla
Subscriber content
January 1, 2021 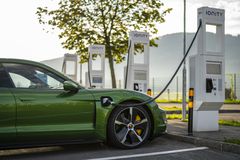 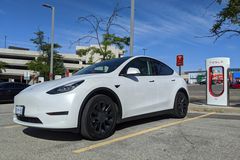 Opinion
How EVs are meeting the need for speed
Subscriber content
December 2, 2020 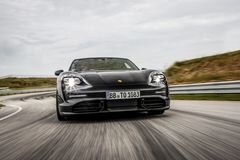