Over the past 15 years or so, the idea of an ultrahigh-performance SUV has gone from some kind of alternate-reality oxymoron to an established and accepted automotive subgenre. In light of which, the most surprising thing about this new-for-2018 muscle truck is that it took Dodge so long to give the Durango the in-house speed-shop SRT treatment.

Yet even now, Dodge is arguably still holding something back. There’s nothing meek about a 6.4-litre V-8 pounding out 475 horsepower, and yet … The Jeep Grand Cherokee – which shares its underpinnings with the Durango – has not only been available with the same 392 engine for years, but is also now available with a totally demonic supercharged V-8 worth an astounding 707 horsepower.

Engine aside, however, this version of Dodge’s three-row full-size SUV is the complete performance package. The potential for huge straight-line speed is kept in check by huge Brembo brakes, fortified suspension with Bilstein adaptive shocks, and 20-inch “Goliath” wheels wrapped in squat Pirelli tires. Depending on which of the seven Drive Modes you select, the full-time all-wheel drive can send up to 70 per cent of drive rearward, and the 8-speed automatic can snap off upshifts in as little as 160 milliseconds.

Dodge touts the SRT as North America’s fastest seven-seater SUV. According to our arithmetic, however, the standard second-row captain’s chairs and two-person third-row bench add up to six seats. And although a three-person middle bench is available, that’s part of a Lightweight Performance Package that deletes the third-row seat – which means the fastest version of the SRT isn’t even a six-seater, let alone a seven-seater.

Dodge doesn’t specify whether the claimed performance numbers – 0-60 mph (0-97 km/h) in 4.4 seconds and a 12.9-second quarter-mile pass – are based on the five-seat configurations.

Perhaps that’s a moot point, because independent testing by U.S. auto-enthusiast magazines reports 4.6 to 4.7 seconds for the 0-60-mph run, which is a tick or two slower than the Mercedes-AMG GLS63. Then again, MSRPs for the Mercedes three-row hooligan start at about $136,200 – far north of the Dodge’s $72,495.

The independent numbers still equate to a 0-100-kmh time of less than 5 seconds, which is wickedly fast by any measure. And in the SRT’s case, the sensation of speed is amplified by the soundtrack. Even driving sedately, the tailpipes evoke a distant thunderstorm (maybe not distant enough, when you’re not in the mood). Boot the loud pedal and you unleash a satanic symphony of crackle and gargle and rumble and howl that renders pitifully inadequate the standard cliché descriptor, “roar.”

Put another way, the SRT is as far as you can get from earning the metaphor “iron fist in a silk glove.” Loud and proud would be more like it. For my own tastes, I’d like the SRT better with a little less aural fury. But if subtlety isn’t your thing, the SRT serves up a blend of speed, space and swagger that is unique at the price.

Any Durango looks like it means business, and the SRT amps that up with functional hood air ducts, a unique front fascia, wide-body styling and Pirelli rubber on 20-inch wheels.

Even with a $3,250 SRT Interior Appearance Group (carbon-fibre accents and “premium-wrapped IP bezel”), the SRT’s cabin doesn’t really look worthy of an $80,000 vehicle, but no complaints about comfort on the test truck’s $1,500 12-way Laguna leather seats. Niggles include stout A-posts and a large door mirror that compromise front-three-quarter vision; and the overcrowded 300-km/h analogue speedometer is virtually unreadable (although a digital readout is also provided). For passengers, the Durango is big enough to be roomy in absolute terms, with adult-friendly third-row seats, but many newer rivals contain even more space within smaller outsides

The SRT isn’t just a straight-line wonder. It feels remarkably athletic for its size and, although body lean does build up through long curves, U.S. auto-enthusiast magazine tests confirm impressive numbers for lateral grip and stopping distance. And yet the ride, while clearly stiff and sporting, is actually surprisingly civil.

The 8.4-inch screen seems small for an $80,000 vehicle, but it accesses lots of connectivity and infotainment, as well as letting you adjust the performance – and even measure the results – through the SRT Drive Modes and Performance Pages programs. Autonomous driver-assist nannies (including lane-departure warning, lane-keep assist, adaptive cruise and active emergency braking) are reserved for a $1,450 option package.

The Durango’s cargo-volume numbers are all a little above average – but not best in class – among midsize SUVs. Run-flat tires enable some extra storage under the deck floor, and the seats fold helpfully flat.

It’s a rare blend of sensible and deranged that may not be for everybody, but might just be everything for somebody. There’s nothing on the market with comparable power at a comparable price.

Car Review
Genesis brand introduces a third sedan with the G70
May 8, 2018 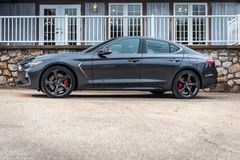 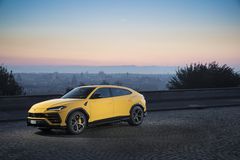 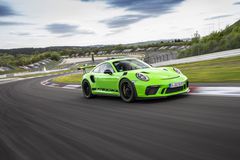 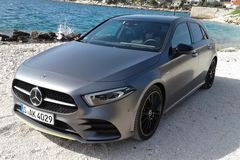