Oh yes, just what the doctor ordered. It’s an Aston Martin, only this time it’s a terrifying torque monster ready to rip your face off and melt your mushy innards with raw acceleration. You thought Aston Martins were for dandies and Bond-boy wannabes? No sir. This is the DB11’s evil foil, the Joker to its Batman, the Venom to its Spider-Man, the … the point is, it’s bad. Real bad.

Aston Martin promised to make one new car every year for seven years, but in 2018 so far, they’ve launched three new models and it’s only August.

Marek Reichman will not be taking summer off. He and his design team – and the engineering department, and most every other employee – have been working evenings and weekends to make the remarkable turnaround of Aston Martin stick.

It’s a classic rags-to-riches-to-rich-guy’s-garage story. Just six years ago, the company seemed irrelevant, as if its best years were far behind. Now? As of last quarter, Reichman says, Aston Martin is the fastest growing automaker by percentage sales growth.

Some people clearly have more money than ever, and Aston Martin is doing its darndest to take more of it. Reichman spends his spare time sketching concepts for the coming mid-engine sports car and is preparing to launch an Aston Martin submarine and an Aston Martin condo tower in Miami.

Those ventures, however, pale in comparison with Aston Martin’s latest ambition; the Brits want to muscle into Ferrari territory and they’re doing it with the face-melting torque-monster that is the DBS Superleggera. It has Ferrari’s 812 square in its sights.

“Our understanding of the customer that buys this car is that they tend to have owned a business, created their wealth, and now collect cars. It’s almost more of a leisure product. It’s there to be enjoyed,” says Paul Barritt, the vehicle line director for the DBS.

“There is a group of customers who … just want the top of the range, and they’re only ever going to have that,” he says.

These are not cars you drive because you need to get somewhere.

The DBS is a front-engine V-12 coupe with lots of carbon-fibre accoutrements, a high-downforce low-drag aerodynamic setup, 715 horsepower and a frankly troubling 664 lb-ft of torque at 1,800 rpm. All that power is sent through two tortured rear wheels. The Ferrari has more power, but the Aston has more torque – the stuff that makes your head immediately snap back when you flatten the throttle.

It’s tourist season in the Alps, as holiday makers from northern Europe make their way south. Picture the crossing of Hannibal with his armies and elephants, but replace those with caravans and fully loaded station wagons.

Passing one of these caravans on the narrow winding roads would be difficult in almost any other car, but the Superleggera warps past, shrinking the distance to the horizon exponentially. It feels like being punched in the gut, pummeled into the seat.

It does wheelspin throughout second gear, even with all the electronic safety systems engaged. The engine computer limits torque in the first three gears to avoid exploding the gearbox. But still, this brute of an engine spins the tires. It cannot be contained.

Turn-in, with the suspension in soft-ish GT mode, can be unnerving. The car leans over and it isn’t entirely obvious if it will stick as the body almost floats over the road, but stick it does. Stiffening up the adjustable suspension keeps the chassis under control and gives you enough confidence to use more of the power. Carefully.

It’s a beastly thing to drive, which is what makes it as exciting as any Ferrari. Not as easy to exploit, but nevertheless a worthy rival. Five years ago, to think an Aston could compete against the best from Maranello would’ve been heresy, but here is proof.

That’s not to say the DBS is without rough edges. The automatic gearbox occasionally gets confused, shifting down too many gears, and then up, and then down, shunting the car back and forth. Also, the driving mode switch on the steering wheel – which selects between GT, Sport and Sport+ modes – sometimes doesn’t react when you click, or reacts too slowly. Barritt says they’re working on fixes for these issues before the car arrives in Canadian dealerships in December.

Perhaps the biggest issue, though, is that the DBS doesn’t seem different from the DB11, certainly not $100,000 different, which is the price gap between them. The DBS is faster and rowdier, but the interiors are nearly identical. The motor is the same, but with the turbo boost cranked up. And only an aficionado would be able to tell it apart from a DB11. For my $100,000, I’d want something a bit more exotic.

For those who need to have the most expensive Aston Martin to let them know they’re still alive, this evil machine will do just that. Just what the doctor ordered then, but make sure your heart can handle it.

The family resemblance to the DB11 is obvious, maybe too obvious, but it’s not bad to resemble the most beautiful car on the road. The DBS is lower and 20 millimetres wider. The clamshell hood is made of carbon fibre, as is the trunk lid.

It would be nice it felt more exotic, given the price. The leather and intricate stitching is as good as it gets.

It’s called Superleggera (superlight) but it’s only 72 kilograms lighter than the DB11. The square steering wheel feels alive and alert, even when you’re not going warp-speed. Zero-100 km/h takes 3.4 seconds; 0-161 km/h in 6.4 seconds.

The Mercedes-sourced infotainment system is the last-generation unit and already feels dated.

The rear seats are tiny, but useful for luggage. The motorized centre armrest is an unnecessary but fun gimmick. Trunk space is as generous as you’d expect in a grand-tourer.

An expensive brute in a carbon suit. 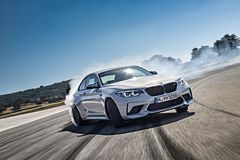 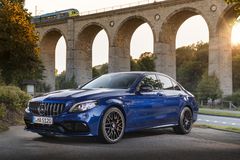 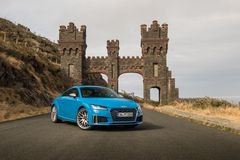