In an electric car, range anxiety can make it tough to enjoy the scenic route. Sure, 201 kilometres in the e-Golf and 242 km in the Leaf is more than most need for a commute or even a weekend to the country. But even during short city trips, you keep double checking: “How are we doing for range?”

But in a couple of hours on the winding canyon roads outside L.A. in Hyundai’s new Kona Electric, I checked the range exactly twice. The gauge read “296 miles” [476 km] when we left the hotel with a full charge, and “235 miles” [378 km] when we reached the destination 73 km away. And that’s after driving fast with a heavy foot on the gas (er, power?) pedal.

The Kona Electric, is, yes, the pure electric version of Hyundai’s popular cute-ute – Canadians have bought 10,852 regular Konas so far this year – and it will be the first electric subcompact SUV on the market.

It’s front-wheel drive only. All-wheel drive would require an extra motor, which would take up space and require a smaller battery than the Kona’s 64 kWh power supply.

The electric motor delivers 201 hp (150 kW) and 290 lb-ft of torque. It’s torquey as heck. At least twice, the wheels spun when we accelerated fast.

Hyundai says it can do 0-100 km/h in 7.6 seconds – the same as a Bolt. It’s got three driving modes: Regular, Sport and Eco. I usually stick to Eco in an EV because I’m worried about running out of juice.

“Sport shouldn’t affect your range,” said Jerome Gregeois, senior manager, Powertrain and Eco Technologies with Hyundai. “What could happen is, if you’re driving in Sport mode, you drive faster and because you drive fast, you use more energy.”

Like all EVs, it has regenerative braking – energy from slowing down recharges the battery – and you can change the level from zero to three using paddle shifters on the steering wheel. It’s simple, and it works well.

That also enables you to drive with one pedal. By holding down on the left paddle, you can use the regenerative braking to come to a complete stop. It’s a gentle stop, but, once I got used to it, I didn’t use the brakes much.

And like in the regular Kona, handling is sharp. I mostly kept the Kona Electric in Sport mode, because it was fun. And I did, indeed, go fast.

It had plenty of range in L.A., but what about in Regina in January? Generally, EVs lose about 35 per cent of range when it’s below -20 C. But the Kona Electric should only lose about 21 per cent, Hyundai said, thanks to a heat pump that uses less battery power than an electric heater. The Bolt doesn’t have one.

We didn’t get a single second glance on the road. That’s probably because the Kona Electric looks like, well, a Kona. It’s better-looking than the Bolt or the Leaf, but the e-Golf still holds the crown as the least EV-looking EV.

In place of the standard Kona’s Tonka-truck mug, the electric gets a closed grill that might take some getting used to. There are a few other minor changes to reduce drag, and they make the Kona Electric look a little more grown-up than the gas version.

Inside, it’s got the same interior room as the standard Kona. That means a snug back seat and about 544 litres of cargo space with the seats up. That’s less than the Leaf (668 litres) but more than the Bolt (479 litres). The interior is more upscale than the Bolt or Leaf, as well.

Hyundai expects to see 4,000-5,000 Kona Electrics come to Canada, likely starting in December. Hyundai hasn’t released pricing info yet but says it will be competitive with the Bolt, which starts at $44,400.

Could the Kona beat the Bolt? With its extra range, this tiny E-SUV just might – if the price is right. 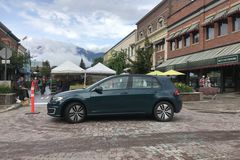 What happens to an electric vehicle in winter?
August 11, 2018 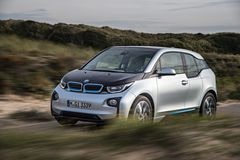