According to a panel of 54 industry experts, the Genesis G70 is the best car available in 2019. The North America Car of the Year award, presented at the North American International Auto Show in Detroit, ushered the G70 into the exalted company of former winners such as the Honda Civic, the Volkswagen Golf and the Chrysler PT Cruiser.

Here’s what’s worrying: The award is no guarantee of success. One only need look at 2013′s winner, the Cadillac ATS, to see that a highly rated car doesn’t necessarily translate to a sales victory. Cadillac’s attempt to chase down the BMW 3 Series ended with a whimper, as the company discontinued its sport sedan with the 2018 model year.

With the G70 – which also takes aim at the 3 Series – is Genesis being given a first-place finish for tilting at windmills? Every luxury automaker these days relies on sales of crossovers to fill their coffers as the popularity of the sedan fades. Instead of Genesis, might Hyundai not have more accurately named its luxury division Hubris?

History will judge whether the G70 represents a good long-term business case. But examined as a car of the moment? It's flat-out excellent.

Better yet, Genesis will give you something BMW no longer will – a proper manual transmission.

It’s only available with the 2.0-litre and rear-wheel drive, but the choice is there. The Germans have taken the pragmatic viewpoint that the take-rate is too low to bother with their new model. Hyundai, of which Genesis is the premium division, wants to show they care about enthusiasts.

The manual version is fun and interesting and recommended, but a week with the 3.3-litre twin-turbo V-6 was eye-opening. All-wheel drive is standard on all Canadian models, and a rough estimate on pricing for the M340i xDrive puts the gap between the two vehicles at more than $7,000. It’s not the price tag that’ll impress you; it’s the performance.

Compared with the current 3 Series, the Genesis is more playful, more enthusiast-oriented and just plain more fun to drive. It’s still possible to spec out an enjoyable 3 Series, but you have to get all the options exactly right. The G70 feels like a driver’s car no matter the trim.

The all-wheel-drive system has a clear bias to the rear, and the car pivots under throttle. The driving modes are simple to understand and activating sport mode even tightens up the seat bolsters.

While the V-6 doesn’t sound particularly distinctive, the G70 grips and goes with gusto. Naturally aspirated rivals such as the Lexus IS350 shouldn’t even be mentioned in the same sentence. The G70 is not quite a light car, but it feels nimble, agile and eager.

Then there’s the interior, which is uncluttered and simple to understand. The quilted leather seats look great. The touchscreen interface is well laid out and easy to understand. The ride is quite firm, but the G70 still manages to give off a luxurious feel.

Having said all that, Genesis has a long, uphill climb ahead of it. Most buyers interested in the G70 will be drawn to it by its value, while Mercedes-Benz, BMW and Audi will be able to sell plenty of sedans simply because of the badge on the nose. Just know that should you choose to give a Genesis G70 the only award that really matters – your own hard-earned cash – you’ll be laughing all the way to the bank.

The G70 looks great from all angles except perhaps the front. Provinces with mandatory front license plates are going to clutter up that big grille even further.

The G70 and the Kia Stinger share some basic architecture, but the shorter Genesis has a little less space for rear-seat passengers. Car seats for kids fit, but taller drivers might cramp their passengers.

Hyundai’s H-Trac all-wheel-drive system is not as complex as some competitors, but it is competent. Fitted with winter tires, it handled slippery conditions easily. Better yet was its 90-per-cent rear-drive bias in sport mode, giving a proper sport sedan feeling.

Nothing about the G70′s technology suite can really be considered revolutionary. From the available driver’s assists to the touchscreen interface, most of the tech can already be found in upper-level Hyundai products. However, because it’s been made for the mainstream, it’s all very simple and intuitive to use.

The G70′s 297-litre trunk is a little small for the segment. It does, however, have a useful automatic opening feature. Simply stand behind the car for a few seconds and the trunk pops open. Perfect for the grocery run.

A fast, fun-to-drive, well executed luxury sport sedan. You’ll like this car if the driving experience matters more than badges – or trophies. 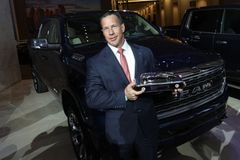 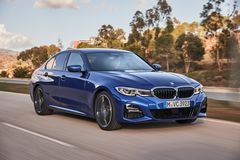