Does Canada really need another high-priced, super-powerful SUV? Maserati thinks so, which is why the Levante is now available with a V-8 engine under the hood, as well as larger wheels, better driver’s assistance and some unique styling tweaks.

Now, though, you can more than double that base price for the new Trofeo edition, which produces a stonking 590 hp. Slightly more practical owners may prefer the 550 hp of the new GTS edition, which lists for $137,500. It also uses the turbocharged V-8 engine adapted from the Quatroporte sedan, and while both versions make 538 lbs.-ft. of torque, the GTS is tuned to not pull quite so strongly to the red line.

That is a comparative statement, by the way. Both engines pull strongly – very strongly. They’re built by Ferrari and fitted to Maseratis, after all. The Italian automaker is very clear that its target is Porsche, whose Cayenne and Macan have been extremely successful in all their iterations of power, and Maserati claims to offer more standard features for less money.

I drove both the GTS and Trofeo for several hundred kilometres each on a variety of roads south of Carmel, Calif., and both engines offer plenty of get-up-and-go, as you’d expect. The engineers spent a great deal of time explaining the torque-curve differences between the two and the variations between the Ferrari engines, but on those California roads, stuck behind slowpokes half the time, the subtleties were lost on me.

Stomp on the gas, and these SUVs are not subtle.

In fact, Maserati doesn’t even really call them SUVs. Instead, they are “elevated coupes” despite having four doors. Yes, they are all-wheel-drive, so the engines have been adapted to include a front differential, and they’ll raise at the press of a button to help clear ruts and rocks, but these aren’t off-roaders. Their suspension will lower 10 mm in the Sport setting to hug the road a little closer. The Trofeo even has a “Corsa” or Track setting that drops the vehicle down an additional 25 mm and tightens everything.

Just as well. The Maserati Levante Trofeo’s top speed is 304 km/h. If you do the conversion from metric into mph, you’ll realize this is the first Maserati SUV that does 185, like Joe Walsh’s car in his Life’s Been Good To Me song. I took their word for it; I didn’t want to lose my licence, so that now I don’t drive.

The Levante is a very attractive vehicle. I used to think it was so-so, but since its head of design, Klaus Busse, explained all the curves and swoops, it all makes so much more sense. There’s no B-pillar because there doesn’t need to be, he says, and it adds to the all-important elegance of the shape. As for the side ports that reminded me of a Buick, they’re important ventilation: “We’re living in a world of fake now,” says Busse, “with fake inlets, fake outlets, even fake exhausts. But we’re the real thing. At Maserati, if we do a hole, it’d better let air in or out.”

And the grille, which I’ve never really liked? “It’s just a frame,” says Busse. “Its shape is not important. It’s a frame for the trident (badge). It’s all about the trident.” And you know what, I kind of like it now.

“If the exterior of a car is the love affair that gets you in to the relationship, then the interior is the marriage,” says designer Busse. “It’s where you spend the time,” for better or for worse. All Maseratis are commonly criticized for sharing parts with cheaper FCA vehicles, like the starter button from a Chrysler 300 and the 8.4-inch UConnect touch screen from a Jeep Grand Cherokee. “We have to start somewhere,” said an engineer.

In the GTS and Trofeo editions, there’s more money available for better materials, so they get even nicer, perforated leather and an alcantara headliner. There’s real carbon-fibre in the Trofeo, too, as well as stitched trident logos on the headrest. The Trofeo’s paddle shifters are also carbon-fibre, though mounted to the steering column, not the wheel. I hate this, because you can’t change gears at full lock. “They’re not supposed to be perfect,” says Busse, “but they’re satisfying to use and they have character.” He’s right, too. Now I love them, I think.

Well, this is a no brainer. The car is quicker – the Trofeo claims a zero-to-100 km/h time of 3.9 seconds, and it handles beautifully on curving roads. The GTS takes 4.2 seconds to reach the same speed, which is hardly shameful. Peak torque starts at 2,250 rpm in the Trofeo, 2,500 in the GTS, which is not up to BMW standards but nothing to cause embarrassment. And besides, as Busse says, a Maserati gives you confidence. “In a Maserati, in a Levante, you don’t have to prove anything to anybody anymore.” Which is Maserati’s way of settling for more tractable power beneath the 700+ hp that Ferrari’s finding in a similar engine.

There’s more driver’s assistance in the Trofeo, and it’s pretty good, but it’s pretty good in the new Toyota Corolla, too. You should not have to pay a $50,000 premium for things like adaptive cruise control or blind-spot monitoring.

Call the Levante an “elevated coupe,” and it starts to make more sense. There’s only 580 litres of space behind the 60/40 folding seats, or a better 1,614 litres when the seats are folded flat, but this is not intended as a cargo carrier. Your dog will hate you forever for the cramped space, and you’ll hate your dog for all the hair on the carpet.

It’s only an 8 because it’s elegant and powerful. Take practicality of service and value for money into account and the rating will drop like a rock. But if you want a Porsche Cayenne Turbo with more features for less money or you prefer Italian flair over German efficiency, then maybe the V-8-powered Levante should be your go-to SUV. 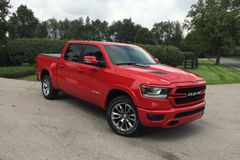 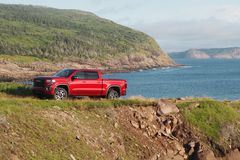