The Cabot Trail sweeps around the rugged coastline of Cape Breton, winding through lush pine forests and along high cliffs overlooking the Atlantic. With ample hiking and wildlife watching, abundant Maritimes culture and roadside restaurants offering some of the country’s best seafood, this is perfect territory for a family road trip.

Subaru chose this spot to unveil its new 2019 Ascent for that very reason: With its three rows of seating, ample cargo space and 19 cup holders, this SUV is designed for the modern family on the move. The Ascent features symmetrical all-wheel drive, a boxer engine and seating for eight.

While Subaru’s lineup already includes popular offerings for 20-somethings (Impreza, Crosstrek) and empty-nesters (Outback, Forester), the previous lack of an SUV big enough to haul a family and all their gear ruled out a large swath of the car-buying public.

“It keeps Subaru customers within the family, and it’s also a huge opportunity to attract new customers,” said Ted Lalka, Subaru Canada vice-president. “When they see the Ascent, they’ll realize that we have something for everyone.”

The largest Subaru, the Ascent is benchmarked against competitors such as Toyota’s Highlander and Nissan’s Pathfinder, but it still feels like a Subaru in all the right ways. The Ascent’s brawny silhouette will be familiar to fans of the Outback wagon and, with 220 millimetres of ground clearance plus standard symmetrical full-time all-wheel drive, it is clearly intended to appeal to the same sort of active, outdoorsy buyer.

Despite some legitimate off-road capability, such as all vehicles in the mid-sized SUV segment, this one will spend most of its mileage shuttling kids and groceries from driveway to parking lot and back.

As such, it was designed to meet all the needs of a modern family on the go, starting with its interior seating configuration. The Convenience, Limited and Touring models come with seating for eight, while the top-tier Premier seats seven with a pair of second-row captain’s chairs. S econd-row captain’s chairs are also available on the Limited and Touring models as a $500 option. Understanding that happy passengers make for pleasant journeys, Subaru’s engineers have equipped the rear seats with their own air vents and climate controls, plus reading lights, window shades and USB ports. There’s also the option of a heated second row for those chilly winter mornings.

Under the hood, things are equally well thought-out. The Ascent’s engine across all models is a turbocharged four-cylinder boxer (Subaru’s configuration of choice) good for 260 horsepower and 277 lb-ft of torque. While some buyers may balk at the lack of a six-cylinder option, the motor never felt underpowered along Cape Breton’s winding, hilly roads.

Thanks to the engine’s low centre of gravity, the Ascent remains poised and firm through the corners, without the sort of body roll that afflicts other vehicles in the SUV segment. The careful engineering of the new Subaru global platform on which the Ascent is built, plus thoughtful touches such as felt pads on the window shades to prevent them rattling, contribute to a remarkably quiet ride, even at highway speeds.

In a nod to the kind of active lifestyle for which it’s designed, the Ascent also comes with off-road-ready X-Mode featuring hill descent control, which takes over the throttle and brakes on steep inclines, allowing the driver to focus on steering while it gently guides the vehicle down the hill. While few Ascents will likely be subjected to such extreme conditions, the fact that it can tackle them while hauling a cabin full of kids and gear will surely bring a whole new segment of SUV customers to Subaru’s doorstep.

While there’s nothing revolutionary about the Ascent’s exterior design, it looks fresh, modern and distinctively Subaru. For buyers who are attracted to the rugged, muscular lines of the brand’s other SUVs, it will certainly be a hot contender.

There’s nothing fancy going on here (particularly the unconvincing “wood veneer” door inserts in the Premier trim) but the interior is comfortable, with fit and finish of high quality throughout. While the second- and third-row benches are definitely designed for kid-sized frames, there’s enough leg room back there to accommodate grownups in reasonable comfort for a short haul.

The Ascent’s boxer engine offers plenty of power with two adults on board, but the four-cylinder might show some strain under a full payload of people and gear − not to mention its rated tow load of 2,270 kg.

Subaru claims the widest, longest cargo opening in its class at 1,198 mm with a maximum cargo volume of 2,435 litres (significantly more than the Pathfinder and Highlander). The Ascent also boasts thoughtful features such as tie-down loops integrated into the roof rails, interior cargo hooks and underfloor storage in rear.

Subaru is sure to win over some new fans (and their kids) with this road trip-ready SUV. 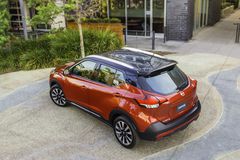 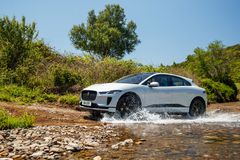 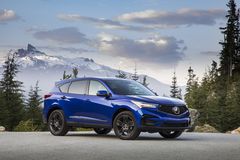