Torrential rain is pounding the Algarve, which shouldn’t happen. This part of southern Portugal is supposed to be sunny with blue skies for 360 days a year, but it has been raining for weeks.

High in the hills, fog is settling in, smothering these sinewy roads and killing any hope of making rapid progress in Aston Martin’s newest sports car.

The V-8 engine never gets a chance to roar; the traction-control light blinks a hopeless Morse code. The steering goes light for a split-second as the fat Pirellis skate over another puddle.

Emerging from the fog, the Aston looks like a shark swimming out of the murky deep.

The all-new 2019 Vantage is a direct shot at Porsche, at the venerable 911 Turbo, a machine the German company has been steadily honing for 43 years.

By contrast, the Vantage has had a different upbringing. The previous model languished in showrooms for 13 years, nearly double the normal lifespan of a vehicle, because the company didn’t have the money to develop a replacement.

Aston Martin’s dirty secret is that, for much of its 104-year history, its cars simply weren’t that good. Perhaps you’ve always lusted after one because you saw James Bond drive it or maybe because you appreciate the brand’s rich racing history, or maybe it’s just that you’re shallow and you think Aston makes beautiful cars, which it usually does.

Even its worst cars were pretty: the Lagonda, the parts-bin Virage of the late 1980s, and the 1969 V8, which received only minor updates over its 20-year lifespan. (The Toyota-based Cygnet city car, however, is irredeemable.)

“I’m aware of proper profits being made in only two of those [104] years. There were some break-even years, but no more than four,” says chief executive Andy Palmer, who joined the company in 2014. Last year, Aston Martin’s bottom-line profit was US$87-million, by far its highest. “If you add it all together, we made more money last year than in the cumulated best years.”

Not only is the company turning a profit, it’s doing so while investing heavily in research and development of new models, such as the coming DBX crossover, electric Lagonda sedan and a Ferrari 488-rivalling mid-engine car. None of this surprises Palmer. Soon after joining the company, he laid out this master plan and, piece-by-piece, it’s coming to fruition.

“The business model works, assuming of course that each car is successful,” he says.

The stakes are always high. The old Vantage was the bestselling model in the company’s history, but the design of this new one raised some eyebrows. The green paint on the launch cars signals Aston’s intent to go after younger buyers, says design boss Marek Reichman.

The Vantage is the entry point to Aston ownership; with a base price of $172,495, it will hope to attract buyers away from the Porsche 911, Audi R8 and AMG GT – the car from which the Vantage’s V-8 engine is sourced, owing to a partnership with Mercedes.

In the drizzling rain, the speedometer indicates 245 kilometres an hour on the main straight of the Portimao racetrack. Easing into the Vantage’s (optional) carbon-ceramic brakes, there’s an unnerving lack of slowing down going on as the first turn approaches.

Standing on the brake pedal, they suddenly work like driving into a tar pit. In these cold, rainy conditions, ceramic brakes struggle to get up to operating temperature.

The whole day is like this. The car is unable to operate at its best, to show off its full range of ability, but that makes it all the more impressive.

Turning into a double-apex right at more than 140 km/h, there’s a reassuring amount of feel. The car communicates clearly – through the steering wheel and seat – that it’s not about to spin off like a dreidel into the tire wall.

The steering doesn’t have the instant response of more track-focused machinery, but it won’t rearrange all your internal organs over a rough road, either.

If you’re gentle with the throttle, the rear wheels step out progressively, just enough that you can wind off some steering lock. With the traction control halfway off, allowing more slip and yaw, the car remains progressive and highly controllable at the limit, proving it’s not just clever electronics saving the day. This is a well-sorted chassis.

Even in the rain, this V-8-powered wedge is not as white-knuckle a ride as, say, the twitchier AMG GT or the outgoing Vantage would be.

A new electronically controlled differential – a first for Aston – works in concert with torque vectoring to make this car’s performance so accessible. On the track’s penultimate corner, a long off-camber right, you can use more and more throttle without fear as the diff manages the power.

In a millisecond, the differential can go from open to 1,800 pounds of locking force. Open, it allows the rear wheels to spin independently, which aids agility. Fully locked, the wheels rotate at the same speed, aiding stability. Tuning when the diff opens and locks is a dark art, perfected here by Matt Becker, formerly of Lotus Cars.

The Vantage is not without issue. It’s not as quick as the all-wheel-drive 911 Turbo from 0-100 km/h (3.6 seconds versus 3.0 for the German). The Brit is slightly down on power: 503 horsepower versus 540. The Aston weighs roughly 1,640 kilograms with all lightweight options, compared with 1,595 for the Turbo. And the Mercedes-sourced infotainment and navigation system is not that company’s latest or greatest. But numbers never tell the whole story.

Craig Jamieson, senior vehicle-engineering manager, says the goal was to make a true driver’s car. It’s worth noting that Jamieson was responsible for the old V-12 Vantage S, a flawed but riotously fun Aston.

“A true driver’s car is all about engagement, communication,” he says. Attention has been paid to the details, such as the longer shift paddles to control the ZF eight-speed automatic, getting 50/50 front/rear weight distribution, stiffening the chassis, lowering the seating position and getting the cup holders just so.

“I know they’re quite important to Americans,” he says.

And – purists may now rejoice – the Vantage will eventually be available with a three-pedal stick-shift manual. There will be other Vantage variants after that: a drop-top and likely a more track-focused model. There is room for a V-12 engine under the hood, Palmer says, should Aston choose to make such a monster again.

Pulling into the parking lot of a little restaurant in the hills above the town of Monchique, the rain is pounding harder. It’s unusual, agrees the restaurant’s owner as he tends to a sizzling pan of chorizo.

For so many years Aston Martin made charitably beautiful messes. The cars were occasionally brilliant, but only because of their peculiar flaws. But the Vantage doesn’t need to make any excuses.

The forecast is calling for more rain and thunder in the Algarve. Equally unusually, and perhaps for the first time, the forecast for Aston Martin is sunny. 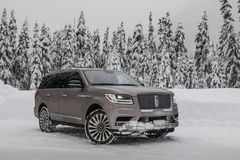