If you go to Europe this summer, you may be in for a horrible shock when you rent a car. They’re usually quite cheap, unless – oh dear – you need one with an automatic transmission. You can’t drive a stick shift? Well, in that case, the price to rent a dorky French microvan in which you’re forced to sit with your luggage on your lap has suddenly doubled.

Meanwhile, here in North America, automatic transmissions are usually the default option, with manuals, once the bargain-basement choice, now being aimed squarely at more enthusiastic drivers.

The only gearbox on Porsche’s new mid-range sports cars – the 718 Spyder and 718 Cayman GT4 – is a six-speed manual. (An automatic will be made available, but not until next year. When it arrives, don’t expect the manual to be cheaper. It will likely be the same price as the automatic, as it is on the 911 GT3.)

Across the entire Porsche lineup – which includes many SUVs and sedans – not many people want a stick shift. But the people who do really, really want one. Those GT3 and GT4 buyers are big spenders who are loyal and enthusiastic.

“We had a bet about manuals with Porsche Cars North America’s CEO,” said Frank-Steffen Walliser, vice-president in charge of the 718 and 911 sports cars at Porsche. Their bet was on what percentage of U.S. customers would choose the manual over the automatic in the GT3. “I think [the CEO] said 20 per cent. Andreas Preuninger [head of the GT3 project] said 30 per cent. They were both wrong. It was 70. It was way higher than expected.”

Canadians want manual transmissions even more than our American counterparts, it turns out. Last year, 74 per cent of GT3 buyers opted to row their own gears, according to a Porsche Canada spokesperson. So far in 2019, it’s even higher: 86 per cent opted for the manual.

“Human beings, the more senses are activated, the more you are thrilled,” Walliser said. “If you buy something you do not need, you want something emotional.” Ahhh, nothing better than the smell of burned clutch in the morning.

As for the pricing, Walliser said developing a stick shift is expensive. “The manual is a small sales volume [for Porsche overall] that, price-wise, costs out very close to the PDK [automatic]. We have to convince the supplier to keep the manual in production,” Walliser explained. The vast majority of vehicles Porsche sells – which, these days, means SUVs – are automatic.

Eventually, Walliser said he could imagine manuals becoming the more expensive gearbox option. “One reason is production costs, low sales volume, research and development costs. On the other hand, you have market demand. On an enthusiast’s car like 911 GT3 or 718 GT4, I could imagine something like that,” he said. In other words, some sports car buyers – not many, but enough – are willing to pay more for the privilege of shifting gears the old-fashioned way.

If Porsche excels at one thing, it’s figuring out what customers really want and then making them pay dearly for it.

It makes the decision to omit a manual option on the new Toyota Supra and midengine Corvette C8 – two of the most feverishly anticipated sports cars in recent memory – seem like a missed opportunity to fatten profit margins at both Toyota and Chevrolet.

On Toyota’s more affordable cars, opting for a manual gearbox will save you a couple of thousand dollars. Buyers looking for a car to simply get them from A to B will pay extra for convenience of an automatic. Buyers of the new Supra, however, don’t just want a car to get from A to B. They want something fun, engaging, exciting. They’re already paying $65,000 for a sports car; how many would pay an extra $1,500 to add a manual transmission? Toyota missed an opportunity to find out.

Like Porsche, BMW has also seen there is money to be made off diehard manual fans. Markus Flasch, the CEO of BMW’s hot-rod M Division, said manuals are here to stay.

“Not on every car, but on the cars where people ask for the manual shifter, they will have it,” Flasch said in an interview in Munich. The compact M2 coupe has a nice, slick-shifting manual and Flasch has gone on record saying the next-generation M3 sedan and M4 coupe – due to be revealed later this year – will have a manual option as well.

That’s the good news. The bad news is that the manuals could become more expensive. Currently, the manual is standard equipment, while the automatic costs nearly $4,000 extra on the M2.

“[The manual] won’t be the entry gearbox any more, because it’s a niche; it’s expensive to develop," Flasch said. “Now, the mainstream is automatic, so the manual transmission, it’s a premium thing.”

Maybe none of this should come as a surprise. Have you seen what Leica charges for a 35-millimetre film camera today? Let’s just say it’s more than the price of my first car. Vinyl records are shockingly expensive too: the new Travis Scott album, $42; a Smashing Pumpkins remaster, $70. High prices for old technology. It taps into some deep desire for simplicity, for tactile mechanical devices that require concentrated interaction, the opposite of the mindless smartphone scroll.

All of which is to say, the next time you’re on holiday in Europe and have to rent a car, try the stick shift. You’ll certainly save some money and might just learn to love it. 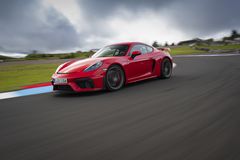 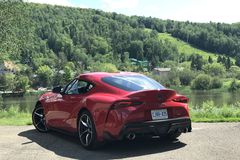