It’s even stranger than it sounds.

The reasons for the Avatar collaboration have to do with environmentalism and the trippy idea that we’re all, like, part of one big connected universe, man.

The Vision AVTR, which was unveiled in Las Vegas ahead of the 2020 Consumer Electronics Show (CES), is not going to appear in the coming Avatar sequels. The concept car is simply inspired by Cameron’s vision of a world where people live in harmony with nature.

“It’s all about creating a sustainable, desirable future where we combine together mankind, nature and technology,” says Markus Schafer, a member of the Mercedes-Benz board of management for research and development.

As the automotive industry struggles to figure out how and where it will fit into a sustainable future, Mercedes plans to use Avatar and this Vision AVTR concept as inspiration for future eco-friendly production vehicles. The concept car is (theoretically) powered by organic batteries and controlled in part through a biometric connection with the driver – just like in Avatar, in which the alien Na’vi people mind-meld with their flying dragons.

A round button rises up from the car’s yonic centre console. Put your hand on it and the button pulses as the car turns on. Mercedes says the car can recognize the driver’s breathing. The experience borders on uncomfortably organic.

“Would you say it’s just pie in the sky? Yes, but we need inspiration. We need to take this brand to the next level,” Schafer explains. Not merely content to make the best cars, Mercedes says its mission is to become “the most-loved luxury brand.”

Most people will remember Avatar as the first time they saw a shot-in-3-D movie, which means for many it will also be the first time they had motion sickness in a theatre. Others will remember Avatar as a romantic sci-fi romp through an alien world reminiscent of a 1990s rave scene, complete with blue body paint and dreadlocks. It’s a visually spectacular – if clunky – parable about the impending climate crisis, an issue near to Cameron’s heart.

“My main thing in life right now is sustainability,” he said at the concept car’s unveiling. “How are we going to do this? What’s our future going to look like?” Cameron said he found Mercedes’ commitment to sustainability to be heartfelt.

Last year, the German car company announced it aims to have an entirely carbon-neutral passenger car fleet on sale by 2039. That may seem like a long way off – and it is, in terms of the urgency of the climate crisis – but as far as the auto industry is concerned, 2039 is less than three generations of new cars away.

The Vision AVTR gives clues as to what those cars will look like in 20 years. It’s packed with new technologies, some of which are available today and others – such as the compostable, metal-free organic batteries – that still require decades more research before they reach showrooms.

The AVTR’s wheels are spherical, inspired by jellyfish-like floating creatures from Avatar, according to the concept’s designers. These wheels allow the car to move sideways, like a crab, sliding into tight parking spaces.

In the cabin, there’s the projector-based interface that, when the driver holds up a hand, shines buttons onto the driver’s skin. To select an item, just make a fist.

The floor of the car is finished with a rattan-based material called Karuun that looks like white wood. The Dinamica fabric on the seats, partly recycled and totally vegan, is already available in some Mercedes models.

Ola Kallenius, chairman of the Mercedes board of management, has obvious reasons to believe that a successful, sustainable car company is possible. He says the company can hit its 2039 carbon-neutral goal by decoupling sales growth from resource consumption. That means not just making electric cars with new, eco-friendly types of batteries, but also reducing waste, reusing materials and recycling in every phase of vehicle production.

The auto industry faces a long road to sustainability. Individual vehicles are becoming more fuel efficient, but automakers are selling more of them, which – combined with the trend toward less-fuel-efficient SUVs – means overall greenhouse gas emissions from passenger vehicles are still rising in Canada.

“Some people might say, ‘here’s the easy fix, stop people moving from A to B, stop making cars altogether.’ But let’s face it, let’s get real, global demand for individual mobility is set to grow,” Kallenius says. In 2019, Mercedes recorded its ninth consecutive year of record-breaking sales. “Fewer cars are not the solution; better cars are.”

Would the aliens of Avatar agree?

When kids see supercars for the first time, they never forget
March 19, 2019 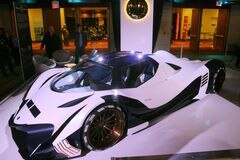 Mercedes-Benz aims to balance ‘emotion and intelligence’ in its striking designs
July 18, 2018 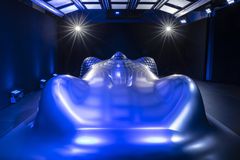