What’s the future of transportation and mobility? Here’s a glimpse of what to expect down the road – all spotlighted at this year’s virtually hosted Consumer Electronics Show (CES).

Expect to see more autonomous and electric people-movers or robotaxis, like this concept from Cadillac’s “Halo” portfolio. While this self-driving vehicle resembles a giant toaster on wheels, the boxy, open space includes a huge glass roof, a wrap-around light-coloured sofa and two captains’ chairs that make it look like a luxurious living room. Designed for a group of family or friends to travel together to a destination, it’s filled with innovative technology. Biometric sensors, for example, can monitor a passengers’ vital signs so the vehicle can automatically adjust the temperature, humidity, lighting and even the aroma inside the car. Buttons and dials are noticeably absent – replaced by voice recognition and hand-gesture controls. No word yet, on when or if this concept will ever make it into production.

EVs get a boost from Mother Nature

Electric vehicles get a boost from the sun with the Sion, the first solar-powered electric vehicle that’s affordable and built for the masses, says Sono Motors chief executive officer Laurin Hahn. This electric Sion has a range of up to 255 kilometres. Add another 35 km a day thanks to 248 solar cells covering its entire body. The solar panels convert sunlight into energy and then stores it in the battery. Essentially, you can charge the car for free in daylight hours. Charging takes less time, too – up to four times faster than a regular EV, officials say. To save money, Sion’s unique business model lets you share your vehicle, car pool or share electricity via the Sion app and a smartphone. The vehicle costs US$26,400. So far, more than 12,600 Sions have been preordered in Europe.

In the future, electric power gets a high-performance boost and added style – at least, that’s the case with the Audi RS e-tron GT (short for Gran Turismo) prototype. This powerful four-door, four-passenger zero-emissions sports sedan is mean and green, borrowing technology from its motorsports division. Formula E race car driver Lucas Di Grassi took it for a spin to showcase its agility, power, and might. This car will have a 94 kilowatt battery, a two-motor system with one electric motor on either axle, 4-wheel drive and 4-wheel steering. It’ll produce 637 hp and go 0-100 km/h in only 3.5 seconds. It’ll also have an electric range of 402 km. Plus, the interior is vegan – a first in an Audi. Instead of leather, recycled fabric covers the seats, while the carpets are made of recycled nylon.

Connectivity and artificial intelligence, or AI, will play a major role in interiors moving forward. The Mercedes-Benz User Experience, or MBUX, Hyperscreen debuts in the all-electric EQS later next year. The MBUX Hyperscreen spans 56-inches across the entire dashboard. It’s a high-tech marvel that displays information including apps, the navigation, the climate control and entertainment features. In some markets, the front seat passenger can watch TV or videos, all shielded from the driver’s field of vision. The personal assistant grows more advanced, too, with “Mercedes Travel Knowledge” system. It gathers data on landmarks and provides tidbits of info by simply asking, in the demo for example, “Hey Mercedes, what can you tell me about this building?” Before it describes the Stratosphere Tower as one of the famous landmarks in Las Vegas.

Remember Sony’s battery electric concept car called the Vision-S? One of the unexpected highlights at last year’s CES, it’s still going strong. In fact, Sony has been conducting real-world tests on the car’s numerous high-tech safety and security features. Since December, 2020, Sony has been testing the Vision-S on public roads in Austria – home of Magna Steyr, one of Sony’s partners on the venture. The stunning footage of the Vision-S in the mountainous Austrian region was captured by another new tech gadget that debuted at CES this year – Sony’s Airpeak drone. Designed to take professional aerial photos and video, the drone is fitted with Sony’s Alpha 7S III camera – a dream for budding filmmakers and photographers.

No CES is complete without a preview of a flying car. This one, from GM’s Cadillac division, came as a big surprise. While details are sketchy, the electric vertical take-off and landing vehicle, or eVTOL, looks like a one-person drone that’s intended for quick, short city trips. This autonomous vehicle will have four rotors, be powered by a 90-kWh motor and fly at speeds of up to 90 km, say officials. While this is Cadillac’s first foray into aerial mobility, it’s still too soon to say if this concept will ever get off the ground. 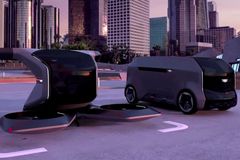 If I’m a senior driver in Ontario, can I drive with an expired licence right now?
January 10, 2021 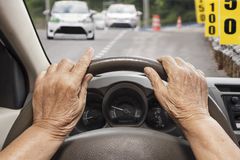