Last week, at a posh event in Hollywood, Cadillac took the wraps off the 2021 Escalade, the company’s full-sized, three-row SUV. It was the last unveil of General Motors’ all-new lineup of large SUVs: the Chevrolet Tahoe and Suburban (unveiled in December), GMC Yukon (January) and, now, the Escalade.

Underneath their completely redesigned bodies, they’re all mechanically the same, but what makes them different comes down to luxury and features – and, of course, price. So which one is right for you?

First off, the similarities: For the first time, GM’s SUVs were designed with an independent rear suspension and available air springs and magnetic dampers, all of which should make the ride and handling better overall, while freeing up interior space. The Escalade, for example, benefits with rear-seat legroom increasing 40 per cent to 34.9 inches on the standard length model, and cargo room behind the third row increases by 68 per cent.

Powertrains are nearly identical, too; the Chevy and GMC start with a base 5.3-litre V-8, with 355 horsepower and 383 lb-ft of torque, and the option for a 6.2-litre V-8 with 420hp and 460 lb-ft of torque. For the first time, there’s also an option for a Duramax 3.0L diesel engine, with 277hp and 460lb-ft of torque. The Escalade only offers the 6.2 litre or the diesel, and all engines are mated to a 10-speed automatic transmission.

The Suburban and Tahoe are lowest on the rung here in terms of price and luxury, but they offer good size, power and features, with a new exterior style that reflects the Silverado pickup. A 10-inch touch screen is standard with options for a digital gauge cluster and two touch screens behind the rear seats. Over all, they are much better vehicles than the previous generations, and would fit the needs of people looking to haul a lot of people and a heavy trailer, with either the longer Suburban or slightly shorter Tahoe.

GMC is more of a premium brand, and its Yukon reflects that upmarket feel with a more luxurious interior. However, it’s the top-level Denali version that really exudes the opulence, with a choice of four different interior colour schemes and open-pore wood trim. It also offers features such as automatic emergency braking, a nine-camera, 360-degree view, rear pedestrian alert and a camera rear-view mirror. There’s a more macho exterior, with a gaping grille and LED lighting. With such a marked step up over the Chevrolets, the Yukon Denali should fill the needs of those looking for a big vehicle with more luxury and features.

But the Escalade has always been on a higher plane, and with the Yukon offering so much opulence, Cadillac had to do something different. Besides the expected full leather interiors with fine wood and shiny metal trims, it’s moved the game by introducing innovative new technology, a move you’d expect from the likes of Mercedes and BMW. And indeed, the new GLB and X7, respectively, as well as the Lincoln Navigator are right in the sights of the Escalade.

Most striking is right in front of the driver, with a huge 38-inch curved organic light emitting diode (OLED) screen engulfing most of the dashboard. Its actually divided into a small 7.2-inch touch screen on the left, a 14.2-inch centre “cluster” screen for gauges and info and a 16.9-inch infotainment touch screen on the right. OLED is used for darker blacks (it’s not backlit) and higher contrast so it can be easier seen in sunlight.

That centre cluster screen also houses a unique feature. On top of a full navigation mode, four different gauge arrangements and night vision, it also has an augmented reality navigation that uses a front-mounted camera and projects navigation graphics and info right on the road ahead inside the screen.

Also new for the Escalade is an updated version of Super Cruise autonomous driving feature. Taken from the soon to be defunct CT6, this version now has automatic lane changing with a click of the turn signal.

It also offers two exclusive sound systems designed by AKG. The standard version is a 19-speaker setup, but optional on the Premium Luxury and Sport editions is a 36-speaker orchestra that allows the driver and front passenger to each set different volumes. Both systems use alternate frequencies to counter road noise and keep the cabin quieter.

With an exterior more subtle and refined than its GM stablemates, and with all these new features and tech, Cadillac has positioned the Escalade in a very competitive position. For those who are looking for a giant SUV with cargo and pulling capabilities, the Escalade is the obvious choice; it’s not just the best of the GM SUVs, it’s also on par with or better than anything on the market in its class.

What should be the desired gear ratio of my pickup truck to carry a slide-in camper? Subscriber content
January 29, 2020 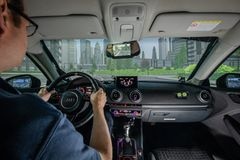