A new concept designed to recruit hard-to-reach populations to the skilled trades is gaining traction as more Canadian colleges take their courses on the road.

Red River College, whose main campus is in Winnipeg, uses two mobile trades training centres to serve remote Indigenous and rural communities in Northern Manitoba. Sudbury-based Cambrian College has criss-crossed Northern Ontario with its rig. And at Coast Mountain College in Terrace, B.C., acting president Justin Kohlman says the mobile training unit “is critical to ensuring that education is accessible and reaches people where they live.”

The federal government recently granted $1.3-million to Coast Mountain College to expand its programming in Northern British Columbia, noting that, “as many of the [college's] students are women, youth or Indigenous peoples, the mobile classroom lowers the barrier to receiving trades training and helps build a more inclusive work force in sectors such as liquefied natural gas, mining, construction and oil and gas.”

In Hamilton, Ont., the barriers to postsecondary education are not so much geographic as socio-economic, said Jim Vanderveken, dean of the centre for community partnerships and experiential learning at Mohawk College.

“We have a number of neighbourhoods where the level of poverty is significant, the levels of unemployment are higher [than average] and the levels of high school completion are lower,” says Vanderveken. “We recognized that if they are not going to come to us, we had to go to them.”

Mohawk purchased its first trailer in 2017, stocked it with state-of-the-art equipment and drove it downtown in the hopes of giving residents of the city’s most underserved communities a taste of the trades, tuition-free. Those who enrol and complete a three-month course receive an academic credit. From there, they can formally enrol in the college or use the skills they have learned to find employment.

Vanderveken says 750 people have gone through the pre-apprenticeship trades program to date and the federal government, which provided $4-million for Mohawk's first classroom on wheels, contributed another $4-million in April for a second mobile centre.

Troy Hillebrandt, an unemployed father of two young children, had seen the trailer while driving around Hamilton. When it relocated to nearby Caledonia – just a five-minute walk from his front door – he figured he had nothing to lose and signed up for a three-month advanced manufacturing course. In addition to learning the latest manufacturing production techniques, Hillebrandt, whose background is in customer service and transportation, learned how to weld, he is qualified in first aid, “and I have a three-tiered forklift ticket, which is something I never had.”

The cost of leaving remote Northern communities to attend bricks-and-mortar campuses can be prohibitive for many students. “This way, students continue to have support from family and friends and, if they are in a First Nations community, from band members and elders,” Bouvier says.

This fall, Coast Mountain College will take its teal training trailer – affectionately known as Optimus Prime because of its transformative properties – to Prince Rupert, B.C., to run a six-month gas process operations course for prospective employees of Calgary-based Pembina Pipeline Corp. This follows a successful first project, developed in conjunction with Coast Tsimshian First Nations communities and Calgary-based AltaGas Ltd., where all 11 graduates were hired to work at the company's Ridley Island propane export terminal in Prince Rupert. 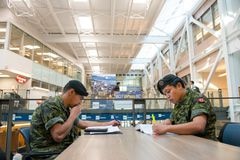