Born out of the terrible ashes of the Holocaust and attendant Second World War atrocities, the United Nations' Universal Declaration of Human Rights (UDHR) stands as the guiding text in the drive toward a more just and equitable world. Adopted by the UN in 1948, since translated into 524 languages, it became the springboard for a global rights revolution, inspiring domestic constitutions – including the Canadian Charter of Rights and Freedoms – and spawning a host of specific treaties and conventions that have seen the rights of women, children, minorities, the disabled and, most recently, Indigenous peoples enshrined in international law.

Canada is justly proud that it was a Canadian – New Brunswick-born legal scholar John Peters Humphrey – who penned the first draft of the declaration. More problematic, however, is our country’s own official position on human rights in the era in which it was written.

Drafted by a 10-member international committee including Humphrey and chaired by former U.S. first lady Eleanor Roosevelt, the UDHR was presented to the UN for approval on Dec. 6, 1948. Canada, shockingly, abstained – a vote tantamount to a rejection, making it an outlier among the UN’s western nations and putting it in the unsavoury company of such nay-sayers as the Soviet bloc and apartheid-era South Africa.

“It caused quite a stir amongst Canada’s allies,” says Jennifer Tunnicliffe, a Ryerson University history professor and author of Resisting Rights: Canada and the International Bill of Rights, 1947-76. “The United States and Britain were strong supporters of the declaration.” No less outraged was Humphrey himself, an official of the UN secretariat who had no inkling of his government’s position. “In his diary he talked about how shocked he was at Canada’s response,” Tunnicliffe says.

Canada eventually caved under allied pressure and supported the UDHR when it came up for a final vote before the General Assembly on Dec. 10. But there was skepticism among Canadian politicians at the time about the value of a human rights declaration – and trepidation, too. In his diaries, Canada’s wartime prime minister, William Lyon Mackenzie King, also bridled against it, presciently seeing how its signatories may then be held accountable for their own abuses.

“He was sincerely worried that his own citizens would use the declaration to criticize him and his government,” says University of Alberta sociology professor Dominique Clément, author of Human Rights in Canada: A History. “That, ironically, is exactly what ended up happening.” (Among other egregious measures, King’s government was guilty of interning Japanese Canadians during the war, for which Ottawa would make reparations more than 40 years later.)

In the ensuing decades, Canada would do a startling about-face and come to be seen as a human rights champion on the world stage – although its performance has continued to swing between the exemplary and the less-than-stellar.

By the 1970s, awareness of human rights was at a height, with the emergence of the women’s liberation, Black power and other social movements, and grassroots advocacy groups such as Amnesty International making an impact at the UN. Canada’s own thriving rights activism led the federal government to embrace the UN treaties. Canada had already played a key role in getting the 1965 convention against racial discrimination adopted and would go on to be a prime mover in the conventions condemning discrimination against women and establishing the rights of the child, as well as pushing for the enforcement of international human rights law.

In the wake of the atrocities committed in Rwanda and the former Yugoslavia in the 1990s, Canada brokered the treaty that created the International Criminal Court to prosecute war crimes, with Canadian lawyer Philippe Kirsch serving as its first president.

“We’ve had our moments as strong human rights advocates,” Tunnicliffe notes, “although our record since then is very imperfect.” Most shamefully, Canada initially resisted the efforts toward the United Nations Declaration on the Rights of Indigenous Peoples and voted against it – along with fellow settler states Australia, New Zealand and the United States – in 2007. Again, bowing to pressure, Canada ultimately endorsed the declaration and the federal government has promised to introduce it into Canadian law by the end of this year.

Today, awareness of human rights is greater than ever, while its meaning has expanded enormously since the postwar era. The UDHR of 1948 lists just under 50 rights and freedoms. “Current international law recognizes over 300,” Prof. Clément says. “That’s an incredible change.” He argues that the concept of human rights itself, despite some historical precedents – Eleanor Roosevelt famously likened the UDHR to a universal Magna Carta – is a 20th-century phenomenon. “In fact, it’s really a post-1970s idea,” he claims. Fifty years ago, for example, a healthy environment was never thought of as a human right. Now, he says, “it’s recognized as that in some 112 countries.”

In Canada, human rights awareness has led to a slow reckoning over the country’s own abuses. The classic Canadian smugness prompted by comparisons with the United States has given way to anger at homegrown injustices and a recognition of the systemic racism within our institutions. This summer’s solidarity with the Black Lives Matter protests and demands for policing reforms show a country aware of its own shortcomings. Tunnicliffe says it makes her optimistic. “Young people now are much more willing to be critical and think differently about Canada in ways that hopefully will make a change.”

The UDHR, meanwhile, has become the fundamental document that Humphrey and his co-authors dreamed of. Alex Neve, the outgoing secretary-general of Amnesty International Canada, says that in his decades doing frontline work in war-torn countries, he has constantly come across copies of the declaration hanging in people’s homes and the offices of local activist organizations. “It’s held on high by people all over the world,” he says. “That may be its greatest value, that it has become this vision and rallying cry that fuels the courage and resilience of human rights movements and activists everywhere. And will continue to do so, until we’ve realized what it promises.”

Bob Rae on his new job, human rights and the challenges ahead
October 23, 2020 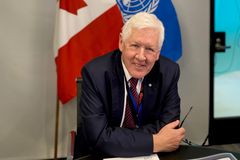 Protecting people and the planet against abuse
October 23, 2020
Follow us on Twitter @globeandmail Opens in a new window
Report an error Editorial code of conduct
Due to technical reasons, we have temporarily removed commenting from our articles. We hope to have this fixed soon. Thank you for your patience. If you are looking to give feedback on our new site, please send it along to feedback@globeandmail.com. If you want to write a letter to the editor, please forward to letters@globeandmail.com.
Comments are closed