In modern parenting circles, helicopter, lawn mower or attachment parenting has been canonized as the best way to raise children. There are countless books, television shows and movies that idolize the hyper-involved parenting style such as Helicopter Mom starring Canada’s own Nia Vardalos. In one scene, Vardalos hovers over her onscreen son while he’s doing homework – first by bringing him water, then dusting around him, and finally eating chips while leaning on the doorway.

“Some of [the] parents I know tend to be much more on their kids and micromanage every little thing and interaction,” says Sarah Coderre, 33, a Calgary-based mom of a two-year old and four-month old. “And then, others are the opposite – maybe too laid back. And, I think I'm usually somewhere in the middle.”

A new study out of Lehigh University in Bethlehem, Penn., counters the drive to respond to each whim and supports Coderre’s middle of the road approach. After observing 83 low socioeconomic-status mothers and their infants to assess attachment, the conclusion is ‘good enough’ parenting is much closer to ‘perfect’ parenting.

“The traditional measure of parental caregiving, which is called sensitivity, did not significantly predict the attachment outcomes,” says lead researcher Dr. Susan S. Woodhouse. According to the study’s findings, as long as a parent responds to a baby’s cries 50 per cent of the time, the child will still feel attachment to the parent.

“It turns out that babies are pretty forgiving, and that there's a lot that you can get wrong and still have a secure baby,” Dr. Woodhouse says. While 50 per cent is the bare minimum when it comes to response time to babies, parents can find comfort that they don’t have to respond 100 per cent of the time to be a perfect caregiver. About the study, Coderre says, “I feel completely relieved.”

“I think this study allows parents to trust their kids a little bit, or to give them that opportunity to explore and test boundaries – to try things out on their own,” says Toronto-based child development and parenting expert Caron Irwin, who notes that there hasn’t been a study like this before. “I think when parents step back and they see their kids be successful, that gives the parents the confidence to encourage them to [take calculated risks] as they grow older.”

To all parents and caregivers, Irwin recommends trusting internal instincts. “I think that's something that we need to celebrate, we need to honour and we need to recognize that all parents have,” she says. “It's something that could develop confidence in families that might have other factors up against them,” such as low-socioeconomic parents, who have more external stressors than middle class families.

For example, Irwin suggests babies and young children have a routine so parents can respond accordingly to their cues. If babies have the same sleep and feeding schedule each day, parents will begin to recognize when their baby is getting hungry or sleepy (and feel liberated to nix the guilt if they occasionally don’t), or look at different ways to nurture a bond like playing eye spy while driving in the car or out for a walk. Keeping kids as part of the conversation while doing everyday tasks can help parents foster a close relationship without a need to hover and fuss.

With both boys and a girl, royal parents join others in deciding how to raise their different gender children
July 20, 2018 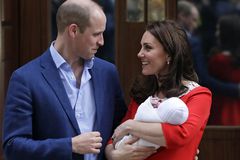