This year’s Remembrance Day follows on the heels of the 75th anniversary of the end of the Second World War, but few if any of that war’s 30,000 surviving Canadian veterans will be participating in the ceremonies in person. Due to the COVID-19 pandemic and, especially, its heightened risk to the elderly, Royal Canadian Legion branches across the country have severely scaled back their public commemorations. The live-broadcast ceremony at the National War Memorial in Ottawa will still be going ahead, but in a bare-bones format and without its traditional parade of veterans.

But even if those veterans won’t be visible, they won’t be forgotten. These are the soldiers who battled the frightening tide of fascism that threatened to engulf the world 80 years ago. Today, with neo-Nazis and white supremacists rallying in North America and far-right nationalist parties winning votes in Europe, it seems more important than ever to remember that.

“It was a war against evil and it had to be fought,” the eminent military and political historian J.L. Granatstein says. “Fortunately, we won – it was a damn near-run thing for most of it.”

Almost 1.1 million Canadians – out of a then-population of less than 12 million – served in the Allied fight against the Axis forces of Nazi Germany, Fascist Italy and Imperial Japan. Of those, 45,000 died – less than the 66,000 lost in the First World War, but only because Canadians were in action for a shorter stretch of time.

Yet, momentous as it was, the Second World War has often taken a backseat in the Canadian collective memory to that earlier conflict. It may be due in part to Remembrance Day itself, which grew out of the First World War and is observed on Nov. 11 – the date in 1918 when the armistice was signed to end hostilities between Germany and the Allied powers. It was even known as Armistice Day from 1919 until 1931, when Parliament redubbed it Remembrance Day. But despite the name-change it has retained the trappings of the First World War – the poppies, the poems (In Flanders Fields and the Ode of Remembrance), the cenotaphs erected across the country in its aftermath.

At the end of the Second World War, its fallen were simply added to the existing memorials. “Most communities recognized that they didn’t need another statue or cenotaph and putting up an extra plaque or two was sufficient,” says Jonathan F. Vance, history chair at the University of Western Ontario and a specialist on war, memory and popular culture.

Where the Americans and British revisited the Second World War ceaselessly in historical works and popular entertainment, Canadian authors and artists preferred to fixate on its predecessor as the war that arguably defined the Canadian identity. This, despite the fact that the First World War is generally looked upon as an imperial folly that decimated a generation, and its Canadian soldiers were, in Mr. Granatstein’s words, “colonial chore boys doing our duty for the [British] Empire.”

While the Second World War needs no justification, its legacy for Canada was more down to earth – the introduction of the social-welfare state, as proposed in the 1943 federal “Report on Social Security for Canada” by social scientist Leonard Marsh. “The Marsh Report is the great unrecognized memorial of the Second World War,” Mr. Vance says. It anticipated many of the social benefits, from employment insurance to universal health care, that Canadians enjoy today. “Of course, that’s not sexy, that’s not exciting,” he says, “but it’s big.”

Canadians' appreciation of their country’s role in the Second World War began to grow in the 1990s, with the 50th anniversaries of the D-Day invasion and the liberation of The Netherlands by Canadian troops – both heavily covered by Canadian media. The attention also gave a new lease on life to Remembrance Day, whose popularity had been dwindling since the time of the 1960s anti-war movement, when it came to be associated with militarism.

The beginning of the 21st century and the deaths of the last First World War veterans gave Canadians reasons to reconsider Remembrance Day. The repatriation and reburial of Canada’s Unknown Soldier at the National War Memorial in 2000 and the 2005 opening of the new Canadian War Museum building in Ottawa were similar boosts. Mr. Granatstein particularly recalls the moment when people attending the Unknown Soldier’s service spontaneously placed poppies on the granite tomb. “That was a wonderous impromptu gesture that spoke to something very real,” he says.

Other spontaneous displays of respect occurred in the early 2000s after Canada entered the war in Afghanistan – the country’s biggest military engagement since the Korean War in the 1950s. When convoys carrying the repatriated bodies of slain soldiers travelled down Ontario’s Highway 401 from CFB Trenton to the coroner’s office in Toronto, crowds gathered on the overpasses to salute them. As a result, in 2007 that stretch of road was officially renamed the Highway of Heroes.

Remembrance Day is also a time to remember Canada’s peacekeeping soldiers and others who have died while serving in the Canadian military at home or abroad. “Each individual who stands at a cenotaph can have in mind people from dozens of different conflicts around the world,” Mr. Vance says.

Although the pandemic is making public ceremonies challenging this year, 2019′s national ceremony in Ottawa had an estimated attendance of more than 30,000. It appears the tradition is as strong as ever. “There was a time when I might have been concerned about the future of Remembrance Day as veterans died out, but that time has long passed,” Mr. Vance says. “I think Canadians have shown that they are deeply interested in the observance, and the history behind it, and they want to preserve it.”

Mr. Granatstein hopes that this Remembrance Day we’ll think especially of those Canadian Second World War veterans – 50,000 of them women – who, in his words, “volunteered to serve to defeat evil. That’s a noble gesture,” he says.

The National Remembrance Day Ceremony in Ottawa will be broadcast live on television and on the Royal Canadian Legion’s Facebook page on Nov. 11 at 10:45 a.m.

On the front line: Remembering the contributions of Indigenous veterans
November 11, 2020 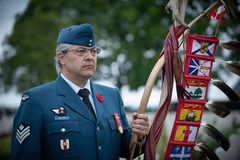 Canadians helped watch the seas and the skies
November 11, 2020 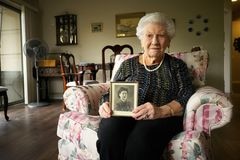