It was early June when fury over the police killings of George Floyd and Breonna Taylor in the United States and Chantel Moore in Canada unleashed a wave of vigils and demonstrations in cities across North America.

In Halifax – a city with the oldest Black population in Canada – hundreds gathered in a downtown square for a Black Lives Matter protest on June 5.

Meredith Wilson, a teacher from Sacred Heart School of Halifax, an independent school, was there and as she listened to the powerful words of local Black youth activist Kate MacDonald, something changed in her. She then marched with the group to continue the vigil on the steps of the Halifax Regional Police Headquarters.

“[MacDonald] said ‘White people can come out here and chant our slogans, take pictures for your Facebook page, but you don’t get to go home and sit on your sofa after this is done,’” Ms. Wilson says. “That really spoke to me. I was like ‘Oh my gosh, I really need to use my privilege to do something.’”

Since that day, Ms. Wilson began working on building a more anti-racist community at Sacred Heart School of Halifax – part of the societal movement happening across the country and in many schools as people are becoming increasingly more aware of systemic racism after the killings of Mr. Floyd, Ms. Taylor and Ms. Moore.

Ms. Wilson spearheaded a new anti-racism committee at school, meeting over Zoom throughout the summer to create a new anti-racist policy, a reading and resource list for teachers, a new victim-centred approach to resolving racial conflict, and updated its dress code to allow for more culturally specific clothing such as durags. The committee also decided on an anti-racist theme for the 2020-21 school year: building an anti-racist culture through diversity, equity and inclusion.

“We’re looking at our own internal biases and doing work around that,” says Ms. Wilson, who teaches English as an additional language for grades 3 through 12. “We all have them. It’s uncomfortable … but it’s just part of what has to be done.”

Discussion about racism and world events has also had an impact at Meadowridge School, a not-for-profit independent school in Maple Ridge, B.C. Grade 11 and 12 business and management teacher Dan Tao initiated a Zoom discussion about diversity this past spring after seeing hatred against Asian Canadians and Americans related to the novel coronavirus pandemic. Students talked about incidents in the community, such as the racist graffiti scrawled on the side of Vancouver’s Chinese Cultural Centre and how to handle and de-escalate racism.

After the killing of Mr. Floyd, Grade 12 student Oliver Gao, who joined the Zoom discussion, realized a regular social justice club was needed so students could discuss Black Lives Matter and how to create a more anti-racist society. “Over the years, the general trend has been to not talk about [racism] and hope that it goes away but through our lawen groups we’ve realized that that’s the opposite of what we should be doing,” he says. “By not doing that we’re not letting vulnerable voices speak up.”

In light of systemic racism in the news and police killings of Black and Indigenous people, some schools have also already made changes to the curriculum.

At Halifax Grammar School, an independent day school, teachers have gone through implicit bias training with a social justice professor from Saint Mary’s University in Halifax and changed the curriculum to meet the needs of students in these changing times, says Teresa Woodford, the head of the middle school.

“We know they’re going to have questions and we know that it’s difficult for them to understand all the issues Black Lives Matter and reconciliation are bringing forward,” she says.

Over the summer, Halifax Grammar School provided students a reading list with titles by Black and Indigenous authors and is incorporating more books by authors of colour into the curriculum, including the novel Annaka by Black Nova Scotian author Andre Fenton in Grade 8.

Grade 6 history and social studies classes are also now more inclusive, focused equally on Mi’kmaq and African Nova Scotian history along with traditional settler perspectives. “We’re not waiting for someone else to make policy for us,” Ms. Woodford says. “We do have the freedom to recognize what is going on in the world and make changes.”

Back at the Sacred Heart School of Halifax, the head boy and head girl made a speech to students on the first day of school, to set the tone for a year focused on anti-racism and social justice.

Jaden Lawen spoke about trying to help others during bleak times and told students about the fundraiser he set up for the Red Cross after the deadly explosion in Beirut this summer. “I was shocked and I didn’t know what to do and so I tried to make the best of it by raising money for those affected,” says Jaden, who usually spends his summers in Lebanon, the home country of his grandparents, if not for the pandemic. His fundraiser To Beirut with Love has raised more than $90,000 for the Red Cross.

Head girl, Amelia Wallworth, spoke about how the pandemic and the death of Mr. Floyd has brought forth a year of change. The first step, she says, is education, and so she is working with teachers and the student council to look at ways to introduce discussions about racism and inequalities into the classroom.

Editor’s note: Clarifies sequence of events at the demonstration and changes to a more culturally appropriate spelling of durag. 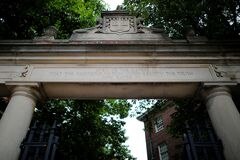 How smaller schools set the stage for innovation
September 25, 2020 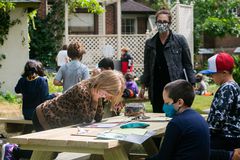 More parents choosing private school for their kids amid the pandemic
September 25, 2020