Education has reached a new level of post-modernism: A venerable textbook company is effectively writing the textbook on doing away with textbooks.

The push for Nelson to reinvent itself comes from different corners: education policy makers want to prime students for the digital world; schools and school boards, however, have desperately limited funds to spend on educational materials; and all publishers are facing pressures to go digital to stay afloat in a troubled industry.

So, the company is putting even greater weight on its digital offerings with a new online platform, allowing textbooks published by the company and others to be accessed through a cloud-based system called Edwin.

Digitized textbooks have, of course, been around for years, but this platform lets students search a larger collection of digitized books than they likely would have access to, Mr. Brown said, and perhaps more significantly, the contents of the books are broken into searchable modules, or “learning objects" as the company calls them. “A standard textbook might get broken down into between five and [hundreds of] different learning objects,” Mr. Brown said.

The idea is to give students a kind of circuitous learning journey, he added. Students can delve into a subject and explore its many tangents, sampling information from multiple sources, following one’s own wandering path, similar to how we all experience researching something online. Yet, in this case, students remain within a protected digital habitat, rather than the questionable frontiers of Google. Only books by Nelson and other vetted academic publishers are accessible, Mr. Brown said. “They’ve got to be educational based. They’ve got to be vetted and approved, and they’ve got to be tied to curriculum."

The system also allows students to do school work on the platform, and that work remains accessible whenever they log into the system. 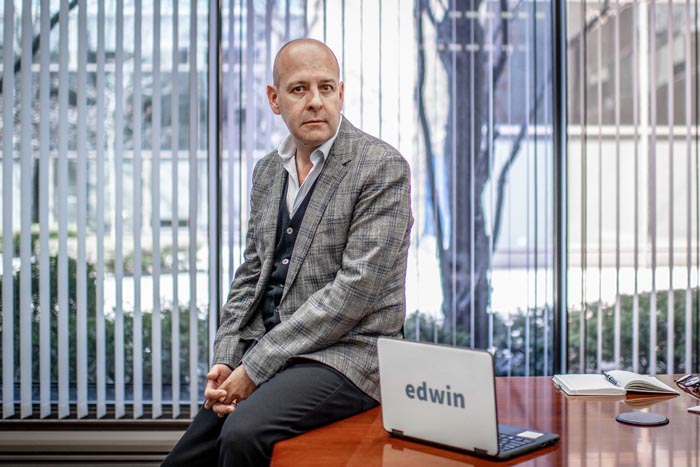 Disruption may seem like déjà-vu for Steve Brown, having seen full-scale industry disruption firsthand, as chief executive officer of Cinram, the CD and DVD manufacturer, before coming to Nelson. Here’s what he says about living with disruption.

Pattern of acquisitions: “We went through an acquisition trail [at Cinram], when we were buying additional businesses. We also went through a physical-to-digital transformation. Ultimately, we sold the business, and we broke that up into individual pieces. And those businesses are now running under other ownership throughout the world.”

Coming to Nelson: “I think my experience in terms of bringing innovation into a business which had been in a physical format for decades was one that was sought after, to be able to reinvent ourselves.”

Staying true to Nelson’s core business: “Nelson has been a great company for a long time, but like most publishing businesses, they’ve gone through a decade of continual shrinkage. And I’m a great believer that disruption often [leads to] future growth."

Mr. Brown stressed, though, that Nelson isn’t abandoning its business as a publisher of educational material. The content Nelson publishes is agnostic to the medium, whether print or digital. The company is just making it more accessible, he said.

“We have replaced the binding and the paper with delivering it on technology. We’ve moved away from what would be the standard table of contents at the front of the textbook to a search engine. The way that we relay content to each other through metadata tagging and curriculum alignment is far more 21st century," he said. But the core business of publishing educational material "will be the same.”

After new owners acquired Nelson in 2015, Mr. Brown was brought on board two and a half years ago, ushering in a series of acquisitions and partnerships, many of them digitally focused, such as a distribution partnership with American education resource giant Houghton Mifflin Harcourt, partly to expand its catalogue of material on Edwin, Nelson said at the time. In 2017, it acquired McGraw-Hill Ryerson’s kindergarten through Grade 12 educational materials, with McGraw-Hill focusing more on the higher education market, McGraw-Hill said.

“Most distruptors come from outside the industry. We decided to disrupt ourselves,” Mr. Brown said, adding that becoming an “ed-tech” company, as he sees it, “was really betting the farm for us.”

Mr. Brown has seen serious, industry-flipping disruption before, as the former chief executive of Cinram. For eight years, he went from taking that Canadian manufacturer of CDs and DVDs through periods of growth and acquisitions, to seeing the company hurtle toward a world of streaming music and Netflix, resulting in Cinram’s various operations being split apart and sold off. The strategy now at Nelson is to change the company before the company is forced to change.

Nelson’s customers for Edwin are school boards, which pay an annual fee and choose to rent the clamshell devices or not, although renting devices is not Nelson’s goal. It’s the academic content that Nelson is selling, Mr. Brown said.

“[We make] zero profitability on the device. Zero. We are more than happy for the school boards to get their own devices, as long as they are one-to-one, student-to-device ratio, and that they [the students] get to take them home with them, because that allows students to access learning when they want, not just during school hours,” he said.

Regardless of the interest Mr. Brown says that Edwin is getting from educators, Nelson is introducing the platform into a chaotic world of severe educational cutbacks and unequal access to computers in crowded classrooms and lower-income schools.

As Marlena Rivett, a program co-ordinator at the Toronto District School Board in teaching and learning with technology, noted, “there’s an assumption that every student is walking around with a device that they can read a textbook on." This isn’t the case at all, she said.

The barrier is typically cost. Replacing a classroom set of textbooks can cost thousands of dollars, but then those books last for years. Comparing that expense to an annual licensing fee for digital textbooks, e-books and learning platforms requires a broad overview of all learning costs, not just a simplistic comparison between the cost of print textbook to a digital one. “There’s this misunderstanding that it’s actually less expensive for us. The reality is that it’s usually based on licensing,” Ms. Rivett said.

The annual fee for Edwin involves schools handing the two-in-one devices back to Nelson. Nelson cleans them up and repurposes them, but the educational resources published by Nelson and its partners remain stored in the cloud. The devices are then returned to the schools in September, with the school boards paying a new annual fee.

School boards have to evaluate whether the licensing fee makes sense for them compared with buying new textbooks and other learning materials. Another factor is the degree to which the digitized textbooks and “learning objects” are updated, compared to buying new physical textbooks.

Mr. Brown argues that Edwin can help reduce other budget expenses, “particularly when you’ve got really great thought leaders at the board level that say, ‘Hold on a minute, I spend the same amount or greater money, but I spend it on 25 different budget lines.’ This narrows that down to one budget line.”

Still, it’s a complicated equation. Different schools and boards have different needs. As a spokesperson from the Ontario Ministry of Education, for instance, noted, “Decisions regarding the selection, purchase and use of textbooks and/or supplementary resources, including online resources, are made by educators and school boards based on the local needs of students.” And different needs obviously mean different cost-and-benefit analyses.

Mr. Brown emphasized that it’s all about offering educational content in a new medium. He may describe Nelson as an ed-tech company now, but it is still in the business of publishing, not renting devices.

“The device is just altering the medium. We were never a paper company, either,” he said.