Thomas Thundat works on sensors that detect things at a molecular level, which has applications as diverse as improved airport security and detecting prostate cancer. With 40 patents already filed, Dr. Thundat has turned his attention to finding more efficient and environmentally friendly ways to extract oil from the oil sands of Western Canada.

Under the Canada Excellence Research Chairs program, the 58-year-old Kerala, India, native relocated from the Oak Ridge National Laboratory in Tennessee five and half years ago, where he was corporate fellow and leader of the Nanoscale Science and Devices Group, to head north to the University of Alberta.

In Edmonton, as the Canada Excellence Research Chair in Oil Sands Molecular Engineering, Dr. Thundat and his team are employing much the same nanosensor technology that he pioneered earlier in his career to detect extremely small amounts of chemicals. The sensors themselves consist of a number of microcantilevers stacked on top of each other, and they operate much like diving boards, bending when a certain molecule attaches itself to a particular coating placed on the cantilever and triggering the sensor.

Another development from the team's work in Alberta may prove to be a complete game changer, both in the oil sands and in many fields beyond.

Building on the electrical current work that Nikola Tesla first experimented with in the late 19th century, Dr. Thundat and his 30-member team have developed single-wire technology to power sensors, and many other things besides.

The new technology, which only requires one wire to power a device rather than the traditional two, has helped catapult his team's work with sensors to another level.

"One of the reasons a lot of the sensors we were working with in Tennessee did not mature is because of the battery," he says. "We have really small sensors, the size of a pill, but the battery is 10 times bigger and it has a limited lifetime … It doesn't work."

But the new technology, for which a patent is currently pending, went even further than that as the team members found they didn't even need the single wire.

"It started out being on a single wire, but we very quickly found out that you could do it over surfaces," says Charles van Neste, who has worked with Dr. Thundat since 2004. "Once you can do things over surfaces, then the capabilities just go through the roof because surfaces are everywhere."

The possibilities that this new technology, which is officially termed "quasi-wireless capacitive power transfer," are almost endless, both in industry such as the oil sands, and beyond.

"People have always been limited by two wires," says Dr. Thundat, "and if we can do it with one wire or one surface … you can actually power your cellphone if you leave it anywhere in your house … or leave your laptop on the table and it automatically powers."

Dr. Thundat's team is of the firm belief that it will speed our transformation into a community of smart cities and smart homes.

This could mean, for instance, powering a home by putting lights wherever you want without the need of plugs, Dr. Van Neste says.

"I think it's going to be a transformative technology because it can basically change how we do things, how we deliver electricity."

In the oil sands, the new technology offers the possibility of using the power transfer through the ground to heat the bitumen so it can be pumped out, rather than using the normal method of forcing steam deep underground to do the same thing. This method would save both water and money.

The technology also allows the by-product tailings ponds, containing a mixture of water, sand, silt, clay and bitumen residue, to settle faster and allow for quicker reclamation of the materials.

Unfortunately, it's not yet ready for use in the real world.

"We have done that in the lab scale but we haven't gone into the field yet," says Dr. Thundat. "It needs a lot more power than we can do in the lab."

That technology will also have an impact on industries such as agriculture, which rely on operating on a large scale over vast areas of land.

"It's under review right now where we are actually able to energize the soil in a localized area, so that has applications for all kinds of stuff," Dr. Van Neste says.

For instance, it offers the possibility of precision agriculture, where, instead of having to crop dust an entire field because of an outbreak in one location, the sensors, no longer tied to batteries or wires, will be able to pinpoint the location and have robots take care of it.

Dr. Thundat is also part of a team using his sensor technology to help detect the Zika virus. The sensors are being tailored so that the coating on the microcantilevers attaches itself to molecules of the virus, and though he says that the work "is coming along very well," it's still not ready for public release as yet.

"Basically you want to make sure that what you're detecting is 100-per-cent Zika virus," he says. 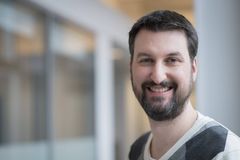 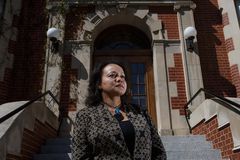