The Winnipeg Falcons went to Antwerp in 1920 aboard a ship called the Melita and, when they disembarked, what they did was win hockey gold at the Olympics. Of course. I mean, obviously. That's what Canadian hockey teams do, Olympicly. What's the secret? Apart from skating faster, passing better, scoring ridiculously good goals? Our superior grit, not to mention our pluck. Spy inside our hearts and that's what's there, grit, pluck, gumption - circulating with the, you know, regular blood. It's what wins us hockey gold - that, and because we're Canadian and nobody else is.

Or so we thought. History doesn't necessarily agree. That's history's job: to complicate what seemed so straightforward. History sees a glass of water on the counter and has to dump in a big spoonful of flour, and stir.

I'm not saying those 1920 Falcons weren't great. Or the Toronto Granites from 1924. I have only respect for the senior teams that used to defend our national honour at all those old Olympics and world championships. Belleville McFarlands! Vees and Sea Fleas, Eaters of Trail Smoke! Hats off to you all. Great work, Whitbyites, Lethbridgers, Pentictonavians!

Trounced is the word the newspapers used in 1920 to describe our 15-0 victory over Czechoslovakia - a good word, deriving from the Middle English for bouncing mercilessly next to someone on a trampoline until they fall down and still you won't stop, even when they say please. We've done a lot of that over the years, bamboozling Hungarians and shamwowing Austrians. Early Olympic hockey looks like we were punishing all the novice hockey nations guilty of the crime of loving our game, wanting to learn from us, be like us.

Not so. The Falcons ran clinics for their opponents, tutoring before they trounced. In 1924, the Granites schooled the Swiss in the principle that, if you let us score 33 goals while notching none for yourself, that's truly embarrassing for you.

Tough love? Remember, hockey was really the only imperialism we had available to us for a long time. Plus, did we have a choice? "We weren't trying to rub it in," an early Canadian official explained. "They would never improve if we played down to their level." Exactly. We also realized that, to be triumphing properly, we needed verbs that reflected the magnificent margins of our whompings. This took a while, mostly because our inbred northern reserve wouldn't let us be sore winners.

Topple, scuttle, stun: All the vanquisher verbs we now take for granted have roots in early Olympic hockey. Useful rules of thumb: Verbs associated with fairy-tale ogres marauding through upland villages also work for big hockey victories, e.g. smash, crush, quash. The contractor renovating your basement is a good guide, too: hammer, plaster, shellac. Culinary terms don't really translate, which is too bad, considering the satisfaction involved in saying words such as fricassee and spatchcock .

What would be great would be if these Olympics were decided on merit, and our alloy of Crosbys, Iginlas and Brodeurs provided all the mettle we'd need. But after nearly a century of sending teams to worldly tournaments, we know there's a four-part formula that decides these things. Without the other three determinants - nautical, nominal and botanical - there's only so far the hockey can carry us.

This one is pretty obvious. Who believes that the 1920 Falcons could have won without Canadian Pacific's Melita to ship them to Belgium? Where would they have been without it? Saint John is where. The ship's carpenter is supposed to have carved the sticks they wielded in Antwerp, which is pretty great if true.

I guess the Granites could have steered overland to Chamonix in 1924. They probably would have been better for it, in terms of bonding and generally toughening up as they trekked the sea ice between Alaska and Siberia, along the Silk Route, quick left at Damascus, and straight on through via the Appian Way and the Path of Righteousness. Instead, they boarded the Montcalm.

How much does the quality of the crossing matter? It's true that the 1936 Port Arthur Bearcats had a terrible time getting to the Nazi Olympics aboard the Duchess of Atholl, a.k.a. the Rocking Duchess, puking out so much Canadian pluck that they lost the gold to Britain. Medically speaking.

Still, of the seven golds we've won, teams travelling by air account for as few as those catching the train: a paltry one each. When we've gone big and waterborne, we've won five. The numbers don't lie: Our winningest way to the Olympics has smokestacks and ring buoys to toss in case of goalie overboard.

Science has made huge strides when it comes to hockey, and you know what else? Inroads. From Malcolm Gladwell, we've learned that, if Sidney Crosby wanted to be really great, he should have been born in January, not August. Bob Sirois has demonstrated the NHL's allergy to Quebeckers. And many people not named Don Cherry have made what can only be called headway in the area of concussions.

Science has had no luck in isolating the genome that explains what makes Bobbys so crucial in the hockey context. Genome? I may mean isotope. Either way, until someone cracks the code, we'll go with good old Canadian guesswork.

You have to have one. In 1920, the Falcons had Bobby Benson - no star, I don't think, but he did purvey a certain key, well, Bobbyality. You know what I'm talking about. It's as much a condition of mind as a set of skills, a willingness to block shots and lose teeth, play hurt, or swing your stick like a mad woodchopper in case the national interest might be served by someone's ankle being broken.

I know what you're thinking and, yes, true enough: The '24 Granites had no Bobby. They still won. What about all our great women's teams? Mainly Bobbyless. Here's the thing: Our Bobbys aren't always named Bobby. Ryan Smyth, for instance, is pure Bobby, other than his name. Hooley Smith, Seth Martin. Hayley Wickenheiser - I hope she won't mind me saying - is what the Spanish would call Bobbyissima.

My best guess? There are reasons we husband our Bobbys so carefully. Overt Bobbys (a) are more easily neutralized, and (b) what's to keep Norwegians from filching our Bobbyness and applying it to every young Ole-Kristian?

This year? Wish I could divulge who we have for Bobbys. Sorry. Let's just say I'm not worried.

Which is more than I can say about our leaf.

The Falcons wore sweaters the colour of queasy mustard. Since then, Canada has worn white to the Olympics, and also red. In 1948, the sweaters turned air-force blue. To sum up: Colours don't matter.

It's the maple leaf on the sweater that's vital. It symbolizes our strength, our beauty, our syrup. The beaver has its place, too, symbolically, except that the male of the species has been dogged since ancient times by the disturbing legend? rumour? fact? that, when pursued, he'll sometimes chew off his testicles and leave them for his pursuer.

Maple leaves don't do this, and neither does hockey. That's one of the things we love about the game: Hockey, when pursued, retains its testicles.

But. The leaf. The Falcons had one of the best, 49 points, lean and spiky, a bit of an austerity leaf, I guess, with the Great War just over.

In 1972, our leaf was so big and arrogant it didn't fit the sweater, and Paul Henderson looked like Nature had him halfway down its maw. To scare the Soviets? In 1976, another mega-leaf, though sliced in half, perhaps in memory of all those national leaves shredded by lawn mowers.

In 1996, a man appeared within the leaf, bisecting halves of red and black, probably to represent the hockey blood we shed and our bad moods, respectively.

Which gets us to Vancouver. It's late to be second-guessing Steve Yzerman, possibly even un-Canadian. Still, someone should speak up, and if not now, when? Looking back, the best leaves we've worn could have been free-handed by bright kids with crayons, and tongues sticking out to help them concentrate. This year's appears to have been rendered on a computer by government robots.

It's not awful, what's there. It's what isn't there that's the problem.

Let me ask you a question: How many Canadian teams have won gold wearing a maple leaf that lacked its petiole? Exactly right: none.

If it seems a small point, that's what it is. Little stalk-like bit at the bottom? Connects the leaf to its branch? The petiole.

Where is it? It looks - forgetful. It's insulting to botany. If a real leaf can't do without its petiole, why assume that a hockey team could? How do you think a leaf feeds itself? Shifts to catch sunlight? An actual leaf without its petiole - how would that work? It wouldn't.

Too late now to fix the sweaters. With no petiole to our leaf, it's a lot of added pressure on both our stealth Bobbys and our hockey prowess. What we should have done is routed the team through Halifax, where they could have booked priority passage aboard, say, HMCS Charlottetown, asserting some quick sovereignty as they powered through the Northwest Passage, B.C.-ward, to glory. That probably would have been our best approach.

Stephen Smith is author of the soon-to-be published Puckstruck, about the culture of hockey.

Opinion
Will the Paul Henderson of politics please stand up?
April 23, 2011 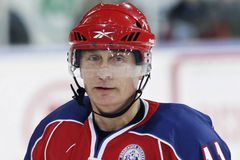 Review: Gretzky's Tears, by Stephen Brunt
October 30, 2009
Follow us on Twitter @globeandmail Opens in a new window
Report an error Editorial code of conduct
Due to technical reasons, we have temporarily removed commenting from our articles. We hope to have this fixed soon. Thank you for your patience. If you are looking to give feedback on our new site, please send it along to feedback@globeandmail.com. If you want to write a letter to the editor, please forward to letters@globeandmail.com.
Comments are closed