For me, the first sign that Japan was winning the car wars happened in the late 1970s, when my father bought a Honda instead of a Volkswagen or a Ford. "This is a better car," he said after taking delivery of his new Accord. "You should get one, too."

I ignored his advice. I was a committed German car buff. And I came by it honestly – when I was a boy, my dad had taken me to the Porsche factory in Stuttgart and taught me that this was sacred ground. No one understood engineering or cars like the Germans.

I saw German cars as expressions of a superior automotive faith. By then, Japanese cars were gaining popularity – several of my friends had Toyotas, Hondas and Datsuns (a Nissan export brand), but I dismissed them as rust-prone, under-built jokes.

Then my father bought one. As shifts of allegiance go, my father's purchase of a Honda was not unlike the Pope announcing that he was converting to Judaism. My father had always been a dyed-in-the-wool German car man.

I slowly began to see the wisdom of my dad's decision. Although his Honda had struck me as light and tinny, it proved to be a bulletproof machine. The Accord never failed to start, nothing broke and the electrical system was rock solid. My new VW Jetta, on the other hand, was a maintenance nightmare. In the first two years, I went through seven alternators and two clutch cables. The headlights repeatedly dimmed due to an elusive voltage drop. My wife and I were stranded on a trip to Tennessee when the Jetta's CV joints failed – at the time, the car had fewer than 30,000 kilometres on the clock.

For my next car purchase, I bought a Honda.

As it turned out, I was one small part of a tectonic shift in the automotive firmament. Once decried as cheap junk, Japanese cars were becoming the standard for quality, consistently topping the Consumer Reports and J.D. Power ratings. Toyota would surpass GM as the world's biggest car maker.

In the late 1950s and early 1960s, it was hard to see how Japan could rise to the top of the automotive world. After the Second World War, the Japanese car industry was crippled by the destruction of the nation's infrastructure and weak demand. Toyota almost went bankrupt in 1949. In 1950, its production was limited to 300 vehicles.

Back then, Japanese car makers were known mainly for their habit of ripping off designs from other manufacturers. Toyota's first passenger car, the 1936 Model AA, was a blatant copy of Dodge and Chevrolet designs, and some parts could actually be interchanged with the originals.

In 1957, Toyota set up a California headquarters that would turn out to be its North American beach head. A year later, the first Toyota was registered in California. By 1975, Toyota was top import brand in the United States, surpassing Volkswagen.

Japan's rise to automotive pre-eminence was based on several key strengths, including focus, consistency and detail-oriented engineering. Japanese auto makers were known for producing reliable cars with well-executed details. What they weren't famous for was design flair, innovative marketing and driving passion. Britain was renowned for stylistic masterpieces such as the Jaguar E-Type and the Lotus 49. Germany was the spiritual home of automotive performance, thanks to Porsche and BMW. The United States invented aspirational marketing.

But Japan systematically borrowed the best ideas from each of these countries, while simultaneously addressing their weaknesses: Japan replaced Britain's flaky electrical systems with solid, well-engineered products from suppliers such as Nippondenso. Japan studied Germany's superb mechanical designs and installed them in cars that the average consumer could afford. And Japan borrowed the best parts of Detroit marketing – such as a tiered model system that encouraged buyers to spend more for essentially the same car – but lowered production costs by limiting the range of choices. In the mid-1960s, a Detroit order sheet could run to a dozens pages or more, creating a logistical nightmare for factories that had to build cars that could be ordered with a nearly infinite mix of colours and options. Japanese manufacturers fixed the problem by offering two or three preset option packages and restricting colour choices.

By the late 1970s, Japan was making serious inroads in North America, even though the domestic car industry was protected by tariff walls. The conversion of knowledgeable car buffs such as my father was the beginning of a wholesale shift that made Japanese cars the preferred choice.

I have analyzed the design and engineering of the early Honda Accord that made my father a convert. Compared with German and American cars of the same era, it felt light and faintly fragile. In fact, it was perfectly engineered, with the same attention to mass reduction that had made the Second World War Zero fighter plane superior to the Allied aircraft of the time.

The Accord had a small, high-revving engine, which went against the grain of North American design – Detroit emphasized large, under-stressed motors. As with the Zero, which outperformed its rivals because of its low weight, every component in the Accord was built to a precise weight and matched to every other part of the machine.

I have owned a long series of Japanese cars, including a 1988 Honda Civic that lasted nearly 15 years and never needed a major repair. Like my dad's Accord, the Civic had a motor that seemed far too small for the job, but proved as durable as a tractor motor.

When the automotive world was dominated by V-8 Chevrolets and three-ton Cadillacs, it was hard to believe that you could make a car that was both light and tough. It was also hard to believe that you could sell one that didn't have a 500-item option list. Today, this is standard practice. Everyone's engines are smaller and everyone focuses on cutting weight where they can. When you consider Japan's place in the automotive firmament, remember that imitation is the sincerest form of flattery.

How car makers prepare for a future where people don’t want cars
November 5, 2015
Cars smaller than anything in Canada all the rage in Japan
November 5, 2015
In photos: The wackiest concept cars at the Tokyo Motor Show
Gallery
October 29, 2015 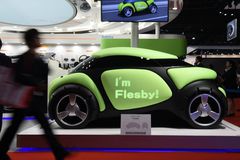