The People’s Car is the Holy Grail of industrial strategy. How do you make a machine that appeals to the millions? It starts with a low price, but there’s more to it than that. To be a great People’s Car, a machine must either be ultra-reliable (like the Toyota Corolla) or easy to fix (like the Trabant and the Model T.) And above all, it has to be useful.

A recent road test of Canada’s cheapest car, the base-model Nissan Micra, got me thinking about the tradition of the People’s Car. Here’s a look at ten that made history: 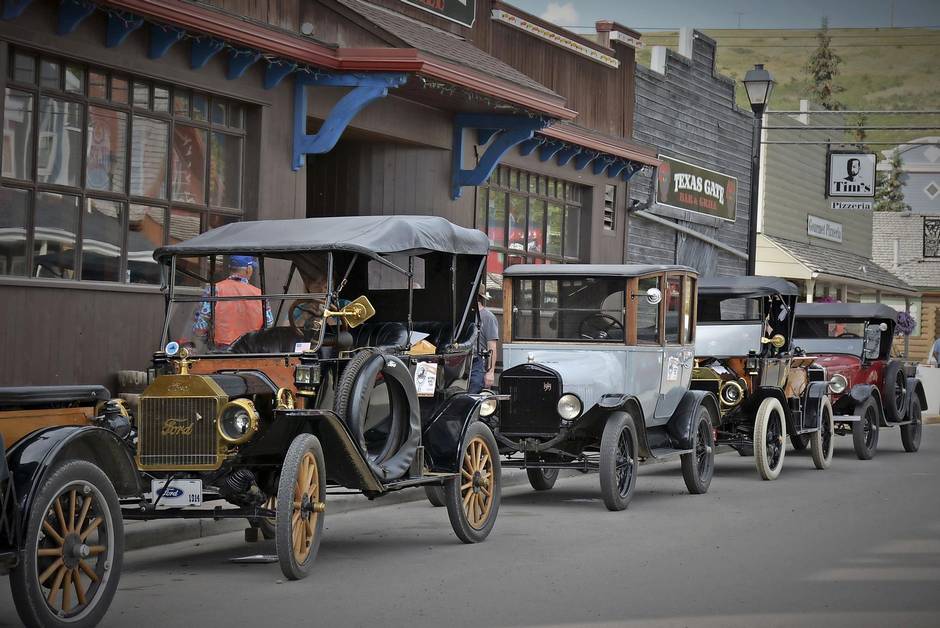 Until Henry Ford showed up, the roads were ruled by the horse and buggy. The Model T changed everything. From the outset, Ford’s mission was to make a car that anyone could buy: “I will build a motor car for the great multitude,” he said. “No man making a good salary will be unable to own one – and enjoy with his family the blessing of hours of pleasure in God’s great open spaces.”

The Model T cost $850 when it came to the market in 1908. By 1924, Ford cut the price to $260 through economies of scale and a relentless focus on efficiency - Ford pioneered the moving assembly line and eventually cut the time it took to assemble a Model T to 93 minutes. By the time the Model T went out of production, more than 16.5 million had been sold.

Commissioned by Adolf Hitler as part of his master plan to remake the European continent, the VW Beetle succeeded in ways the Fuhrer could never have imagined: it became a symbol of the peace movement, and an enduring counterculture touchstone.

The Beetle stayed in production longer than any car in history – the first one was made in 1938, and the last came off the line in 2003. More than 21 million were sold.

Although the Beetle had its faults, including a weak heating system and dodgy handling, its core strengths more than compensated. The Beetle was inexpensive and simple to repair. Countless Beetle drivers kept their beloved machines on the road with little more than a screwdriver, a set of pliers and a do-it-yourself manual. This was the People’s Car defined. 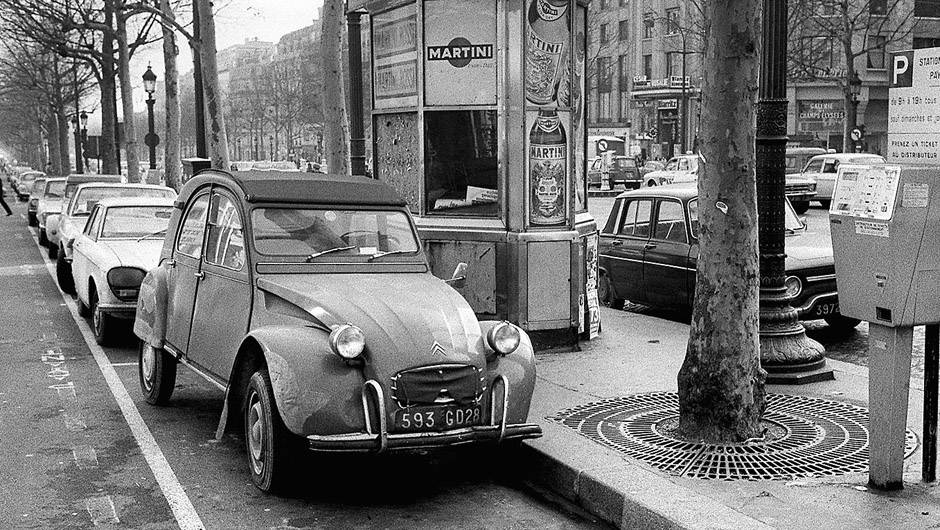 The 2CV was once described as “the most intelligent application of minimalism ever to succeed as a car.” It was designed in France in the period leading up to the Second World War, using a unique set of performance mandates: the 2CV had to carry two farmers and 100 kilograms of farm goods to market at 60 km/h along roads destroyed by artillery barrages and steel tank tracks.

Citroen management decreed fuel efficiency of three liters per 100 kilometers (78 mpg) and that the 2CV be capable of traversing a plowed field while cushioning a load of eggs. It had to be light, simple and easy to repair. And it had to be built cheaply enough to put it in the hands of millions.

It was a brilliant formula. The 2CV stayed in production from 1942 until 1990, and nearly four million were sold. In Europe, the 2CV reigns alongside the VW Beetle as one of great People’s Cars of all time. 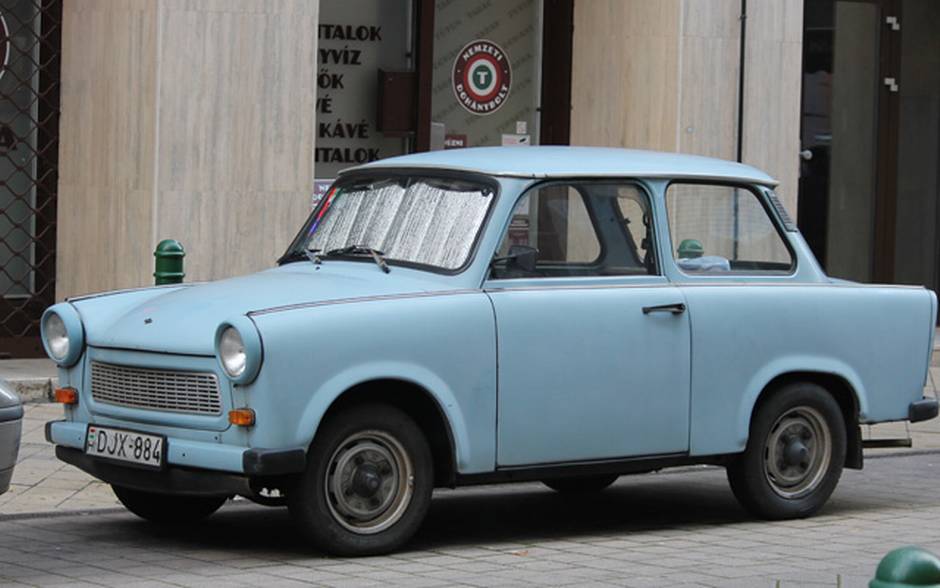 Produced in a state-owned factory in the former East Germany, the Trabant stands as a four-wheeled monument to the value of simplicity. The Trabant’s body was molded from resin-infused cardboard, and production tolerances were markedly loose – if you wanted close, perfect gaps on door and fender lines, the Trabant wasn’t your car. The loose fits were partly by design, and partly due to the factory’s notoriously poor standards.

Although it was relatively advanced when it came out in 1958, the Trabant soon fell behind the cars of the West thanks to communist bureaucrats who fouled up supply chains and vetoed design improvements. The Trabant used a soot-spewing two-stroke motor like those used on weed-trimmers, which meant that Trabant drivers had to carry cans of oil to mix with their gas at every fill-up. The Trabant rattled, it belched smoke, and it guzzled gas. But it was also cheap, tough, and easy to fix – the perfect recipe for a People’s Car. 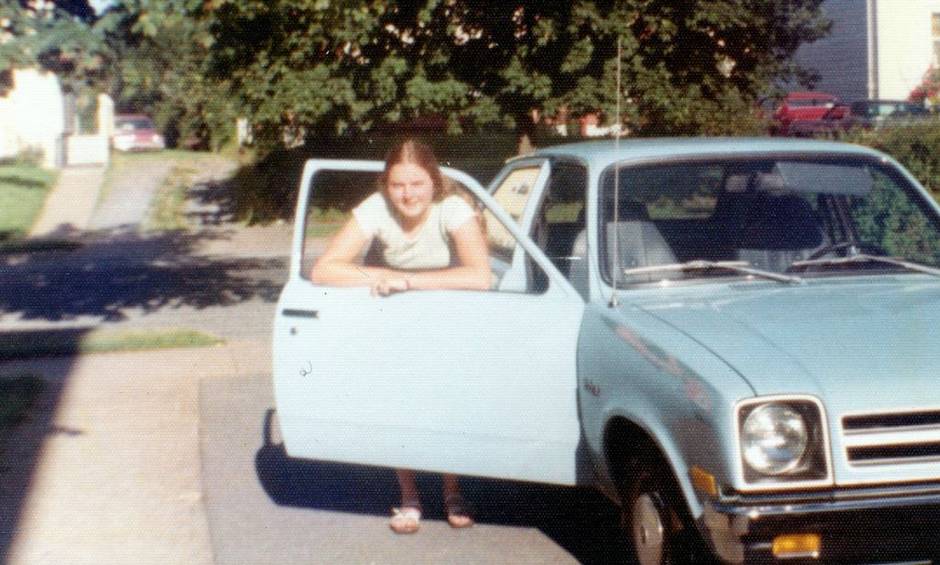 No one grew up dreaming of the day they’d own a Chevrolet Chevette. Produced from 1976 to 1987, the Chevette was a small car with cheap upholstery, uninspired styling, and a throwback drivetrain. Long after its competitors had moved on to front wheel drive, the Chevette soldiered on with a front-mounted engine that powered the rear wheels through a driveshaft. The Chevette’s price was low. And so was the build quality. In the 1980s, I came across a woman who was stranded when the driveshaft of her brand-new Chevette’s fell out, spearing itself into the highway outside Halifax. Breakdowns aside, the Chevette generally got the job done, and for a bargain-basement price. Nearly three million were sold. 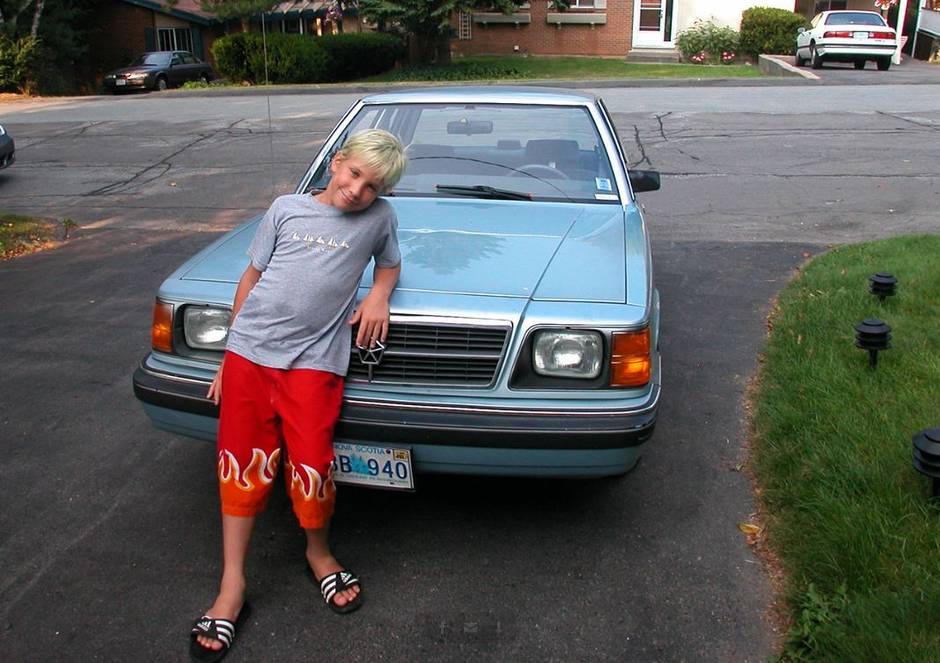 Some People’s Cars are inspired designs, like the Honda Civic, a low-cost machine that uses a race-car inspired VTEC valve train, or the VW Beetle, which combined a boxer motor with an artfully-shaped monocoque body structure. But then we come to the Chrysler K-Car, a machine notable only for its mechanical and aesthetic banality. The K-car was defined by a solid-beam rear axle, wheezing carburetors and, on some models, the infamous Corinthian leather and opera windows extolled by Ricardo Montalban (Chrysler’s former pitchman and star of Fantasy Island.) On the upside, you could get a K cheap – a feature that prompted my wife’s family to buy a series of them through the 1980s and 1990s. 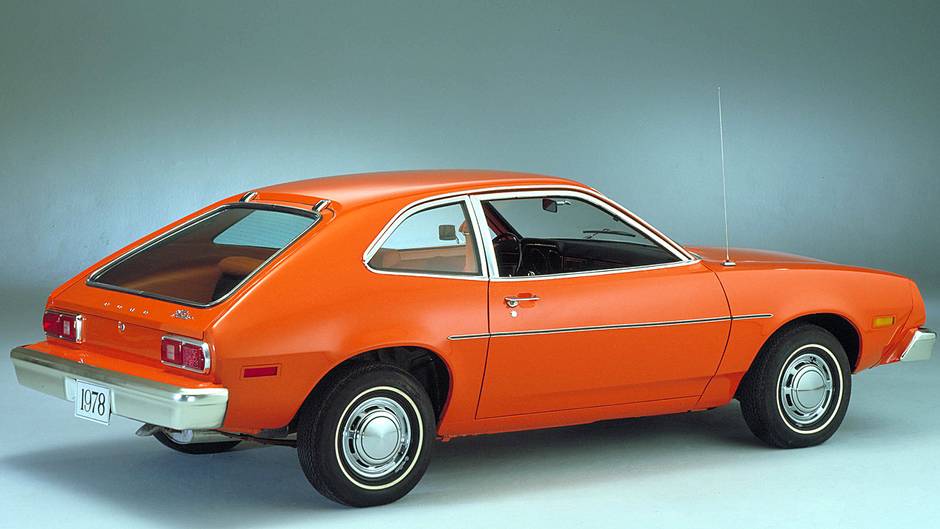 The Pinto was introduced by Ford in 1970 as “The Little Carefree Car.” The marketing slogan now seems ironic, because early Pintos gained infamy for their habit of exploding into flames in a rear-end collision. This problem was later pinned on a defective fuel system (the Pinto’s gas tank was mounted in the tail, and used a solid-metal fuel-filler pipe that snapped off when struck from behind, creating a four-wheeled fire bomb.)

Although engineers had advised a rubber filler pipe to prevent this, accountants ordered that the metal pipe be installed because it cost less. Ford faced a series of lawsuits connected to the fuel system defects. In 1977, a jury awarded a plaintiff $127 million, the largest product liability and negligence award in history at the time (the amount was later reduced.) None of this stopped the Pinto from becoming a People’s Car – it crushed domestic opponents like the Chevy Vega and the AMC Gremlin in the marketplace. By the time the Pinto went out of production, more than three million had been sold. 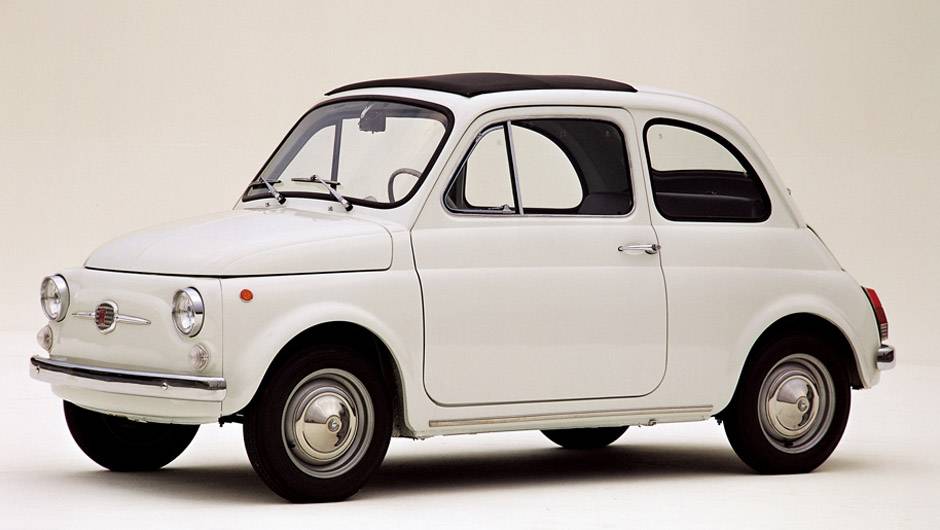 With nearly four million sold between 1957 and 1975, the Fiat 500 infested the roads of Europe. The 500 was a cheap, cheerful car, with a tiny body and an expansive sunroof. The 500 was less than three meters long, and had a 497 cc motor that most North Americans would consider inadequate for a ride-on lawn mower. This didn’t bother European buyers, who prized the 500 for its jelly-bean styling and parking ease. 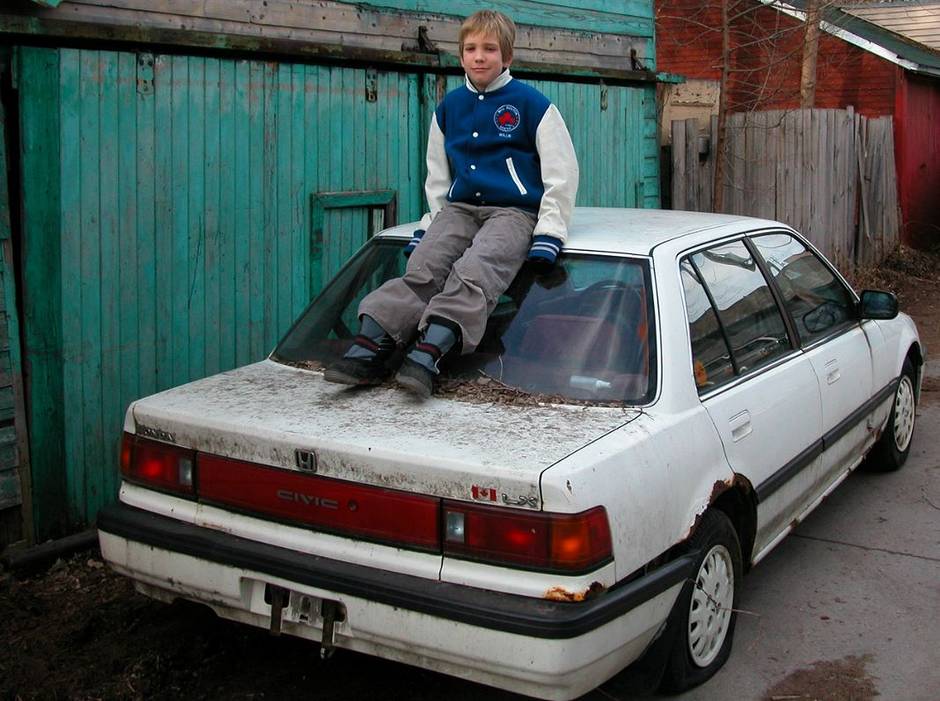 The Civic came out in 1972, and set new standards in the small-car market. Although it used the same mechanical layout as the iconic Mini (front wheel drive with a transversely-mounted, four-cylinder engine), the Civic was a far better car, and made the Mini look agricultural and dated by comparison. The first Civics were two door coupes, but the line later expanded to include three-door hatchbacks, four-door sedans and station wagons. I’ve owned three Civics in the past 40 years, and all of them lived up to the People’s Car ethos – they were inexpensive, tough, and useful. Our 1988 Civic, purchased new, lasted for more than 14 years under brutal conditions before succumbing to terminal rust. 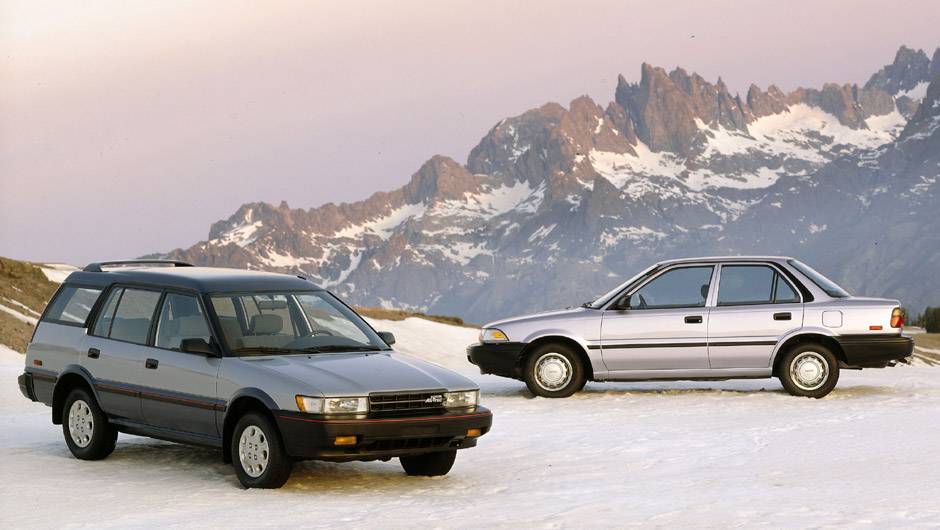 The Toyota Corolla has all the sex appeal of an Amana refrigerator. Yes, this is the very definition of an automotive appliance. Who cares? No car has carried as many people and their dreams as this one. The Corolla was introduced in 1966. By 2013, more than 40 million had been sold worldwide. That makes it the ultimate People’s Car.