Architect Mies van der Rohe believed that less is more. In other words, he would not be in the market for a GMC Yukon Denali. Measuring in at more than 17 feet and three tons, this is a vehicle for those who gravitate toward the king-sized, ultra-blinged, fully-loaded end of the scale.

The Yukon's sheer size and heft impress themselves upon you from the get-go: its steel flanks loom above you like castle walls, the roof is unreachable without a step ladder, and the ascent to the passenger compartment recalls your treehouse days. Not to worry: a set of power floorboards automatically glide into position as you open the door. The Yukon creates problems, but it solves them, too.

Everyone who rode in the Yukon during my test drive loved it. But, of course, they would – there was enough room inside for a tennis match and the seats were road-going Barcaloungers, sybaritic apparitions loaded with massagers, heaters and cooling systems. The Yukon had its own WiFi network, a TV screen and rear-seat climate controls.

This is the quintessential giant SUV, a class of vehicle with roots that reach back to the post-war era, when manufacturers came up with machines such as the International Harvester Travelall and the Chevy Suburban – slab-sided beasts created by mounting oversized station-wagon bodies on commercial truck frames.

The recipe was simple: build it big and they will come. The Yukon is the leather-lined, upscale descendant of these machines. Buyers include political security teams, soccer moms and professional athletes – there's enough leg and hip room for almost anyone, including an NFL lineman. Given the Yukon's starting price of almost $80,000, a pro sports career is almost a prerequisite.

What you get for your money is one of the greatest full-sized SUVs ever built: majestically large, magisterially silent – and really hard on gas. Around town, fuel consumption edged up toward 20 litres/100 km. On the highway, it dropped to 17.6. Fuelling a Yukon is like heating the White House in the dead of winter.

The Yukon is not so much a car as an extension of United States power. You drive it because you belong to the most powerful culture in history, fuel costs be damned. You cruise the highway like a Nimitz-class aircraft carrier patrolling the Persian Gulf, secure in your sheer power and continent-crushing mass. You ride high, looking over traffic from an Admiral's-deck perspective, scattering the Civics and Corollas that appear in your path like so many sampans. The hood is a vast metal acreage that looks like it could launch a squadron of F-35s.

The Yukon's handling was surprisingly good. Back in the day, body-on-frame SUVs were vehicle-control nightmares, compromised by their mass, high-roll centre and crude suspension. Smart drivers operated them like cruise ships, thinking well ahead so they could avoid sudden manoeuvres that could lead to a roll-over. In the new Yukon, the troubling physics of SUV operation are overcome with sheer power, clever engineering and brilliant software – it would be bad news to get this massive, top-heavy beast sideways, but the brakes are superb, the suspension is dialed-in and the stability system steps in the moment things start getting out of hand. No matter what I did, the Yukon stayed on an even keel.

The Yukon's appeal was easy to understand. Highway cruising was effortless and the vast luggage space took the stress out of packing. Then there was the passive-safety issue: in a collision with a smaller vehicle (which means almost everything this side of an 18-wheeler), the Yukon's sheer mass would prevail. A hockey-mom friend from years ago refused to drive anything but full-sized SUVs, because someone had told her they were safer in a crash.

The Yukon owner can take a grim, self-interested satisfaction in the physics of a head-on collision with a smaller car: all moving objects have kinetic energy proportional to their mass multiplied by the square of their speed. In other words, a Yukon will atomize a subcompact.

But there is no free lunch when it comes to vehicles, including the Yukon. Despite the superb brakes and stability control, your ability to manoeuvre out of a sudden emergency is compromised by the Yukon's height and weight – get it sideways and you will learn what roll centre really means.

Although sales of SUVs are increasing over all, most buyers are opting for more modestly-sized machines than the Yukon – full-size SUV sales are trending downward. It's easy to see why – parking the Yukon was a challenge, fill-ups were costly and for the majority of my driving, the Yukon's titanic interior space went unused.

Should you buy a Yukon? Maybe. There are some drivers it would be perfect for. LeBron James would appreciate the legroom. A well-heeled sports parent would revel in the three-row seating and vast luggage space. And then there are drivers who want to win the head-on collision – for that, it's hard to beat the Nimitz class.

The rise and fall of Detroit as the driving force in the car world
January 7, 2016 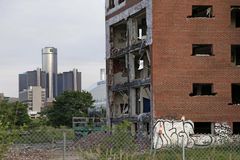 The rise and fall of NASCAR: Why tracks are removing seats
October 18, 2020 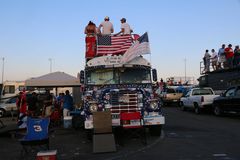