Spotted is Globe Drive writer Peter Cheney's weekly feature that takes you behind the scenes of his life as a vehicle and engineering journalist. We also highlight the best of your original photos and short video clips (10 seconds or less), which you should send with a short explanation. E-mail pcheney@globeandmail.com, find him on Twitter @cheneydrive (#spotted), or join him on Facebook (no login required). 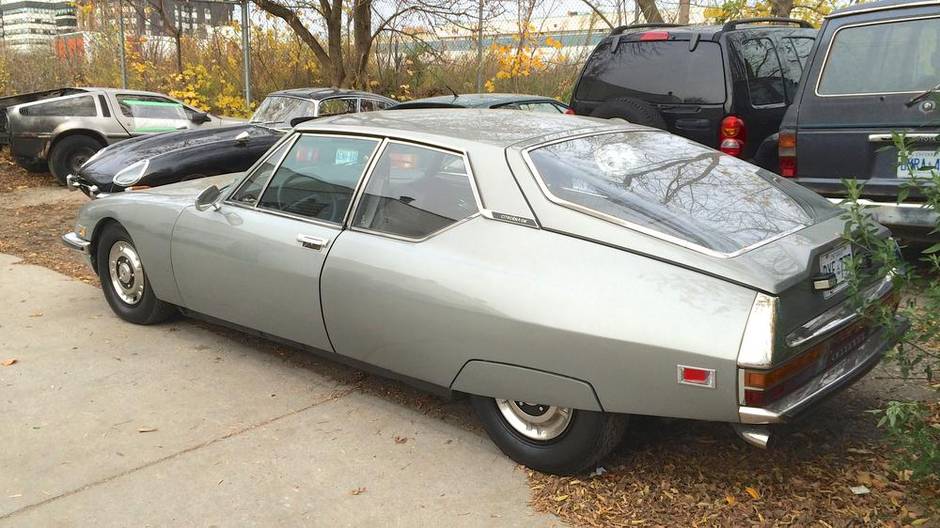 Some Things Can Only Be Made in France

The French have a style all their own. By way of proof, behold the amazing Citroen SM, which was produced from 1970 to 1975. The SM was noted for mechanical innovations that included variable-assist power steering, headlights that aimed themselves into turns, and a hydro-pneumatic suspension that allowed the SM to rise and fall like a camel kneeling for its jockey. I spotted this SM outside a classic-car repair shop in Toronto. 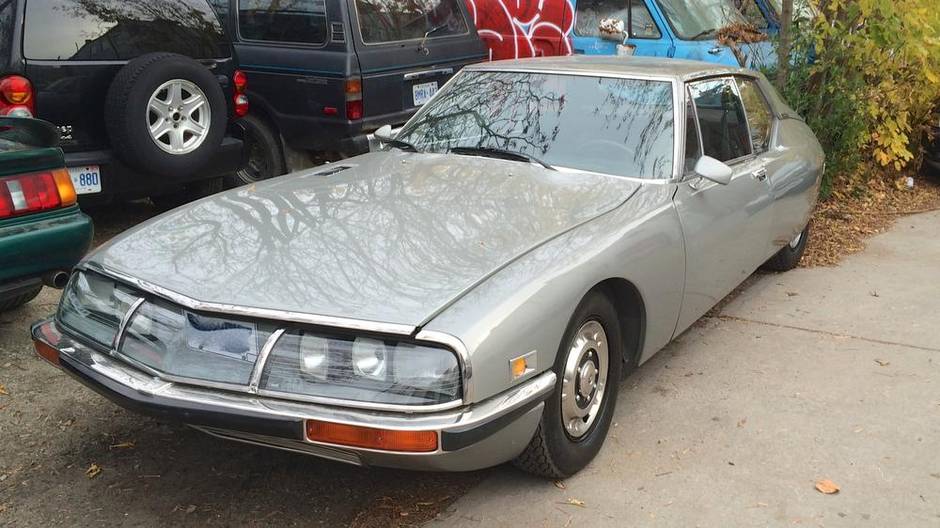 If Charles de Gaulle Were a Car…..

The SM’s styling is definitely unique. The design influences seemed to include an artillery shell, a tiger shark, and an art deco. building. And that has to be the most distinctively Gallic nose since General Charles De Gaulle ruled France. 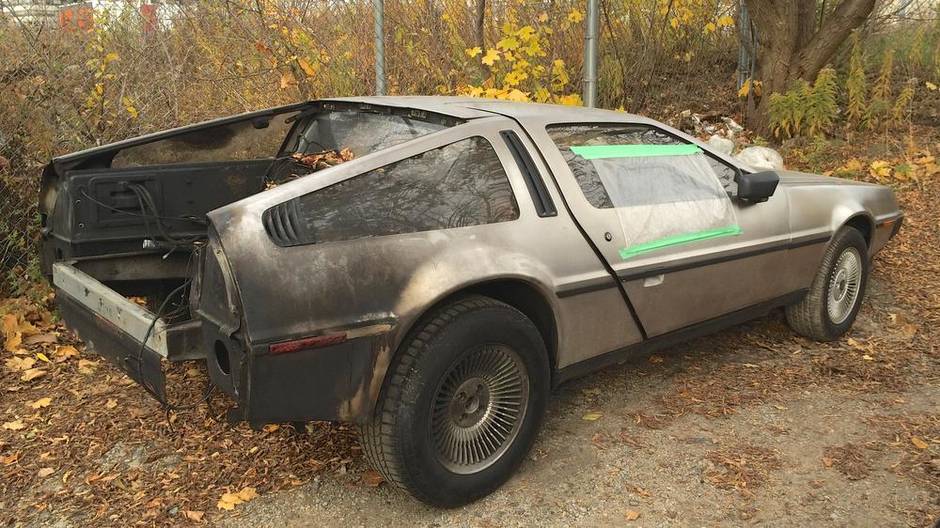 I also spotted this DeLorean DMC-12 at that Toronto repair shop. By the looks of it, the DeLorean either suffered an engine fire, or parked on top of a barbecue pit. Best known for its appearance in Back to the Future, the DMC-12 was the brainchild of John DeLorean, a GM executive and marketing whiz who quit the company to pursue his dream of a gull-winged sports car. Only 9000 DeLorean’s were ever built, and the company went bankrupt in 1982. 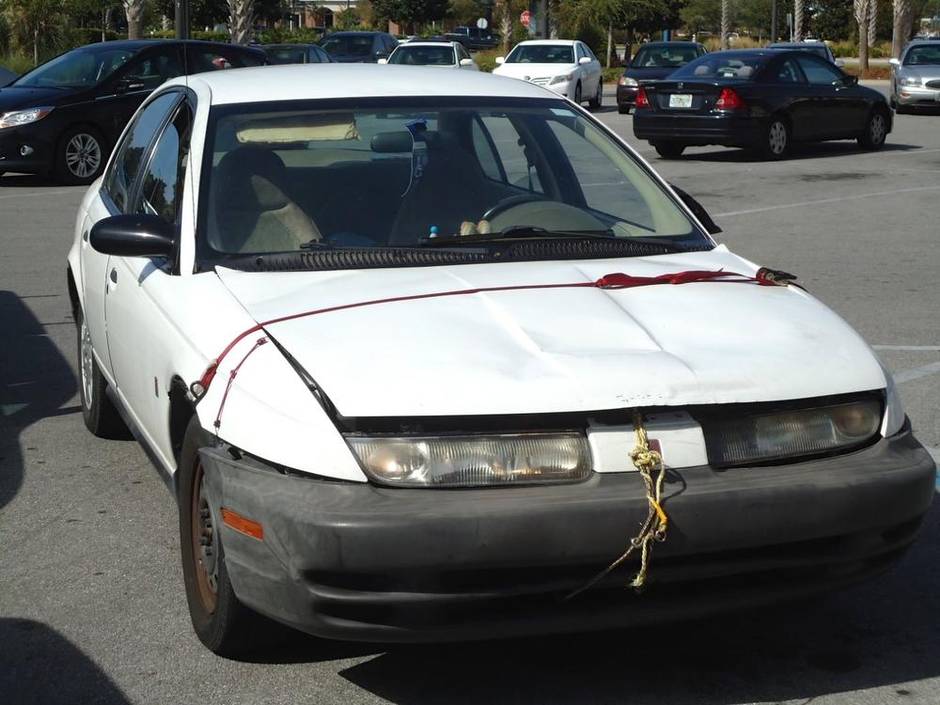 Why pay for a new hood latch when you can buy ratcheting hold down straps and bungee cords at Wal-Mart for a quarter of the price? Reader Dave Normandale spotted this do-it-yourself Saturn in Panama City, Florida. 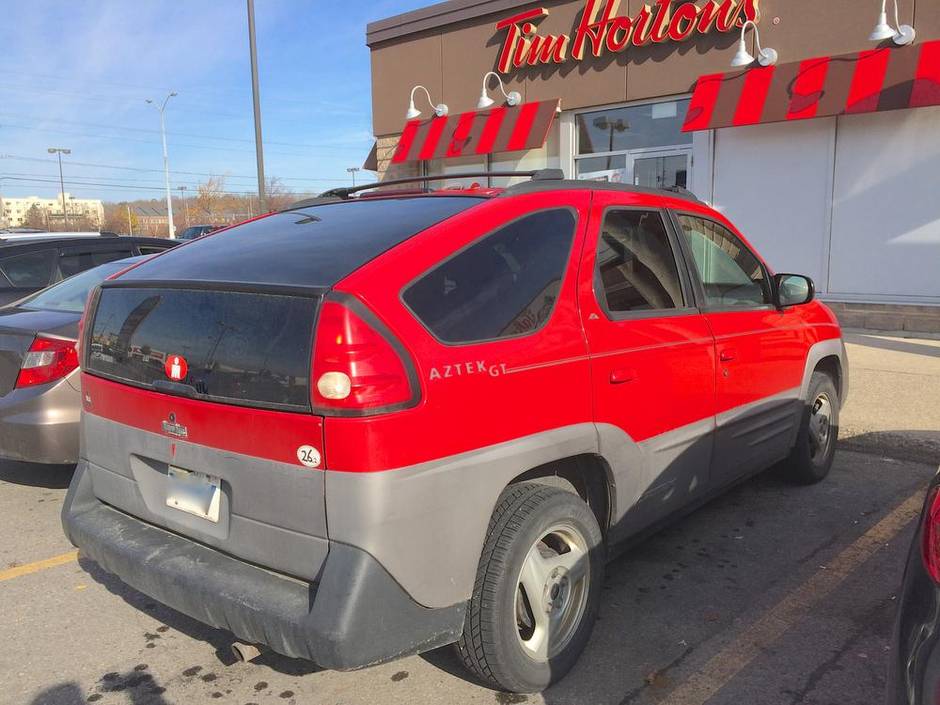 A Rolling Legend (but not the good kind)

The Pontiac Aztek has gone down in history as one of the ugliest vehicles of all time. The upside: you can get a great deal, because demand for the Aztek is low. I spotted this one outside a Tim Horton’s in Guelph, Ontario. 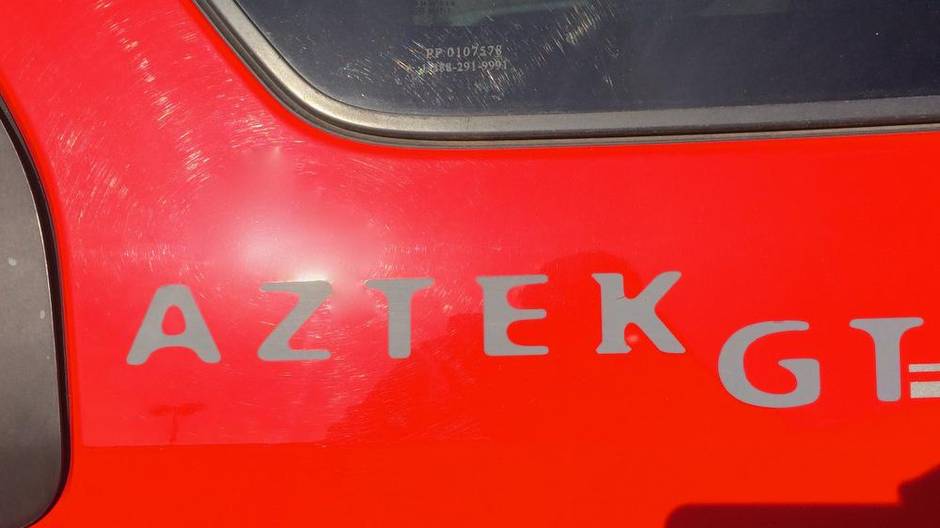 The “GT” label harkens back to the golden age of motoring. Short for “Gran Turismo,” it signified a high performance machine suitable for a skilled and wealthy driver who wanted to take a tour of Europe. GT takes on a whole new meaning when it’s applied to a Pontiac Aztek. 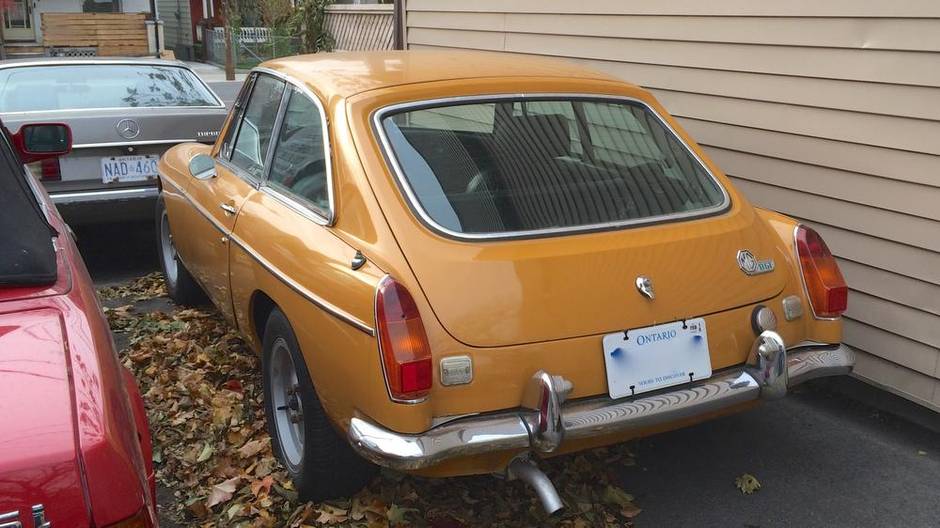 The iconic MGB is best known as a roadster. But it was also produced in hardtop form as the MGB-GT. The hardtop version offered increased storage space and freedom from the leaks that plagued the convertible. The GT was produced between 1965 and 1980. I spotted this one in Toronto. 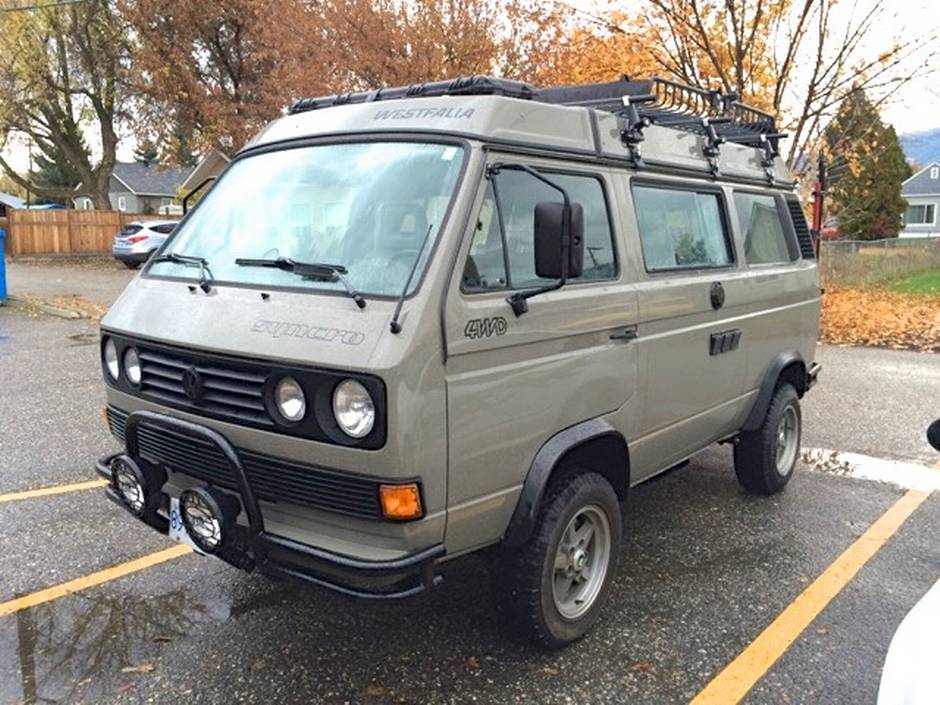 Reader Andy Betschler spotted this Volkswagen Syncro van in Vernon, B.C., and sent along some details: “The lucky owner told me he had about 10 months of restoration time into this great looking T-3 using as many original parts as possible,” Andy writes. “These unique and capable vehicles were produced by VW in limited numbers from 1985 to 1992 in a joint venture with Westfalia Werke and Steyr Puch, Austria. Engines offered included 1.6 litre turbo diesel producing 70 HP, a 1.9 litre producing 78 HP and a 2.1 later fuel injected engine with 112 HP output. Pretty humble numbers by North American standards. One has to keep in mind that we were in the middle of the energy crisis and the sky high cost of gas at the time.” 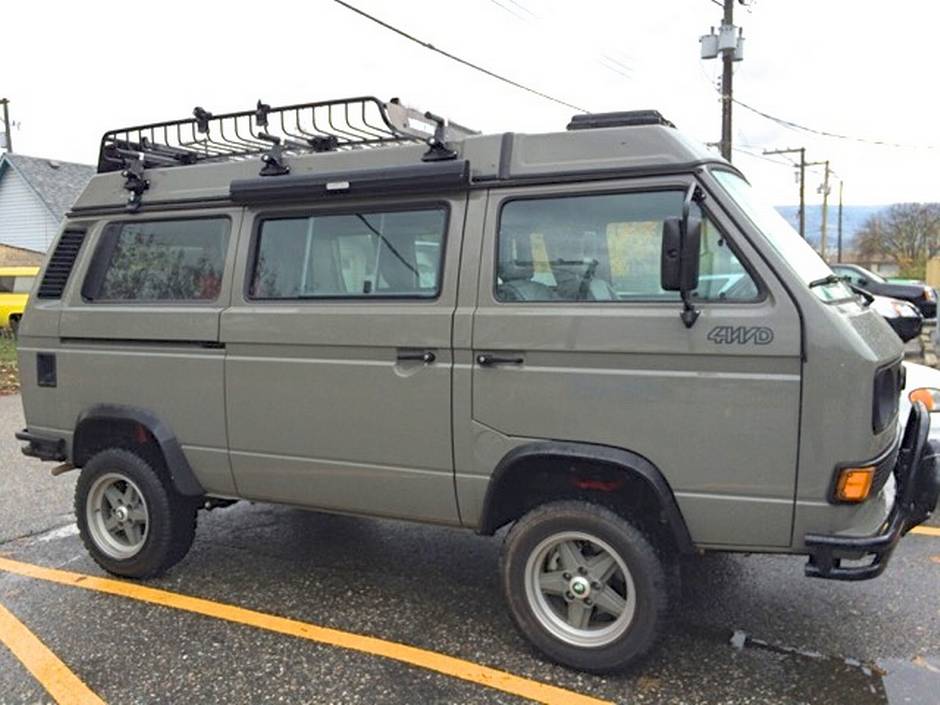 Here’s another angle on that Syncro Van. With four wheel drive, a locking rear differential and a snorkel system that let it ford deep streams, the Syncro was a cross between a minivan and a Jeep. 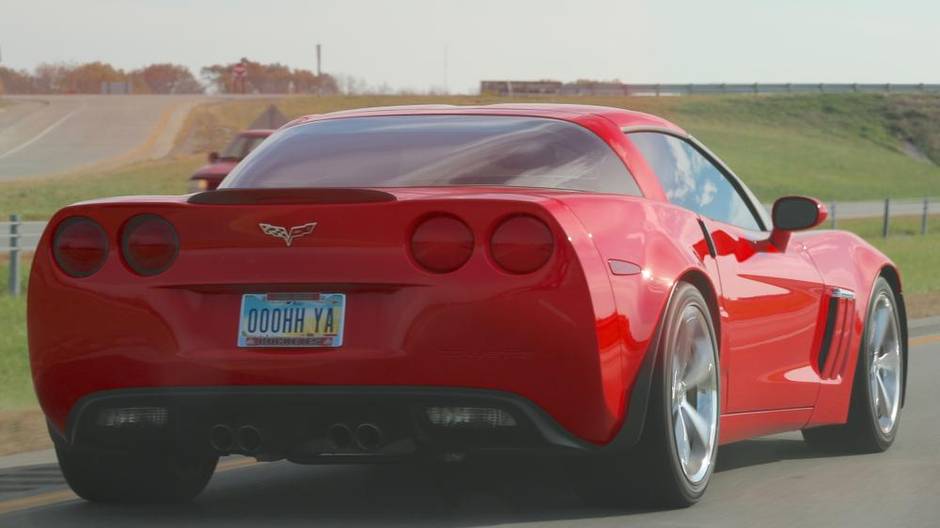 I just finished a long drive in the new C7 Corvette Stingray (story will be online next week.) As I learned, Corvette owners are a clan unto themselves. The driver of this Corvette gave me thumbs up, then accelerated away. I don’t know how much power he had under the hood, except that it was a lot. 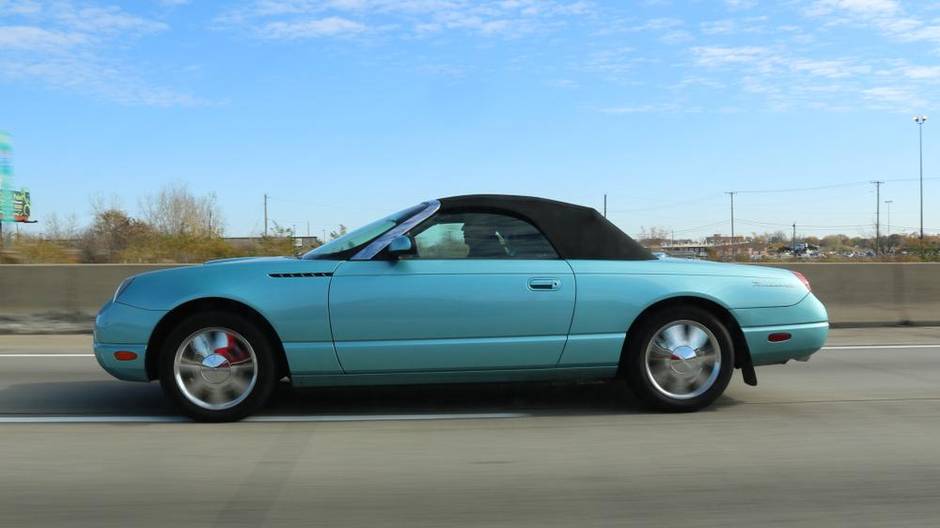 The Ford Thunderbird was one of the most iconic brands in the car world. It came to the market for the first time in 1955. But by the time the eleventh-generation car was released in 2002, the magic had slipped away. The last Thunderbird sold poorly, and was discontinued after just three years of production. I spotted this one in Ohio. 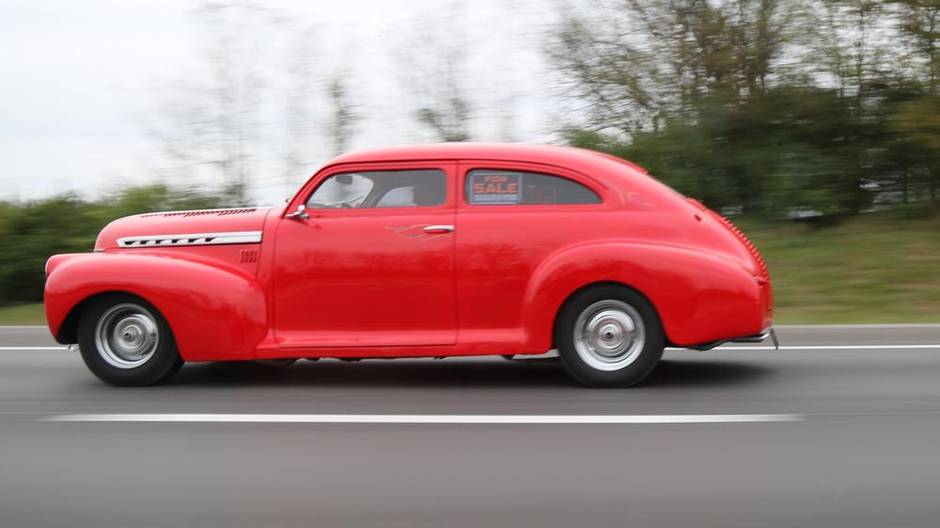 The Bygone Age of Do-It-Yourself

The hot rod was a symbol of post-war America. These are homemade cars that reflect the inventiveness and mechanical skill of their builders. Although there are still rodders out there, it’s a dying art. I spotted this hot rod on Interstate 75 in Kentucky. 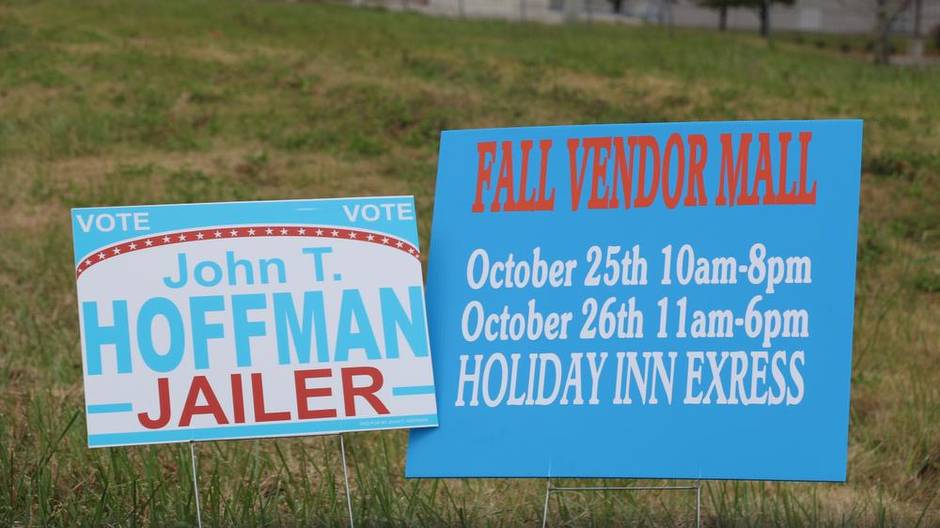 America, Where Even the Jailer Gets Elected

After years of traveling in the U.S., I’m now accustomed to the idea of elected sheriffs and judges. But this was my first jailer campaign sign. I spotted it in Kentucky.