Given the state of automotive technology, driving from Southern California to British Columbia isn't a challenge. But what if you tried that trip in an electric car? Can it be done?

I'm about to find out. Next week, I will pick up a new Tesla Model S in San Diego, and head north to Whistler, B.C. My only fuel will be electricity, and finding it can be tougher than sourcing gasoline. How tough? We'll see.

I will document my trip on globedrive.com, and will bring you along on what promises to be an incredibly interesting (and perhaps difficult) journey.

There's no better electric car for the mission than the Tesla Model S. This is a state-of-the-art electric vehicle, with a drivetrain that looks transplanted from the USS Enterprise, enough software to run an airliner and a display screen larger than many desktop computers.

A few friends own the Model S, and all give it rave reviews. They love driving it. They love its silent power. They love not buying gas. But none has ever tried taking the car on a long trip. Instead, my friends stay close to their home charging stations, using their Teslas for urban commutes, evening cruises and short jaunts to places where they know they can plug in.

My journey up the West Coast will be a test not just of the Model S, but of the transportation system itself. The Model S may be the car of the future, but our infrastructure is deeply rooted in the carbon-fuelled past.

According to the U.S. Department of Energy, there are nearly 170,000 gas stations in the United States. But for a Tesla driver, they're useless. The ideal place to top up a Tesla's battery is a Tesla Supercharger station – a specially built location where you can plug into a high-speed charging outlet. But there are just 105 Tesla Supercharger stations in North America – your chances of finding a gas station are about 1,600 times better than your chances of finding a Supercharger.

If they can't get to a Supercharger, long-distance electric-car drivers have options. They could check into a hotel that has a high-amperage outlet. They could pull into a campground and use a Winnebago plug-in. Or they could beg a homeowner for an extension cord. None of these options is ideal.

A Supercharger station can fill the Tesla's battery in about an hour (a partial charge is quicker). But filling up a Tesla with a 110-volt outlet is like putting fuel in a gas tank with an eyedropper – getting 33 kilometres of range takes about an hour, and a complete charge can take more than a day.

With luck, my West Coast odyssey will go well. The powerful navigation software built into the Model S will guide me to charge points, and the car I'll be driving has the largest battery Tesla offers: an 85 kilowatt-hour unit that can provide up to 700 km of range – but that's only at 30 km/h. At 90 km/h, the range falls to about 500 kilometres. And, at 120 km/h (the prevailing speed on most U.S. highways), the projected range goes down to about 300 kilometres. And turning up the air conditioning system consumes power and saps range. Ditto for the heater, lights and entertainment system.

My route is also optimized for the Tesla, with a high concentration of Supercharger stations (a look at the map on Tesla's website shows a couple of dozen along the road from San Diego to Squamish, B.C., which marks the northern end of the Supercharger route).

The Supercharger network is most developed on the east and west coasts of the United States. This isn't surprising, since they are home to major urban centres that attract people who fit Tesla's target demographic. Tesla buyers tend to fit a few categories: well-heeled environmentalists, tech-savvy early adopters and true believers who want the age of carbon fuel to end. You are more likely to sell a Tesla in Hollywood than in Trenton, Ga.

My Tesla odyssey should be cool. There's a lot to learn about this intriguing car, and whether it can really be used for long trips, as Tesla claims. I will be leaving San Diego on Aug. 19, and will file daily updates from the road. Check in at globedrive.com to see how it's going. (You can also follow me on social media – the links will be on the Globe Drive site.)

Wish me luck. And in case you were wondering – no, I'm not planning to bring a portable gas generator. That would be poor form. (Although it did cross my mind.)

Two hotel nights were provided to the writer, courtesy of Visit California. The tourism commission neither reviewed nor approved the text prior to publication.

All charged up: Pumping electricity at the Supercharger station
August 20, 2014 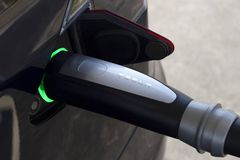 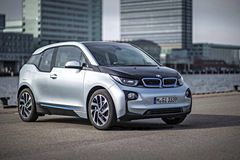 Experienced Drive writer fails his driving test - and you would too
June 30, 2014 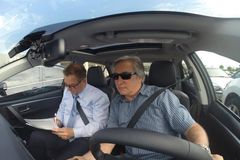 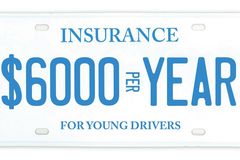