Anyone who drives a car that's even only a few years old will likely find the sound system in the new BMW 5 Series a big leap forward for the senses.

With 16 surround-sound speakers throughout the vehicle delivering a total 1,400 watts of power, it's a veritable concert theatre on wheels.

Crystal-clear, high-definition sound draws you in and makes you feel like you're listening to a live performance – the difference from older, traditional systems couldn't be more stark. It's a world removed from having two measly speakers in the front and another pair in the back.

It isn't just for audiophiles either, BMW says. While the new 16-speaker setup will generally be available just in more expensive luxury packages in the 5 Series, higher-end audio is quickly becoming a standard feature in more vehicles.

"Gone are the days when people brought their cars into the shop and ripped out the system," says Matt Wilson, national product manager for BMW Canada. "They now demand that from the manufacturers themselves."

Indeed they do, if a rash of recent moves and deals is anything to go by. BMW, for one, is adding Bowers & Wilkins speakers to its 5 Series in 2017 after introducing the British company's systems through its 7 Series last year.

Last September, Ford similarly announced it was partnering with B&O Play, the luxury car audio line created by Denmark's Bang & Olufsen that was acquired by Stamford, Conn.-based Harman International in 2015.

Previously found in Audi, Aston Martin and Mercedes-Benz vehicles, B&O Play's systems are expected to eventually land in all of Ford's cars and trucks.

Ford's Lincoln line has also partnered with Revel, Harman's most exclusive brand, starting with MKX models in 2015 and expanding to this year's MKZ. The new MKZ models offer up a whopping 1,200-watt, 20-speaker system, topping even BMW in sheer number of speakers.

The shift upmarket in recent years, along with the ubiquity of built-in smartphone and iPod connectivity in cars, has meant a corresponding collapse in the aftermarket stereo business. North American sales are expected to fall to $1.2-billion (U.S.) by 2020, just a third of what they were in 2012, according to research firm Strategy Analytics.

Auto manufacturers are attributing the change to rising consumer expectations and technological advances by the audio companies themselves.

The sound-quality improvements are the result of better hardware, but also more so from the software advances being applied in other areas of consumer audio.

Sonos, for example, in 2015 debuted TruePlay, a software feature that allows owners of its home speakers to fine-tune audio settings using their smartphone's microphone. The mic picks up sounds emitted by the speaker, which an app then processes into the perfect settings for whatever room the device is in.

"That has allowed us to take sound that's made for a large space and bring it down into a smaller space," says Carole Wilson, Canadian marketing manager for Lincoln. "Five years ago I don't think we were at this level of trying to get that ultimate sound experience."

The automobile industry's growing links to the consumer technology sector also means the opportunities for crossover are increasing, a trend that explains Samsung's $8-billion (U.S.) acquisition in November of Harman.

The South Korean company, known for its smartphones and televisions, is now seeing big potential in the car audio market.

Audio in all forms, including in cars, is becoming a new battleground for these consumer technology companies, so other companies such as Apple, Sony and others are likely to intensify their interest in the area. As advanced as it already is, this high-end shift may only be in its early days.

"That convergence between high-end audio, personal technologies and the automotive space is yet another indicator for all of these tendencies," says Werner Goertz, research director for analysis firm Gartner. 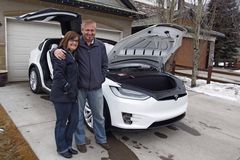 Car enthusiasts make case for autonomous driving
March 3, 2017
How we’ll get around in the future
March 1, 2017
Follow Peter Nowak on Twitter @peternowak
Report an error Editorial code of conduct
Due to technical reasons, we have temporarily removed commenting from our articles. We hope to have this fixed soon. Thank you for your patience. If you are looking to give feedback on our new site, please send it along to feedback@globeandmail.com. If you want to write a letter to the editor, please forward to letters@globeandmail.com.
Comments