To properly experience the Pebble Beach Concours d’Elegance, one arrives by dawn. Anyone who has ever been there says so.

The sun typically exists only as a pastel glow within the mist and fog rising from Monterey Bay, at 6:33 a.m. this particular Sunday. You’d feel the chill if it weren’t for the energy and anticipation as the classic cars begin taking their places along the 18th fairway.

A $375 ticket holder can’t get in until 10:30 a.m. Only those atop the Pebble social hierarchy, the entrants, judges and exhibitors who make the show, along with those who’ve paid $750 for Club D’Elegance or $2,500 Chairman’s Hospitality, begin the day with Dawn Patrol.

For instance, Brent Merrill of Willowdale, Ont., winner of Pebble’s American Classic Closed class in 2013 with his 1931 Cadillac 452A Fleetwood Coupe. 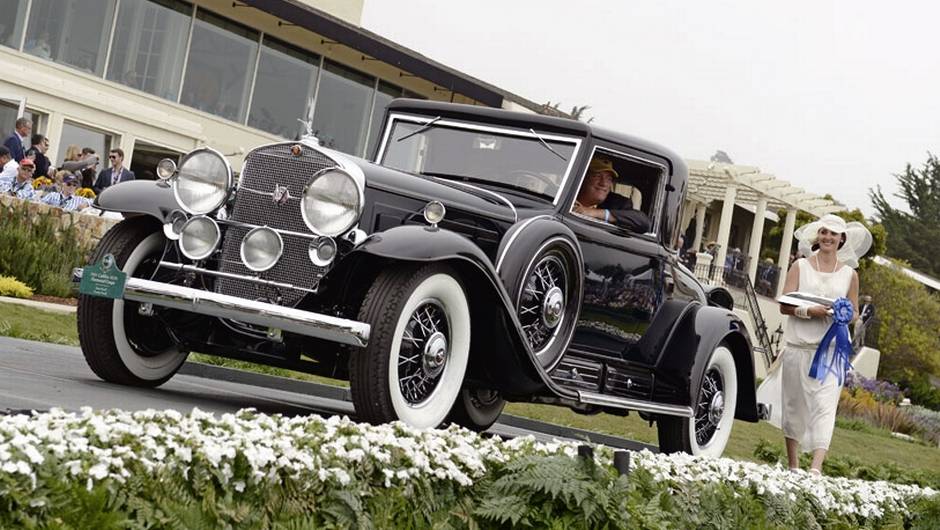 Merrill started out collecting 1950s American cars. He was looking for more at the 2005 Barrett-Jackson Scottsdale auction when an apple-green 1932 Auburn Boattail Speedster caught his eye. No fins! Yet its body tapered so sweetly to its conclusion, he couldn’t resist. As he recalls, he paid $375,000.

Merrill, CEO of Marinecorp Management Services, has feasted on two-seater American classics ever since.

His cars amassed awards at Ault Park in Cincinnati, and at Meadow Brook and St. John’s, Mich. A friend, who is a Pebble Beach judge, told the selection committee about his cars. An application form from the world’s foremost concours arrived shortly after in the mail.

“Some years, my application isn’t accepted,” Merrill says. “Some years, I show a car I don’t expect to win its class, but I think people should see – like this year’s 1931 Chrysler CG Imperial Two Door Convertible Coupe, an eight-cylinder up against V-12s, V-16s.” 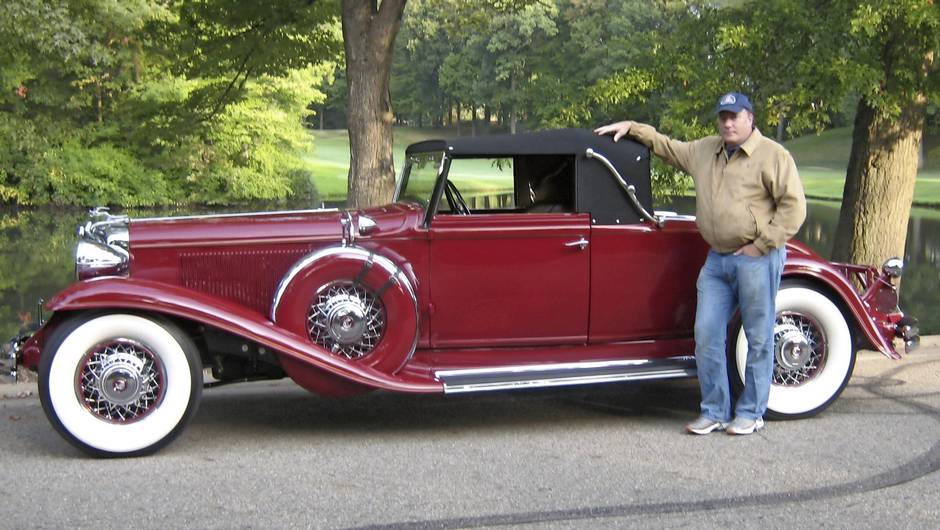 Merrill likes to buy cars restored by the best marque specialists – in this case, Joseph Morgan, of Windham, N.H. He addresses issues as they arise, and early this year delivered his car to RM Restoration in Blenheim, Ont., in preparation for Pebble Beach.

Related: How and Ontario shop became the go-to place for car collectors

He figures he’ll have spent $30,000 bringing the Chrysler up to standard. Shipping the car to California, another $2,500 each way. Accommodation and meals, $5,000. Competing at Pebble Beach is never done on the cheap.

Don McLellan, quality control manager for RM Auto Restoration, sets his alarm for 5 a.m., after assisting at RM Sotheby’s Monterey auction Saturday night. He needs to be on site before the high-profile clients.

RM has restored six Best of Show winners since 2001, three for Judge Joseph Cassini III, of West Orange, N.J. Cassini and wife, Margie, will arrive at dawn to drive their fresh-from-Blenheim 1931 Stutz DV32 with prototype body by LeBaron into position.

But McLellan and three RM colleagues must serve another three clients with equal attention – correcting any last-minute problems with spare bulbs, belts and fuses.

A 1957 BMW 507 owned by The Patterson Collection, and a 1937 Bugatti Type 57C Atalante (owner unidentified) are RM’s other restorations. As well, Merrill’s Chrysler must perform as flawlessly as the presumed Best in Show contenders.

Nigel Matthews, of Richmond, B.C., was judging a concours at Florence, Italy, as this was written. India’s Cartier Concours at New Delhi stood out among his international destinations in 2015.

Like entrants, judges pay their own expenses. He’s fortunate: Hagerty Classic Car Insurance, of which he is global director of client services, covers the bills. 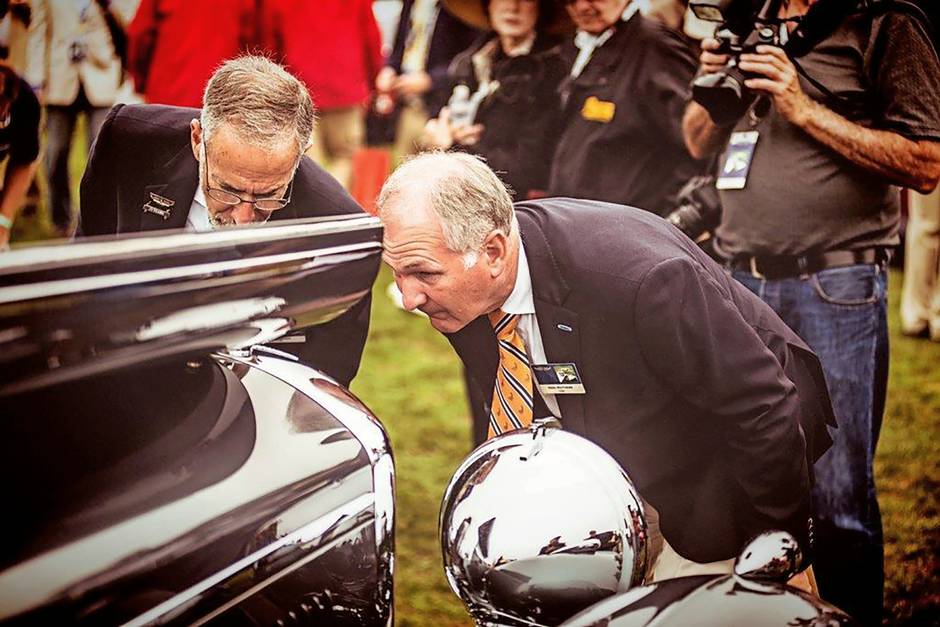 “When I was doing this on my own dime, I would stay in Gilroy, a 45-minute drive away,” Matthews says of the self-proclaimed Garlic Capital of the World.

Matthews’s father gave him a used MG Midget at the age of 17. Classic cars came later. After emigrating from England as a steward with Canadian Pacific Airlines in 1974, he turned to repairing and restoring Rolls-Royces and Ferraris, then insurance damage appraisal, then a decade administrating the B.C. government’s collector/vintage licensing and insurance, greatly expanding his expertise.

John Carlson, a Pebble Beach chief class judge, provided the introduction that led to his judging at Pebble beginning in 2005. Carlson, of Belcarra, B.C., is chief judge at the Crescent Beach Concours, Sept. 3, at Surrey, B.C., and Cobble Beach, north of Owen Sound, Ont., Sept. 18.

Along with Dawn Patrol, Matthews relishes Thursday’s Tour d’Elegance. “If the judges end up in a tie situation and one car went in the rally and the other didn’t, that breaks the tie,” he explains. “The year I judged The Cars of The Maharajas, a Bentley and a Duesenberg were tied for points – but the Bentley owner had not arrived until Friday. So the Duesenberg was the class winner.”

As one of three judges selecting The Elegance in Motion Trophy winner, Matthews narrows the field to three or four candidates at the tour. As well, he’s judging the Delahaye and Chapron Coachwork classes. “I really do have a passion for vehicles of the thirties, particularly the French cars.”

Next up for Matthews, the Canadian Concours d’Elegance within the Luxury and Supercar Weekend, as founding chief judge, at Vancouver’s VanDusen Botannical Gardens, Sept. 9 to 11.

Jay Koka’s studio is in Kitchener, Ont., but after 28 years of showing paintings at the Automotive Fine Arts Society’s exhibition at Pebble Beach, Monterey and Carmel, they feel a lot like home. 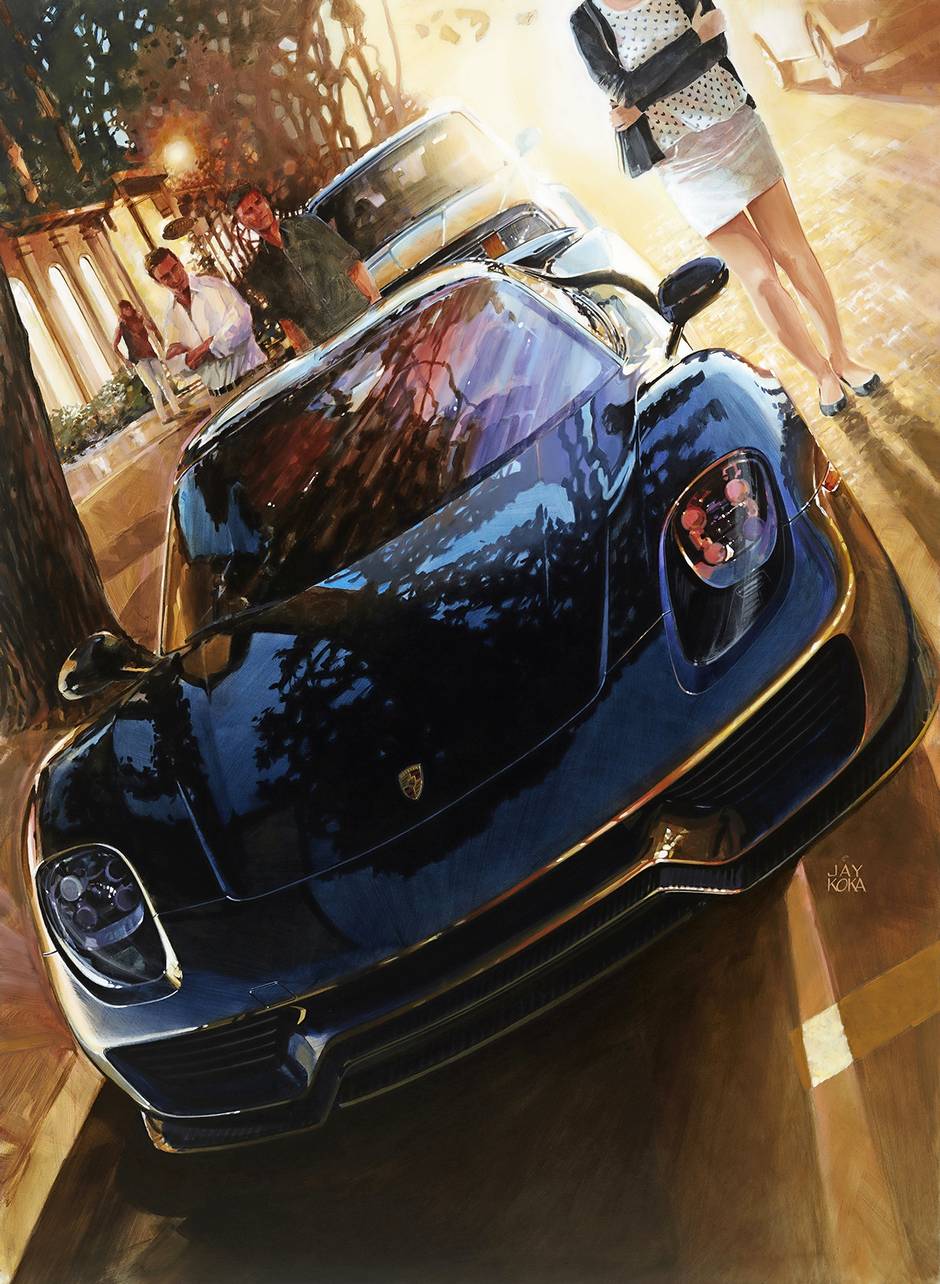 A work he’s premiering this year, 918 on Ocean, resulted from a walk along Carmel’s Ocean Avenue after dinner last year.

The first Porsche 918 he’d ever seen was parked across the busy multilane. Up close, reflections of passing cars’ tail lamps, the glare of approaching headlamps, arrested his eyes: He’d paint this car, in this setting.

Travel often sparks his work. A Ferrari F12 glows red within a Hanoi market. Breathless in Shangai showcases a Ferrari 488 GTB. Wherever he goes, he returns to Pebble Beach every August. “This is a judged show,” he says. “There’s significant prestige in winning an award here.”