One by one, Mark Fields and other Ford executives stepped onstage dressed in Silicon Valley-styled garb of blazer over an open-collar shirt and jeans, thus stoking anticipation for an announcement that failed to materialize.

Mr. Fields, president and chief executive officer of Ford Motor Co., teased the audience further at his CES presentation on Tuesday by emphasizing the company's resolve to enter the transportation-services field. He noted that auto makers share little of the $5.4-trillion (U.S.) of annual global revenue in the sector, compared with Ford's approximately 6-per-cent share of the $2.3-trillion automotive industry.

Alphabet Inc.'s Google has logged a reported 2.1 million kilometres testing autonomous vehicles, including one without a steering wheel. Just as mobile devices can be used today to summon an Uber vehicle, conceivably they may be able to call up a driverless Google car in the future.

And auto makers are increasingly partnering with technology companies, so when Mr. Fields brought chief technical officer Raj Nair on stage, the audience expected confirmation of a hotly rumoured deal between Ford and Google. Instead, Mr. Nair discussed progress in autonomous vehicle development, with no mention of the Silicon Valley company.

"We will share more news as we continue to make progress," Mr. Fields said at the end of his presentation, eliciting chuckles from assembled media at the Mandalay Bay convention centre. Pressed afterward about Google specifically, he would say only that discussions continue with several tech companies. Immediate speculation had the companies saving a splash for the North American International Auto Show next week in Detroit.

Instead, Mr. Fields announced that Ford would add 20 Fusions to its existing fleet of 10 autonomous test vehicles for experimentation in California, Arizona and Michigan. The vehicles will be equipped with the latest-generation sensor developed by Velodyne Inc., called the solid-state hybrid ultra puck. Shaped like a hockey puck, the sensor fits on the side-view mirror and extends range for 3-D mapping by 200 metres over the current gear.

In autonomous vehicle development, Mr. Nair claimed that Tesla Motors Inc. and all other auto makers are operating at Level 3 as defined by the Society of Automotive Engineers, while Ford is working on Level 4. At Level 3, there is expectation that the driver will respond to a request for intervention. At Level 4, the vehicle should be able to operate independently. To sell to consumers, it will take reaching Level 5, where vehicles can "handle all weather conditions," Mr. Fields said.

The disruption of the traditional auto industry is reaching a higher gear, industry analyst Adam Jonas of Morgan Stanley noted on Tuesday.

"We anticipate developments in the shared, autonomous and electric vehicle space to be even more pronounced in 2016," Mr. Jonas wrote in a report, "with non-traditional/software firms aligning resources and strategies to potentially revolutionize vehicular transport."

The Consumer Technology Association, sponsor of CES, estimates that one million autonomous vehicles will be produced annually by 2030. Mr. Fields predicted that the automotive industry will see major technological breakthroughs beginning in 2016. "At the beginning of this year you will see us change pretty dramatically, to become an automobile and a mobility company … even as we retain emphasis on our core business," he said.

In Silicon Valley-related news, he announced that Sync 3, Ford's evolving infotainment package, will be enabled with Apple CarPlay and Android capabilities for the 2017 model year. There will be 43 million Sync-equipped vehicles on the road by 2020, Mr. Fields projected.

Amazon.com Inc. vice-president Greg Hart joined Mr. Fields on stage to announce a connectivity partnership involving Amazon Echo. Using a Siri-like voice command, the driver will be able to open the garage door or turn on the kitchen lights before arriving home. From home, the car owner will be able to check data such as the range left on the electric battery.

"We are completely rethinking how we approach the business," Mr. Fields said. "We have one foot in today, and one foot in tomorrow. It is all about understanding what the world will look like five … 10 … 15 years out."

What's changing over time is the distance that drivers are commuting into megacities, research showing 1.2 billion people worldwide logging at least 50 minutes a day in their vehicles.

There are more than 800 million parking spaces in the United States but the average time to find an open spot is taking more time, contributing to urban congestion. Connectivity and automation can address the challenge. In fact, at CES last year, BMW's driverless car sought out an empty parking space atop a casino parking lot and parked itself.

The company is also involved in an auto-sharing pilot in London, finding that millennials are most interested in the service, and moreover, owners are more interested in renting other cars and lending out their own.

Ken Washington, Ford's vice-president of research and advanced engineering, also discussed a development challenge that Ford announced in conjunction with DJI, a developer of professional-grade drone systems and software. Using Ford Sync AppLink or OpenXC, the companies aim to develop drone-to-vehicle communications, which would enable surveys of emergency zones, the drones taking off and landing from the bed of a F-150 pickup truck. A prize of $100,000 is to be awarded to the winner of the challenge.

With a file from auto industry reporter Greg Keenan in Toronto 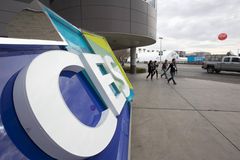