It says a lot about the state of the mid-size sedan market that even after Toyota Camry sales shrank 10 per cent last year in the United States, and 7 per cent in Canada, it was still the segment’s top seller in both countries.

That’s bittersweet for Toyota: it’s nice to be coming from a position of strength as it introduces a new Camry for 2018; but there’s not much prospect of selling a bunch more when family sedans command a shrinking share of an overall market that is expected to stagnate this year.

Of course, Toyota will pursue conquest sales, but that could be a double-edged sword. It’s all well and good if Camry can poach customers from rival sedans like Honda Accord, Ford Fusion and Chevrolet Malibu; less so if customers come back to Camry because they’re vacating the CUV segment at the expense of Toyota’s compact RAV4 and mid-size Highlander models.

The 2018 Camry XSE, left, and the 2018 Camry XLE are introduced during the North American International Auto Show in Detroit. (Mark Blinch/Reuters)

Still, the new Camry was a big enough deal to bring Toyota’s supreme chief, Akio Toyoda, to Detroit to emcee the car’s reveal. Calling it an opportunity to re-energize the mid-size sedan market, he asked, “Why should SUVs get all the glory?”

Although the Camry got stylish new sheet-metal as recently as October 2014, the mechanicals below were still basically the same. The 2018, however, is about as genuinely all-new as any car is these days. Structurally it’s based on Toyota’s new global architecture (TNGA) that we first saw on the 2016 Prius.

The 2015-2017 car was already a looker, but perhaps not “sexy”, which is the word Toyoda used while introducing the new shape. The design was primarily penned by Ian Cartabiano out of Toyota’s California design studio. Whether or not you agree it’s an advance on the current model, it’s certainly a striking advance on any Camry before 2015. All the more so on the sporty SE and XSE trims, which will get 19-inch wheels and distinct styling cues.

Already-generous passenger room should grow further with a wheelbase stretch on a body that is also wider and lower than before; lower seating positions avoid any loss of headroom, while a lower cowl and dashboard preserve or enhance visibility. Toyota also promises a better driving position – closer to the centre of the car and with more steering-wheel height/tilt adjustment.

An original asymmetric dashboard design is intended to create a cockpit-like environment for the driver and an open, airy feel for the front passenger. A 7-inch display audio is standard, 8-inch optional. A 10-inch head-up display is available. 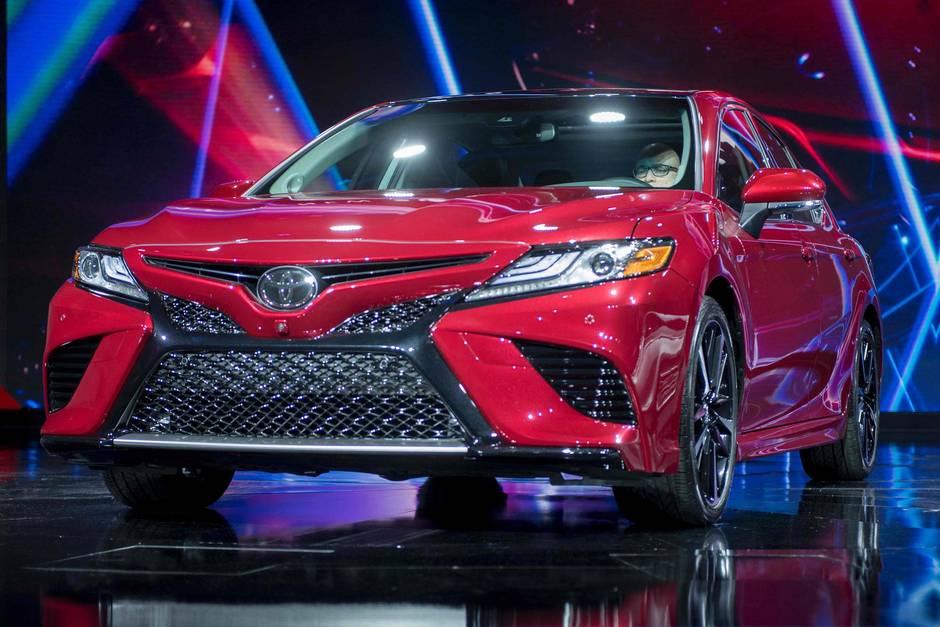 It says a lot about Camry’s new persona that the publicity materials almost say less about infotainment and connectivity features, or active-safety aids (of which there are lots), than it does about “vastly superior” driving dynamics that drivers will notice “within the first few seconds of driving.”

The rigid new structure and double-wishbone rear suspension target the ride-and-handling portfolio, while for the first time in a long time, the powertrains get a makeover. Although displacements are unchanged, the 3.5-litre V-6 and 2.5-litre four-cylinder are both new-generation engines, now hitched to eight-speed (previously six-speed) transmissions; the hybrid will also get a new-generation powertrain.

No numbers yet, but improved power, torque and fuel economy are promised. The V-6 has a D-4S designation like the same-displacement engine in the Lexus IS, which is rated at 306 horsepower.

The 2018 Camry goes on-sale this summer in five trim levels.