Detroit: it's the home turf of the American auto industry. If you can't win on home turf, where can you win? That's why the Detroit auto show every January has always been so important. The Americans have to win big to prove they're contenders.

They always used to win big. The North American International Auto Show was the place to impress the press. New vehicles were a complete surprise until the moment the wraps came off, and their introductions were flashy affairs.

The best at the game was Chrysler, which astonished everyone with riding the Tomahawk V10 motorcycle onstage in 2003, and later driving a Jeep through a sheet of glass, and even driving a herd of cattle down the street in front of the show hall.

Not any more. Everything sobered up with the auto makers' near-bankruptcy in 2008 and it's been more sensible ever since. The new Chrysler – FCA, or Fiat Chrysler Automobiles – isn't even debuting any vehicles at the 2017 show.

Instead, it unveiled a new electric minivan for millennials Tuesday at CES in Las Vegas.

In fact, the focus for auto shows has changed in the last decade. Competition from other shows is stiffer: in North America, the Los Angeles Auto Show in November, CES and the New York International Auto Show in April have all grown into major events, and they're all hungry for new product. As well, the Internet gives an alternative, cheaper venue to flashy debuts.

Mercedes-Benz, for example, has already revealed online its new E-Class coupe, a month ahead of its official debut in Detroit. The auto show will be the first opportunity to touch the car, but we already know everything we need to know from seeing it on the web.

The Detroit show is still a prestigious event, though, calling itself an "epicentre of mobility" this year, and it's still a barometer of the industry.

Next month, General Motors is expected to reveal its new mid-size Chevrolet Traverse and compact GMC Terrain, two SUVs that haven't been properly updated in eight years. The General might even show an updated version of its Z06 Corvette.

Ford hasn't confirmed anything either, but the rumour is that we'll see a cutting-edge 4.8-litre V-8 engine that will power both the top-selling F-150 pickup and the 2018 Mustang.

Its new technology permits "dual injection" – both direct and port fuel – without turbocharging, to improve power and fuel efficiency. Gossip also suggests a new Expedition SUV, or even a Fiesta compact car, might break cover.

But that's it, so far. Nothing too radical. Compare those reveals to what everyone else is bringing to their game:

Lexus and Audi will both introduce new flagship vehicles for their brands. Lexus will debut the fifth generation of the full-size LS sedan (28 years after the first LS was revealed at Detroit), and Audi will debut the all-new full-size Q8 SUV. It's officially a concept, but a production version is expected later in the year as a 2018 model.

Toyota will debut its new Camry, perennially the best-selling car in the United States (now threatened for top sales by the RAV4 SUV). A teaser photo distributed by Toyota suggests the car will be more aggressively styled than before.

Infiniti is revealing a compact crossover, probably to replace the QX50 crossover, based on the Sport Inspiration concept seen at the Paris auto show. Parent company Nissan is also revealing a new product but the rumour mill is quiet on what it might be; the best guess so far is a replacement for the Frontier pickup truck.

Kia will show off its all-new GT sports coupe, finally giving a performance car to the South Korean nameplate. In a release, it says that, "Inspired by a concept, Kia's newest vehicle marries heart-pounding performance with purposeful and progressive design." Well, we'll see soon enough.

BMW has several different editions of the 5 Series sedan to reveal at Detroit, including a plug-in hybrid and an M Performance version.

Honda will introduce its next-generation Odyssey minivan, with updated technology and a sleeker look. Yes, it'll probably keep the vacuum cleaner available in its high-end edition.

Volkswagen will try to move on from its dieselgate scandal to debut a new, longer Tiguan with a third-row seat, for seven passengers, as well as "a multi-functional vehicle for a new era" that is probably an electric-minibus concept.

But, as in previous years, perhaps the greatest attention should be given to the Chinese auto maker that will end the day of OEM revelations on Jan. 9. There's no word yet on what will be shown by GAC, the Guangzhou Automobile Group, whose philosophy is to "Make Excellent Cars for the Loved Ones and Let the World Full of Love."

That might sound cute, but GAC is the fastest growing auto maker in China. By 2020, it plans to produce a million cars a year and export 20 per cent of them. Maybe that's the announcement it will be making next month in Detroit, on the North American industry's home turf. Self-driving cars will drastically change our world, so when does the revolution begin?
November 3, 2016 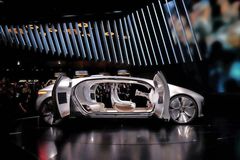