Daorcey Le Bray remembers looking at his Toyota Echo in a downtown condo parking lot in 2009, where he had left it seven months before. He and his partner, Nat, had proved they could live through summer and winter without a car, and now it was time to sell.

Le Bray is one of those millennials who has turned his back on car ownership, perhaps forever. Now, auto makers are scrambling to adapt car design and ownership models to respond to this generation – the first that is not convinced owning an iconic status symbol is worth their while.

Read more: How can I stop my non-driving friends from using me as a free cab?

Related: Why millennials are forcing a shift in the auto industry

Slowly, cities are beginning to reshape themselves, as well. Toronto allowed the construction of its first car-free condo on downtown University Avenue a few years ago. Calgary, meanwhile, followed suit two years ago by approving its first downtown condo with almost no parking spaces. The millennials-driven end-of-car revolution, it seems, had begun.

Planners, however, say it will be a long time before cars disappear from large urban areas. And small towns and rural areas? Maybe never.

One thing everyone can agree on is that cars in crowded city cores are a pain in the butt. The congestion, air-choking gridlock and snail's pace movement frustrates everyone to the point of rage.

So new urbanists have been working on ways to have fewer cars in the core. One of the leading cities is Lyon, France, where over the next decade car use is projected to drop by 20 per cent while the population grows by 10. Helsinki, meanwhile, hopes to have a "mobility on demand" public transit system in place by 2025 that would make car ownership almost pointless.

That's fine for dense urban cores, says Klaus Lehmann, a City of Toronto parking planner. "But it will likely only ever be in downtowns, where there is a high incidence of public transportation."

Lehmann notes the ability to live without a car depends on proximity to public transit, shopping and work. Research shows the further one lives from downtown, the higher the car ownership rate.

Le Bray remembers growing up in rural Alberta where, like his peers, he got his licence as soon as he could. Now, living close to downtown amenities makes a car-free existence possible. When he and his partner want to go further afield, they use rental cars, car-sharing, Uber or taxis, but still believe they are financially ahead.

"It's not part of our balance sheet," he says. "You save a ton of money by not owning a car."

A car-free life is not so easy in North American suburbs, which have been built around the automobile. Winding cul-de-sacs feature homes with front-car garages and few services or transit stops within walking distance. Even if everyone agreed to undo that design, "That's not going to happen in the suburbs, not for a long, long time," says Rollin Stanley, Calgary's general manager of planning.

The failure of Toyota's Scion brand, aimed at millennium buyers (ages 21-38), was taken as a sign of the emergence of the "sharing economy" in which future generations might never buy a car. Car makers such as General Motors and Ford decided to hedge their bets by buying the Lyft and Chariot car-sharing services. GM also started the Maven ride-sharing service, which aims to make car-sharing "experiential."

But Joni Paiva, president of Nissan Canada, says not all millennials want, or will use, ride-sharing: "I don't think you can generalize that way."

Paiva says his company believes millennials will buy cars – if auto makers listen carefully to them. "We are looking at how to engage millennials much sooner in the car development process," he says. That input will help companies more rapidly "evolve" cars to incorporate desired features, such as advanced connectivity.

Recent research suggests most millennials actually want to buy cars, but are delaying their investment (just as they are delaying marriage and home ownership) while they juggle debts on low early-career incomes. In 2016, J.D. Power's Power Information Network reported an upsurge in millennial car purchases in the United States – four million in 2015, bringing millennials' share of the market to a record high 28 per cent.

Car ownership in the United States hit a peak in 2006 (just over two cars per household) and fell to 1.27 vehicles per household in 2013, according to research by the University of Michigan's Sustainable Worldwide Transportation research group. Rates began to rebound in 2015, when it bounced up to 1.95 per household.

Those trends will continue as long as fuel is relatively cheap and it's still relatively easy to get around by car, says Stanley. Cities, meanwhile, are encouraging mixed-use centres in suburbs, so the need for motor trips becomes less frequent.

He says North American cities remain fundamentally different from cities like Helsinki, where ultra-high density and elaborate public transit makes going car-free feasible. Here, "there will always be a demand for cars."

Lehmann sees Toronto's car-less condo as a "one-off," rather than a bellwether. The city still requires 0.5 parking spaces be provided for every condo unit. "We're still a society that's founded around the vehicle. I don't believe that's going to disappear."

Le Bray agrees with that assessment. "We haven't given up on cars," he says. "We've just given up on owning car."

Can motorists tolerate cyclists and share the road?
March 1, 2017
How we’ll get around in the future
March 1, 2017
Car-sharing is finally growing up, providing luxury options
January 30, 2017 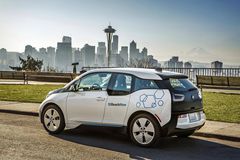 Urban dwellers go car-free and carefree
February 15, 2017
Follow us on Twitter @globedrive Opens in a new window
Report an error Editorial code of conduct
Due to technical reasons, we have temporarily removed commenting from our articles. We hope to have this fixed soon. Thank you for your patience. If you are looking to give feedback on our new site, please send it along to feedback@globeandmail.com. If you want to write a letter to the editor, please forward to letters@globeandmail.com.
Comments