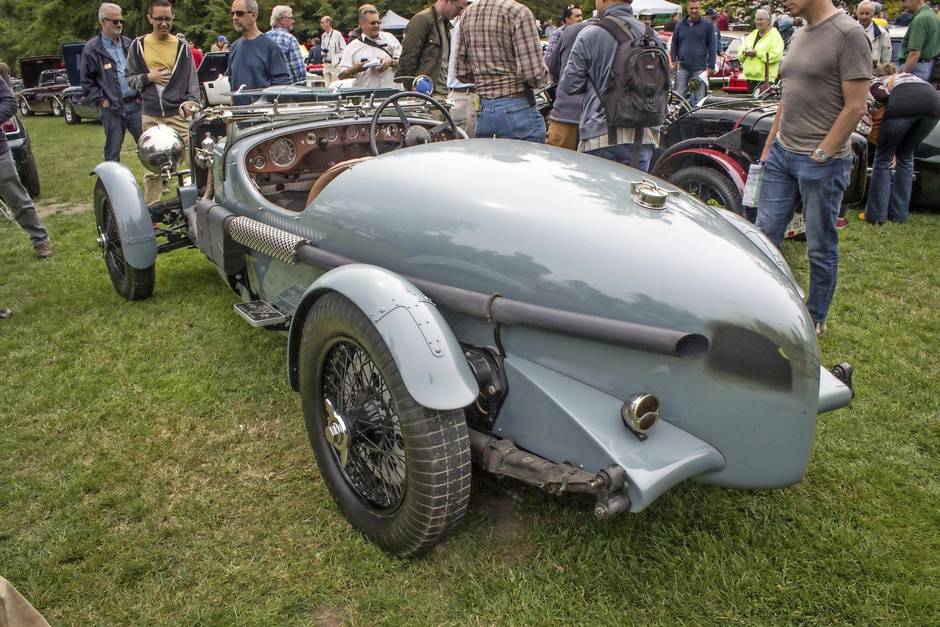 Imagine you purchased a toaster and brought it home to find that it burned the bread. You’d probably return it to the store, right? Not if you were a classic British car enthusiast.

No. If such were the case, you’d exclaim that it just needed adjustment and gleefully scurry to the shed to disappear with your toolkit for a couple of hours. You’d return with a toaster that makes perfect golden toast 60 per cent of the time, burnt toast 30 per cent of the time and 10 per cent of the time ejects the toast so hard it wedges into the ceiling. Also, in defiance of logic and reason, your toaster now leaks oil all over the counter – but it works! Sort of! Partially! Most of the time! Being a British car enthusiast is not for everyone. It requires patience, mechanical sympathy, stoicism in the face of great odds, and a mild tendency toward lunacy and/or masochism.

However, Vancouver’s annual All-British Field Meet (ABFM) is for everyone. 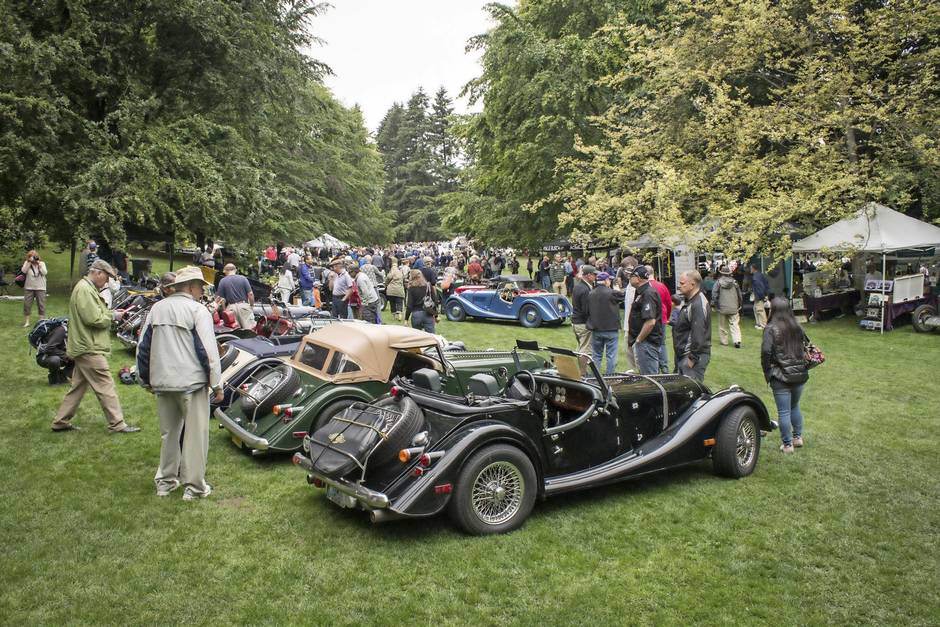 It is an open and welcoming event allowing the casual observer to experience classic British steel in its natural repose: parked, with the bonnet up.

This, the 31st year of the event, was no exception, with more than a hundred examples of the best of British scattered like liquorice allsorts across the delicately manicured lawns of the Van Dusen Gardens. Step from the bustle of Saturday afternoon city traffic into a lush green paradise, and feast your eyes on probably the most varied selection of cars you’d see this side of Pebble Beach.

But where Pebble Beach can be layered in entitlement and self-congratulatory wealth, the ABFM is just a bunch of people standing around discussing the minutiae of their quirky cars and making jokes about Lucas, Prince of Darkness. As I watch, a huddle clusters around a flawless ebony XK140. 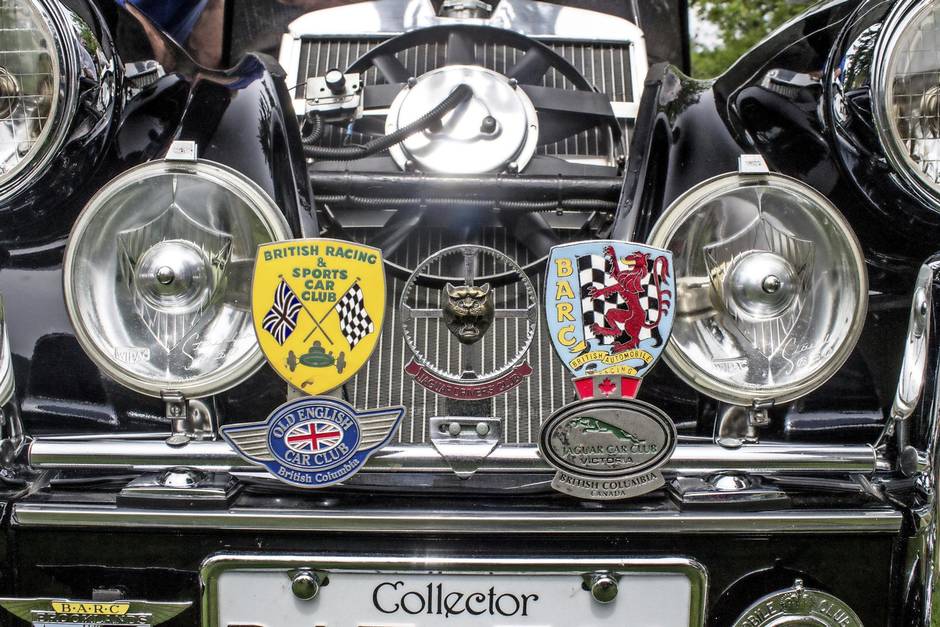 “How’ve you managed to get that to sit flush?” one asks, gesturing at the oil-cap on the Jag’s straight-six. “Can I have a look at your gasket?”

“That’s a rather personal question,” an onlooker jokes.

But the owner is only too happy to unscrew the cap and show off his hand-turned seal, angled to get the detail right. Eyeglasses are pushed back on foreheads as the Jaguar enthusiasts crowd around.

The XK is perfection, and correct, but the ABFM also makes room for imagination. Parked near a three-wheeled Morgan with a rear-mounted spare-wheel fantastically incorporated into its streamlined bodywork is Oliver Young’s 1937 Alvis Speed 25. 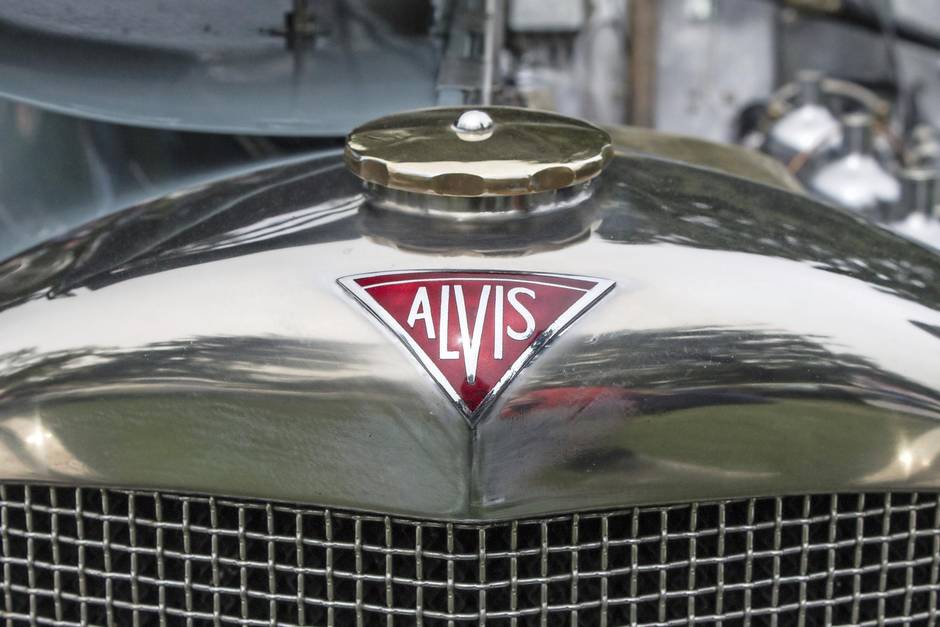 “It started out as a sketch,” RX Autowork’s Rob Fram says. “Everything’s hand-formed, from the fenders to the bellypan.”

Starting life as a large four-doored luxury saloon car, Young’s custom-bodied machine pays homage to the racing machines of Brooklands. RX, a small company based out of North Vancouver, B.C., has won awards at Pebble Beach and Villa d’Este for its detailed and authentic restorations. Here, instead of restoring the past, they’ve produced their own unique rolling artwork. And it’s meant to be used: The pale blue paint is marred at the rear by soot and heat from the curved exhaust pipe, and there’s a hammer under the hood. 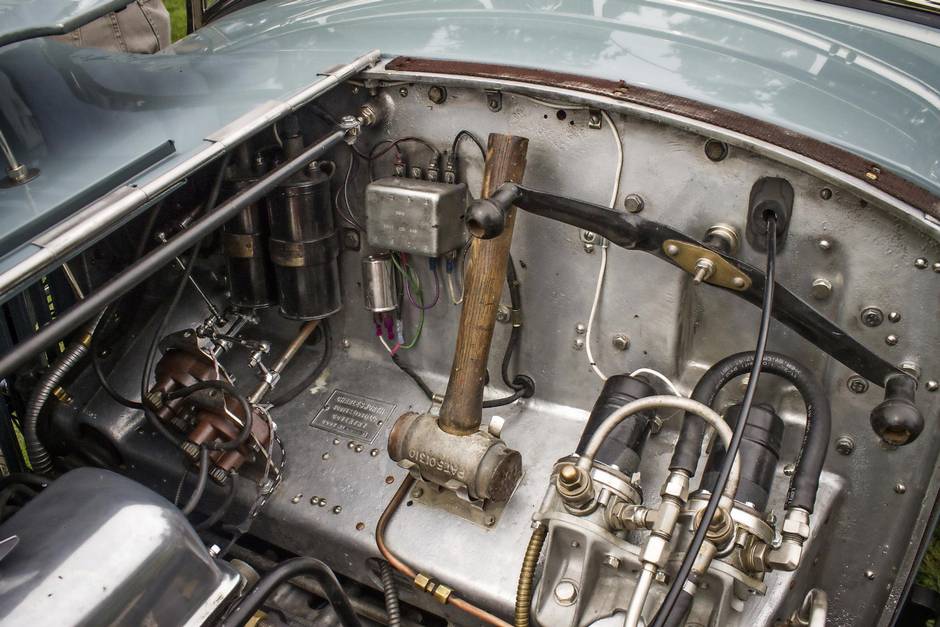 “It’s theoretically for the knock-offs,” Fram says with a grin. “But it is mounted conveniently close to the carburetors.”

While there are silver-haired ex-pats in abundance – those who grew up in, around, and often underneath these cars – the cross-section of owners showing their cars today is widely varied. Helen Poon, a young woman in her 20s, has brought along her 1937 Rolls-Royce 25/30 with coachwork by Thrupp and Maberly. Essentially unrestored, it was used in the wedding of the son of former British prime minister Clement Attlee. She’s also backdating a 1999 Mini to Mk I spec.

Not far away is Harjeet Kalsi’s outrageous turquoise 1982 Aston-Martin Lagonda. The soft-spoken Kalsi seems at odds with the searing paint and wild styling of his Aston, but he’s the ideal owner for it: An electrical engineer who doesn’t mind getting his hands dirty. 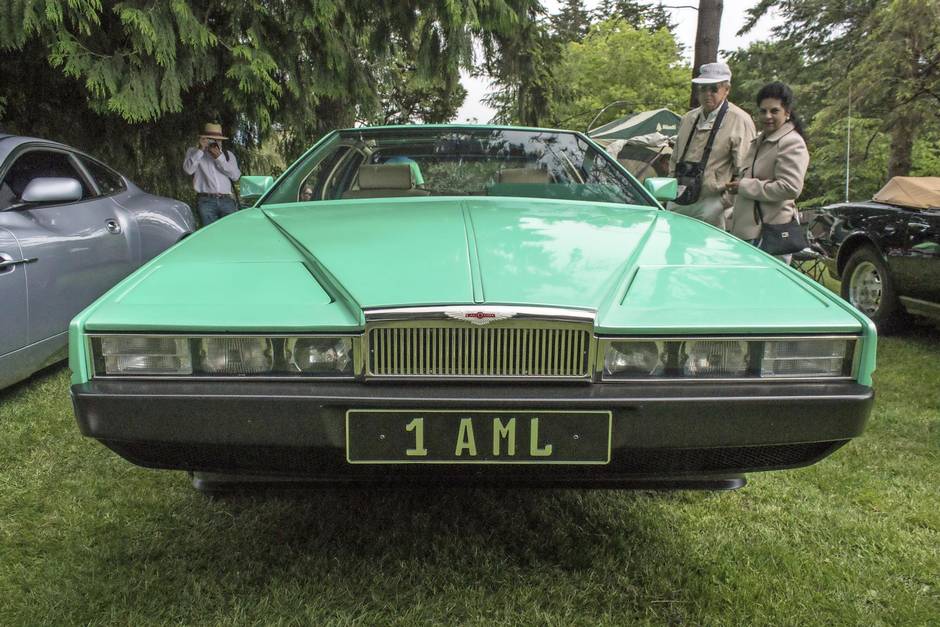 A squadron of Land Rovers stand sentinel on a hill, a mix of newish grey-market imports and originals. Some are kitted out in British Army camouflage with their owners dressed up in fatigues and berets to complete the scene. Cardboard cutouts of Mr. Bean and the Queen peer from the flap of a roof-mounted tent. 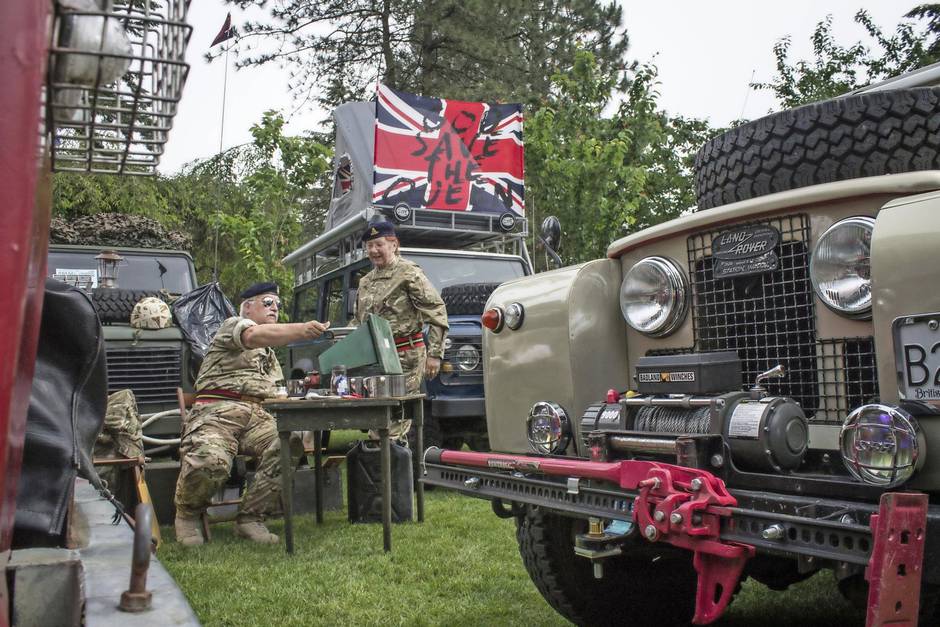 Among the group is the Grizzly Torque, the 1957 Land Rover ambulance used by wildlife artist Robert Bateman and his friend Bristol Foster to drive halfway around the world in the 1950s. It’s been freshly restored, including the reapplication by Bateman of the murals that he originally painted on the car as the pair travelled. Two jerrycans are mounted on the front of the Landie, one marked Gin and the other Tonic. 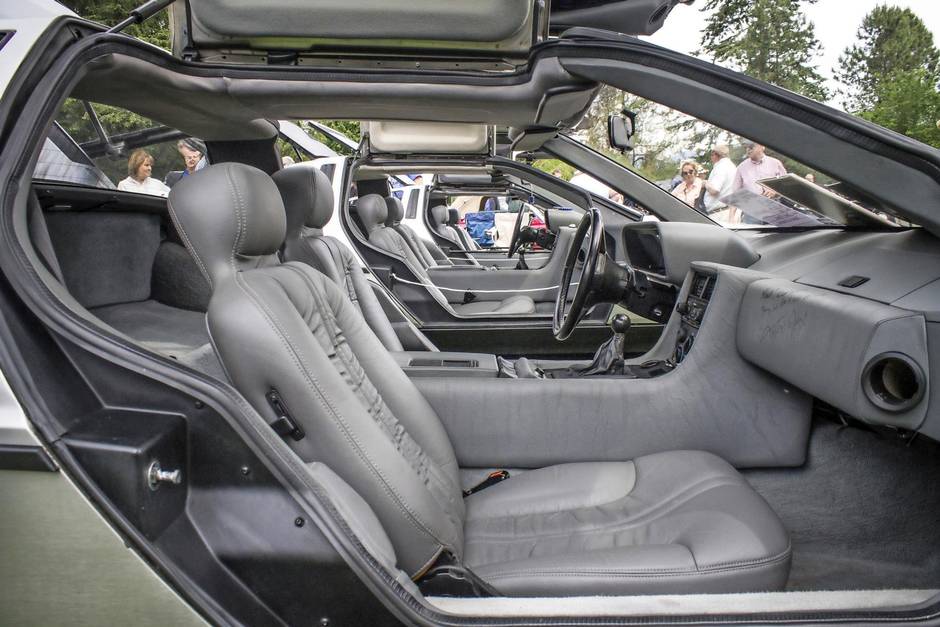 A green Bedford van sleeps under a spreading fir tree. Three DeLorean DMC-12s sit with their gullwings raised in that iconic silhouette. A gang of Norton and Triumph motorcycles cluster together like cafe racers after a hard run. People picnic among their cars as a brass band plays, “It’s a long way to Tipperary.” The sun even threatens to come out.

To patience and mechanical know-how, we can add a sense of humour and the feeling of community. Old British cars are not appliances; they are characterful and charming and demanding.

The modern car asks little from its owners. Automatic transmissions shift themselves. Sensors help us park and watch our blind spots. Soon, we are told, our cars will even drive themselves.

But classic British metal needs you. It needs you to listen for funny noises, to know how to tinker, to want to spend time under the bonnet, rummaging around and getting oily. It’s not a life for everyone, but everyone can understand the appeal. Now, let me fetch a ladder: My toast is ready. 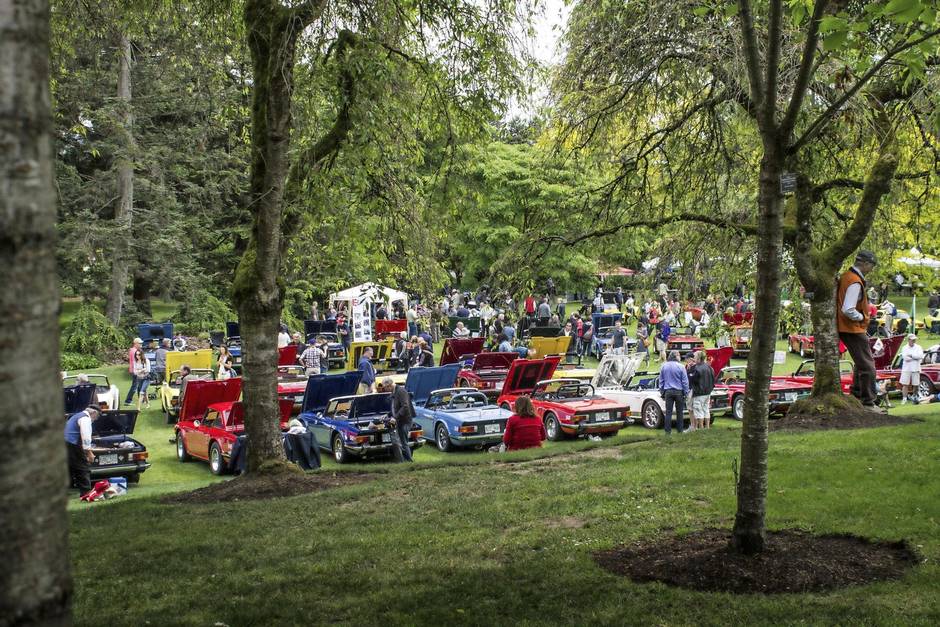