Standing here, at the longitudinal centre of Canada, just east of Winnipeg, you still feel them. 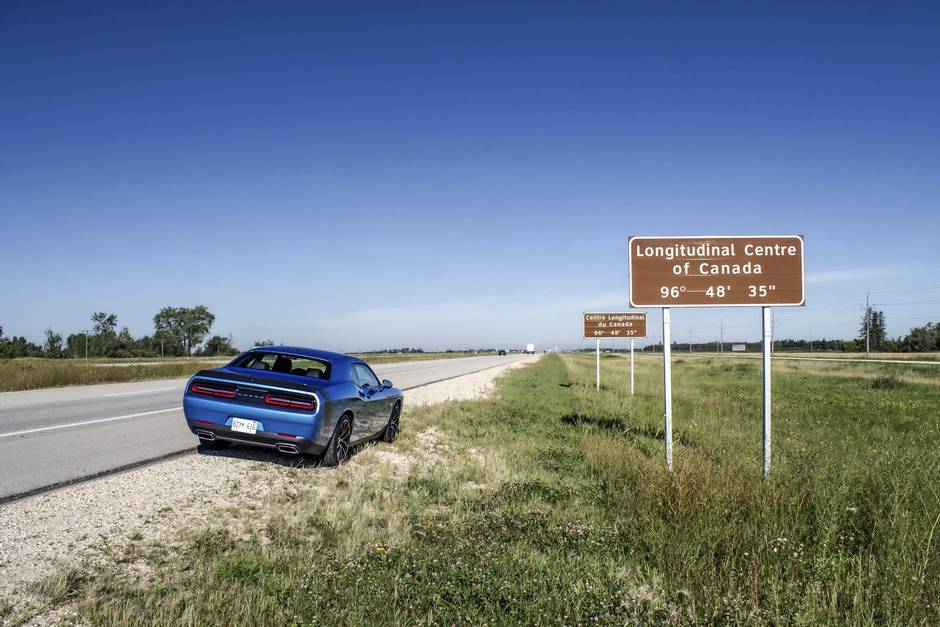 Traffic rushes past in both directions, trekking west or east across our vast country. Six time zones. 8,000 kilometres. Ten provinces stretched out over rocky coasts and mountains and deserts and prairies. The Trans-Canada highway serves as a tarmac umbilical cord, for most of us an answer to the question – what connects us as Canadians? One reply: the music of The Tragically Hip, Canada's unofficial band. 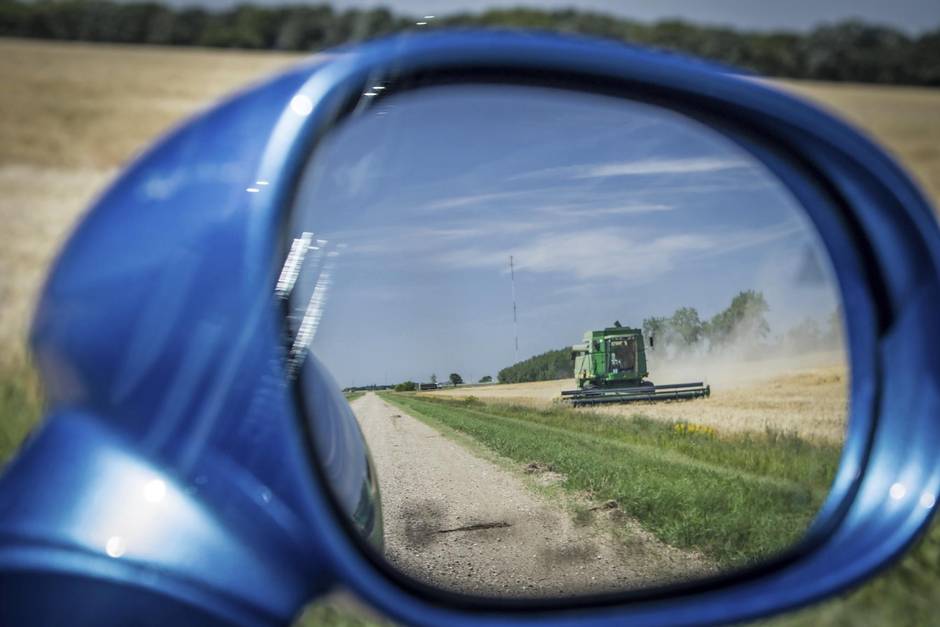 Time for an eight-cylinder-powered tribute.

This powder blue Dodge Challenger is ideal for the mission at hand. One, it's ridiculously enormous – just like Canada. Two, everybody thinks it's American – but the car's actually built in Brampton, Ont. Three, this one happens to have an engine worthy of an angry bull moose: a 6.4-litre V-8 firing out 485 horsepower and 475 lb-ft of torque through a six-speed manual to the rear wheels. It's not exactly a cornering machine, but the prairies are a place of straight lines and right angles. 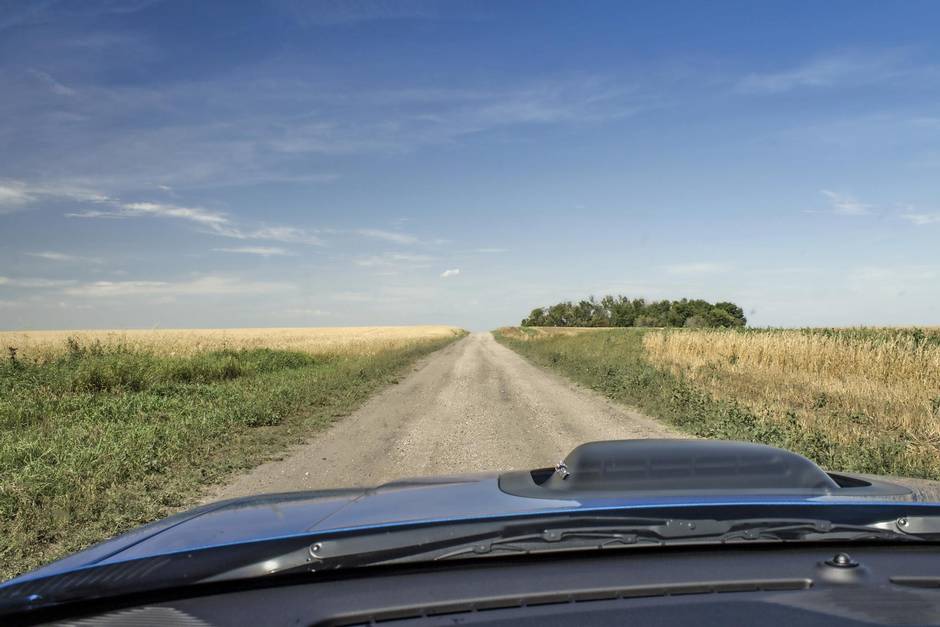 I'll drive several hours west towards Brandon, hurtling across the flatlands toward the 100th meridian, a place made famous by the Hip's eponymous song.

“Lower me slowly and sadly and properly; get Ry Cooder to sing my eulogy.”

My plan is to find some nameless back road, lower the windows, and turn up the radio.

The Dodge scrawls a smoky rubber signature on the tarmac (in both official languages, naturally) as it lunges to highway speed. The long hood, with that power bulge punched through, straightens out toward the flat, endless horizon and the V-8 starts chewing up the miles -- relentless, thunderous.

Related: McAleer's journey as it unfolded on social media

Who can say how many road trips have been kicked off by a Tragically Hip song? The opening riff of Little Bones drives your right foot down; the wistful melancholy of Ahead By A Century eases it off again. As we flow into Winnipeg's traffic, the Dodge's stereo comes alive with Grace, Too, a song that often starts a live set for the Hip.

When the story of his terminal cancer broke, the nation reeled. Since 1987, the Hip has woven themselves into the national conscious, an ever-present band that expanded to fill our borders without overspilling them. It was better for us that the Americans didn't understand – they were ours. 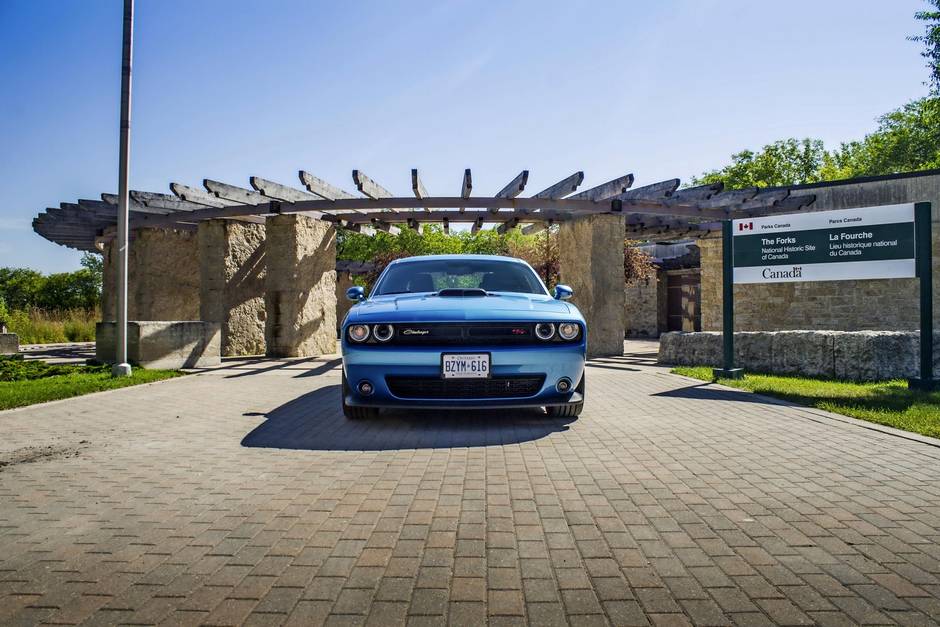 I pull in to the Forks, at the confluence of the Red and Assiniboine rivers. Winnipeg was the first Paris of the Prairies, a place where so many came to start new lives, seeding the fertile earth with labour, and harvesting wheat. Some one-fifth of the Icelandic population settled north of here in Gimli, fleeing a volcanic eruption. It remains the largest Icelandic population outside of Iceland itself.

That's Canada, a refuge for some, a rangy old homestead for others. It's a broad patchwork quilt of a place, a thousand scattered communities sewn together into a whole without losing their identities.

The Dodge noses its way out of town, squeezing along through the everyday pickups and subcompacts, rumbling like a little volcanic activity wouldn't be totally out of the question. I pass a go-kart track just as the first notes of Blow At High Dough come on. It'll do as a makeshift speedway to mark the way. 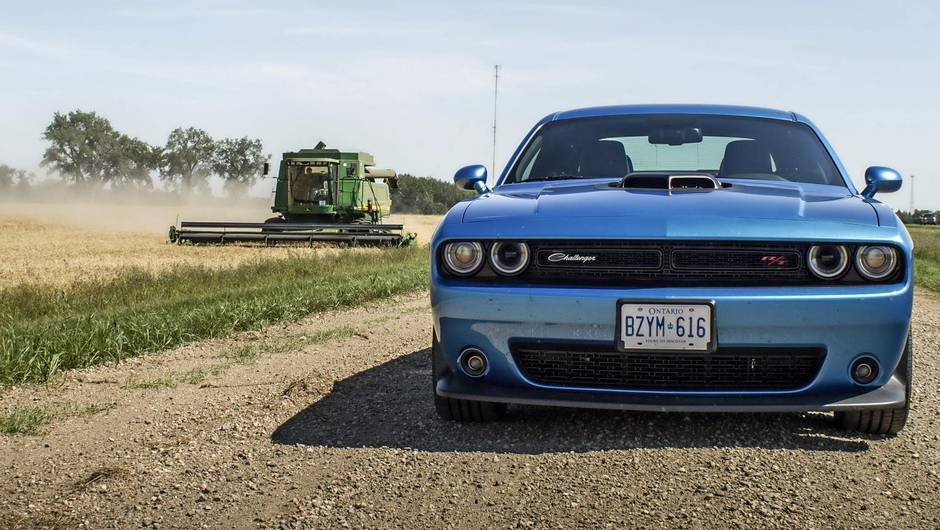 The road opens, and the Challenger awakes, lashing out with machine-revving tension. This is prairie thunder, bottled up in blue sheet metal. We pass combine harvesters working, hunching along through golden fields like giant green aphids.

The prairies are flat, true, but there's a form and beauty to them. 50 Mission Cap plays as I pass a sign commemorating the highway to Manitoba's fallen soldiers. You can trace a line right across the country with the places the Hip have sung about: small places in a big land, Bobcaygeon to Lake Fever. 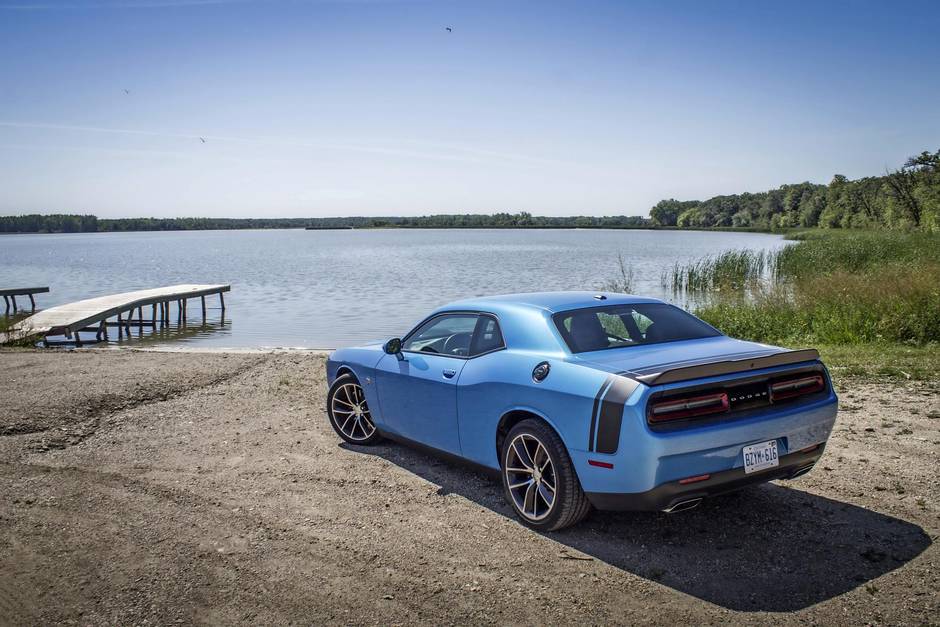 A detour just before Brandon brings us down to the Canadian Artillery Museum. The guard at the gate gives the car the thumbs up, and I briefly park the Challenger next to a howitzer, which seems fitting. Then it's on into the city's centre and a stop at the arena where the local WHL hockey team plays. They're called the Wheat Kings. 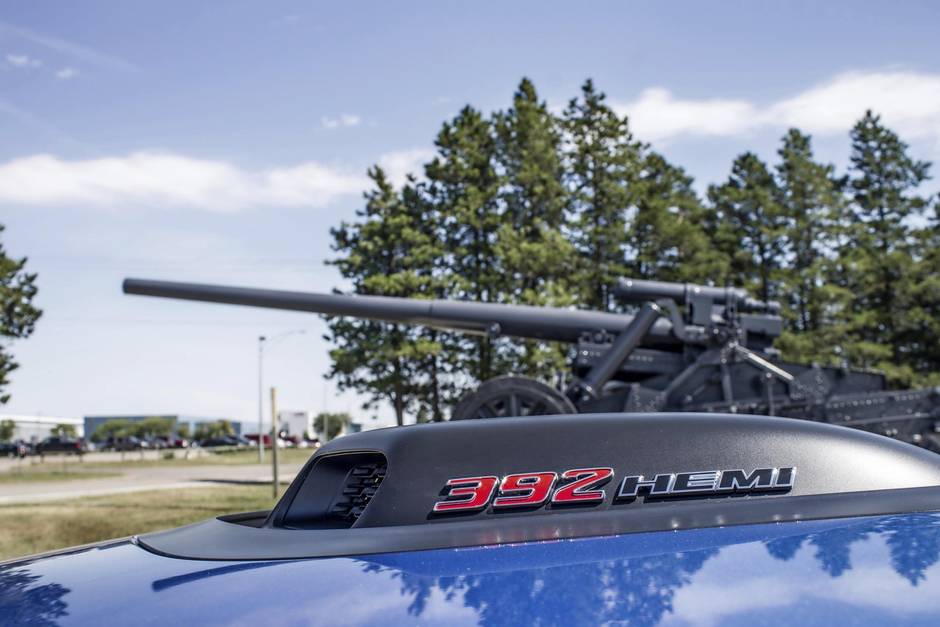 A quick fill at a Husky station (“Put 10 bucks in and just get the tank topped off” - Locked In The Trunk of a Car), and it's time to head north of the city, into the farmland. I plotted these roads out earlier, and you could mark the point where the Google mapping car turned around in despair and boredom. Driving down a corduroy road, I press further on.

And then we're there. The compass reads 100° 00' 00”W, the Dodge crunches to a stop, and I shut the engine off. Whispering zephyrs chase each other across the fields, but the only other sound is that of crickets in the long grass. I open the doors and let the melancholy slide guitar of Ry Cooder's Paris, Texas float out. 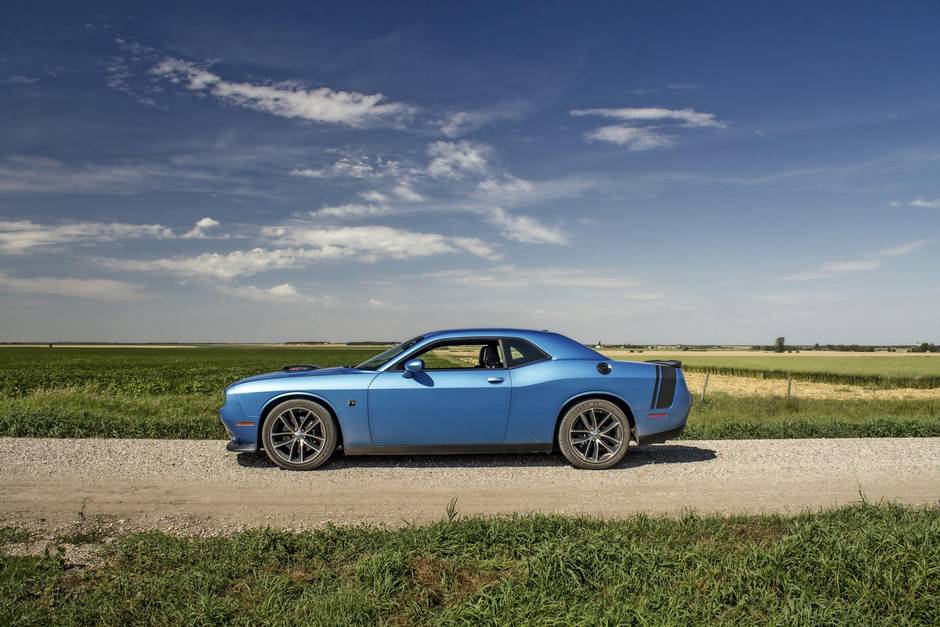 But a slow eulogy isn't right. I imagine Gord receiving that crushing diagnosis, the pain of having his skull cut open and pieces of his brain carved out, radiation, chemotherapy – steroids to control the swelling of his brain. He could have excused himself from public view, withdrawn into privacy to wait for an ending.

After all his music has done for Canada, Gord Downie and the Hip have one more lesson with us. I turn to the East. Out there, 1,000 km away, Terry Fox ran his last mile doing much the same thing. In the face of death, both men chose to live as fiercely as they could.

I fire up the Challenger, open both doors, crank the stereo as high as she'll go. One thing yet to do.

“Courage!” Gord cries out, his voice a mix of defiant roar and wail, “My word!” 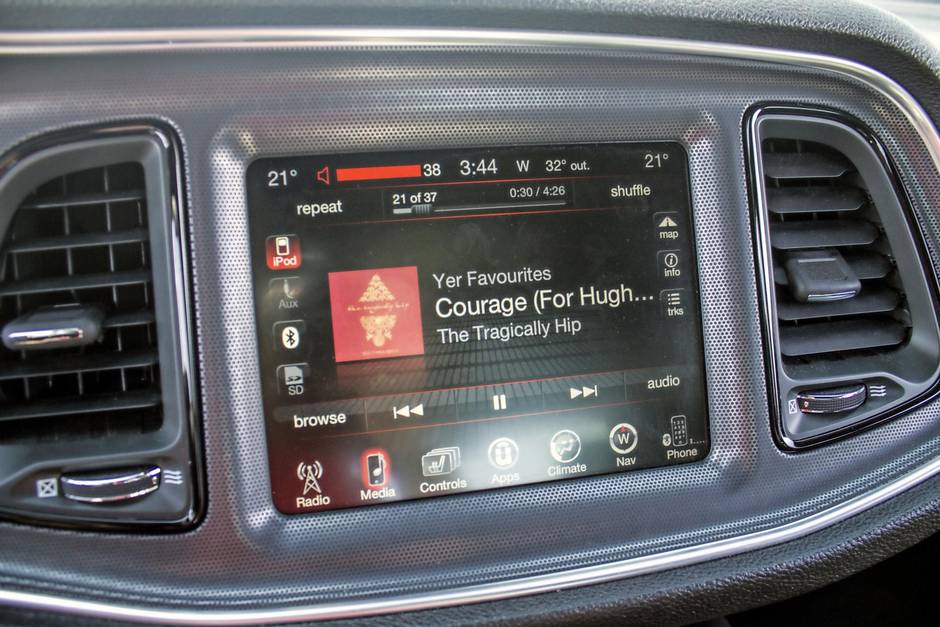 The song streams out, louder than any prairie storm, louder than any howling V-8. The land drinks it in like rain. Four and a half minutes of hackle-raising joy and fury, and then silence, save for the rumbling of the car and the wind in the wheat.

And yet, if I listen closely, I can hear the echo endlessly repeating out there, rolling out to fill this huge country. From coast to coast. From the Arctic to the 49th parallel. And here, in the heart of Canada. 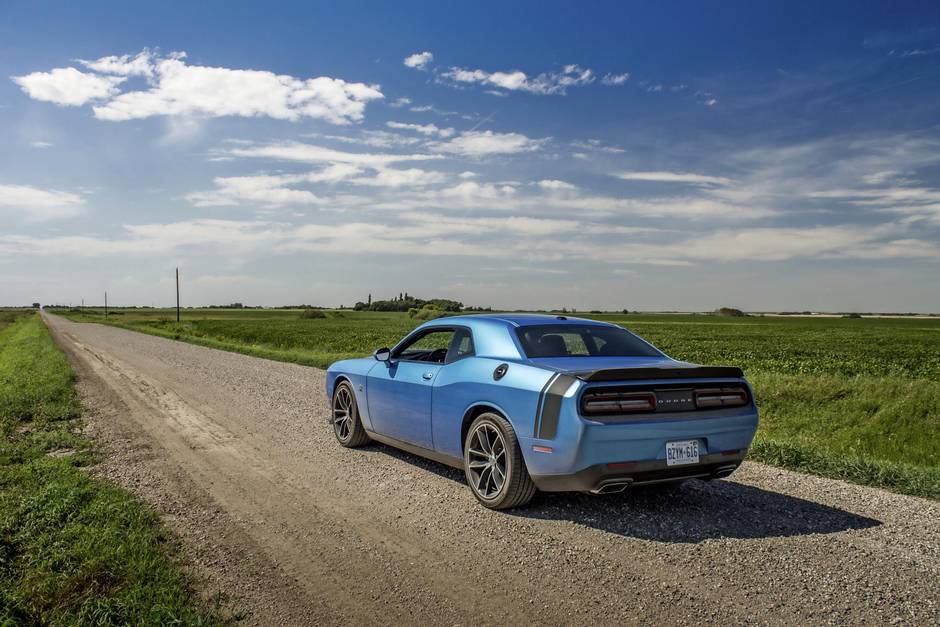 Where the great plains begin. 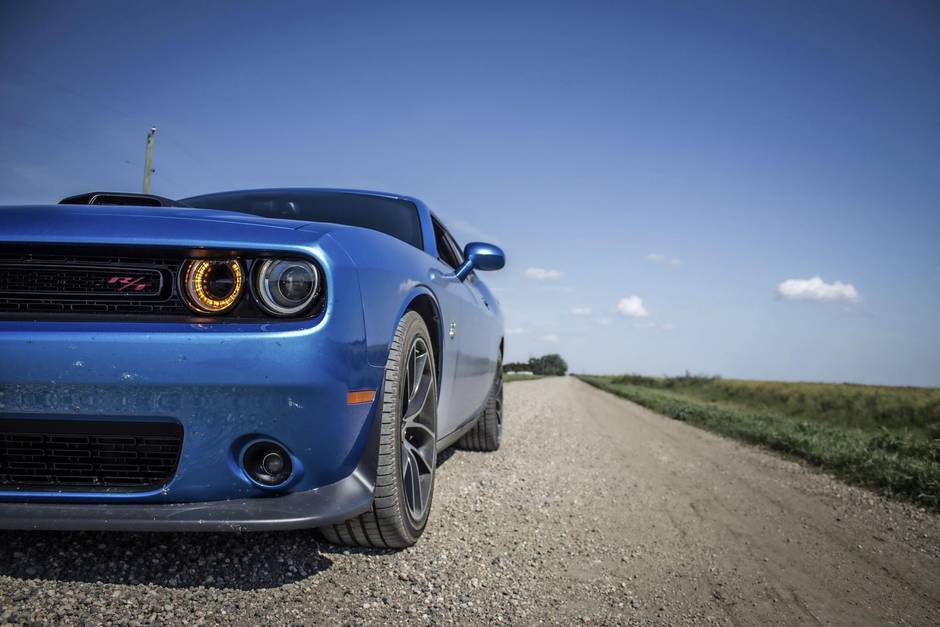