The streets no longer belong to cars. The sooner drivers accept it, the sooner we can all start making our commutes less painful.

Streets take up almost one quarter of Toronto's total land area, according to the city. Stretched end-to-end, Toronto's 5,600 kilometres of road would reach across the Atlantic Ocean coming up just short of London, England.

Streets represent a massive chunk of the space around us, but we're as bad at sharing them as a bunch of kids with a lone iPad.

Nothing is more infuriating while driving than trying to turn right when – out of nowhere and in total silence – a cyclist zips past between the car and curb, the ninja-like rider exploiting a gap barely wider than a door mirror. During rush hour, drivers can be stuck waiting the length of a green light before the cyclists are done riding past in the bicycle lane. And when you can finally turn right to get out of the way, the light is red for the long line of cars that has built up behind. Who has the right of way? Should the car move over to close the gap? There has to be a better way.

As a cyclist, there's nothing worse than having a driver honk at you. A horn sounds like a muted chime from inside the safe steel cocoon of a car's cabin. Outside, on a bike, it's a piercing electric jolt, an air-raid siren in your ear, a call to arms. On a bike you can feel the ire of a driver behind you, fuming. When there's finally enough space to pass – and sometimes when there isn't – the driver roars past flat out like an Indy 500 driver when the flag has just been dropped.

I'm as guilty as anyone. I drive and bike daily. You'd think that would give me some sympathy for the other side, a sense of patience and respect for other road users. But too often it doesn't. When I'm driving I feel like the road belongs to me.

The problem is drivers have ruled the roads since the horse and buggy was banned.

When the Toronto Bypass – later renamed Highway 401 – was built in the 1940s and 1950s it was in the middle of nowhere, surrounded by green fields.

"Within 10 years, motorists will be able to drive from Windsor to the Quebec border without passing a built-up area," the Globe and Mail wrote on the front page of its July 9, 1954, issue.

You have to wonder if city planners back then could have ever even imagined what the city would look like in the new millennium. The city and its suburbs have long since swallowed up and sprawled past the 401. During morning and afternoon rush hour, every one of the highway's eight or 12 lanes are bumper-to-bumper. It's the same story in all major cities across Canada.

It's like nobody ever imagined a time when a car might not always be the best way to get around, and when the roads might get full and there would be no space to build more.

"The hidden costs of congestion are between $500-million and $1.2-billion a year for the Metro Vancouver area," according a C.D. Howe Institute report from last year.

Lost productivity due to traffic congestion in the Toronto region costs the country $3.3-billion annually, according to a 2009 study by the Organization for Economic Co-operation and Development (OECD). "Seventy-one per cent of commuters [are] still dependent on the automobile – one of the highest rates of car use among cities in the organization's 30 member countries," the Globe and Mail reported.

Forget the financial incentives. Wouldn't you like to have those two or three hours of daily commuting time back?

But for many in the suburbs or in areas poorly served by public transit, driving is the only viable way to get to and from work, or to get groceries, or take children to school. That's not going to change in the near future.

The truth is there's no immediate solution to traffic congestion. We can wait for trillion-dollar infrastructure projects to get completed. We can wait for a new subway line or bike lane. We can wait for autonomous cars to make better use of the available road space. But until then, we're going to have to learn to better share the space we've got.

"While not every type of use or user may be accommodated on every street, the goal is to build a city with a well-functioning street network that supports and sustains our quality of life in Toronto." This is a quote from the city's Complete Streets policy, but you'd never know it out on the street where drivers are still considered King of the Road.

Instead of resenting the fact we have to share what was once our sole domain, our kingdom, we should embrace it. The point is to get people moving more efficiently, even if that just means not honking at a cyclist or letting a car make a right turn. Sometimes you'll win, and sometimes you'll lose. But, on average, we should all get where we're going a little faster, and with less anguish. 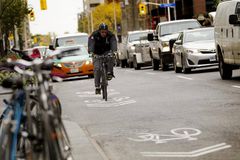 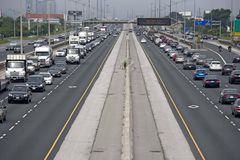