If one is to survive driving the roads of the Yucatan, one must learn to handle a series of curveballs, knuckleballs and spitballs that would baffle even the most seasoned major league hitter.

Nothing, or at least little, resembles driving in Canada – or most other countries, for that matter.

There are stop signs that don’t always mean stop, one-way streets that may or may not be one-way and road signs that make little sense no matter how high your level of Spanish fluency. There are streets filled with slow-moving vehicles and sleeping animals, who may or may not give you the right of way.

In photos: A scenic and confusing drive through the Yucatan

But amid all of that, there is one aspect of driving in Mexico that must be mastered or all hope is lost: the tope. Failure to respect, and even fear, the tope can be disastrous. The tope (pronounced toe-pay) is basically a speed bump. But any resemblance between a Canadian speed bump and a Yucatecan tope is purely coincidental. The Canadian version is designed to slow traffic. It is usually well-marked, almost always painted a contrasting colour to the road and located in places where drivers tend to expect them.

The evil tope: Note the scars 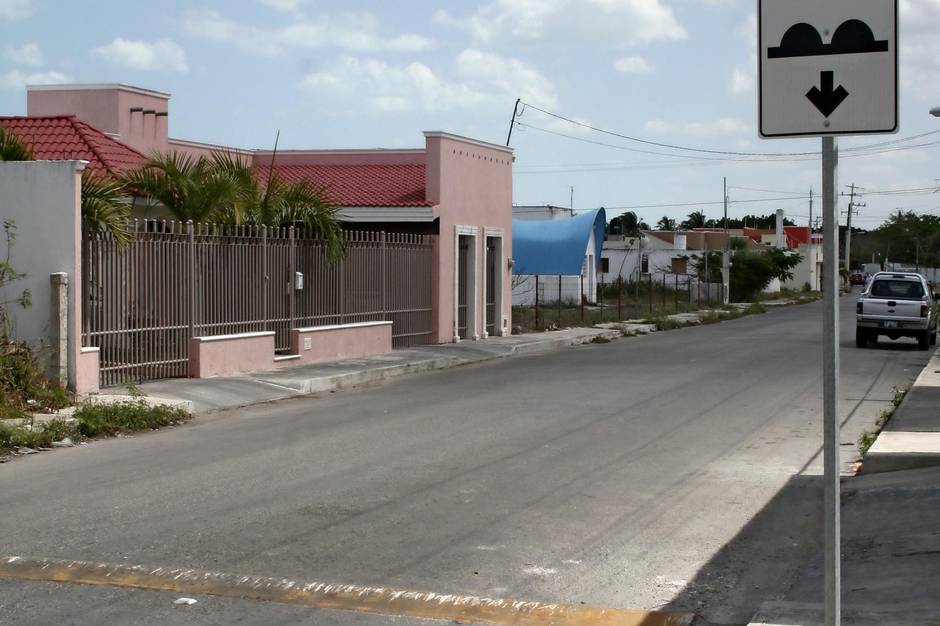 In the Yucatan, the tope is intended not to slow traffic but to stop it. It takes on many forms: from a gently sloped bump to a miniature barrier designed to send cars hurtling through the air and back-seat passengers into the roof. It is often unpainted, blending in perfectly with the road surface and, far too often, not accompanied by any signs.

They are, in a word, diabolical. One almost suspects they were installed, not by the roads department, but by car repair firms looking to stir up business.

Most are covered in scars left by car undercarriages, oil pans and axles. Thousands of cars carry the reminders of the unintended unions on their nether regions.

This knowledge, gained through years of driving during frequent winter stays in Mexico, proved invaluable on a March road trip that took us from the mangroves of San Crisanto on the Gulf of Mexico to the spectacular Mayan ruins at Uxmal, a return trip of 300 kilometres over some of the most treacherous topes in the state.

The Venice of the Yucatan, sort of

As we are hiding from the Canadian winter on the Gulf coast nearby, we decide to drive our rented Chevy Matiz – the Mexican version of the Spark – 36 kilometres along Highway 27 to the pretty fishing village of San Crisanto, population 700.

Miguel poles his way through the mangroves

The attraction is a mangrove tour, run by local fishermen who used machetes to hack out a series of canals leading to a spring called a cenote (seh-noh-tay). Getting there requires negotiating several topes on the two-lane highway, two police checkpoints and what may or may not have been a large snake on the road.

On arrival, a friendly fisherman named Miguel leads us on his bicycle to the place where he’d moored his rowboat. Following him on a bike might have been a better idea than the Matiz, which is bouncing like an Indian rubber ball on the unpaved road to the mangroves.

But it’s worth the bone-rattling trip. An hour later, after seeing such wonders as a kingfisher actually fishing, and drinking in the sheer peace of the place, we’re back on the road heading west toward Uxmal.

Flamingos are as common in the Yucatan as sparrows in Canada 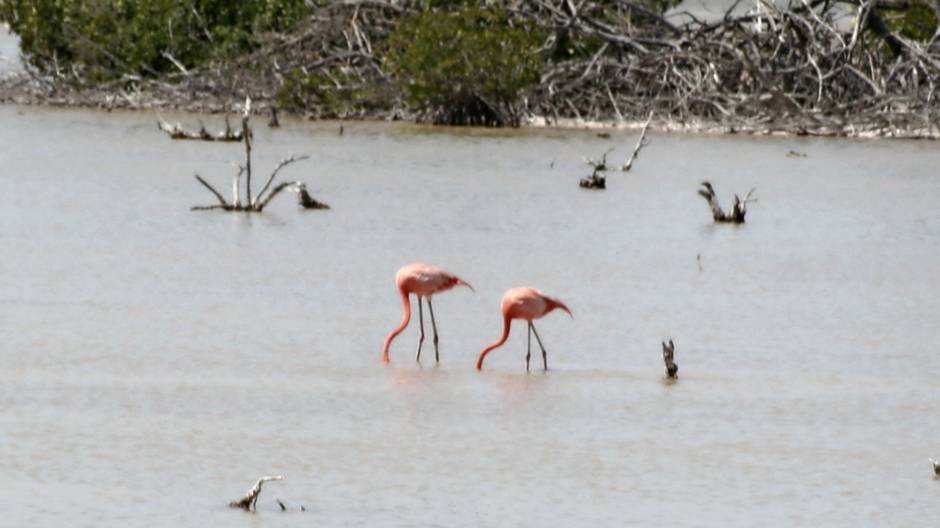 We stop for a quick snack – a delicious Lebanese-Mexican patty of ground meat and bulgur called kibi – and continue past a string of inviting beachfront villas on La Costa Esmeralda (Emerald Coast), stopping only to watch flamingos feeding in a roadside swamp.

Why didn't the asteroid destroy topes, too?

More topes, including some diabolical-looking steel ones, are negotiated as we enter Chicxulub. Most of the world knows the name of this non-descript fishing village for being Ground Zero for the asteroid that destroyed the dinosaurs, but it is locally renowned for its frequent and, at times, soul-destroying topes.

We survive the worst of them and stop in at a local market, where my wife buys a couple of hand-made Mayan blouses made in Chiapas state ($15 each) while I sample more kibis.

A few kilometres and a few more topes down the road is the port town of Progreso, which fills up with Canadian snowbirds in the winter and people trying to escape the oppressive heat in the nearby city of Merida in summer. On this day, its main attraction is its Pemex station, where attendants still clean your windows while filling your gas tank.

Expressway driving, with an asterisk

From Progreso, we negotiate our way around some serious road construction and more topes to enter Highway 261, a six-lane behemoth worthy of any Canadian metropolis.

But we are quickly reminded that we aren’t in any Canadian metropolis, unless Canadian mothers routinely try to cross three lanes of high-speed traffic while pedalling a bicycle cart holding four children.

Uxmal is a major tourist attraction, so naturally there are no signs directing tourists there. But having mapped our route in advance, we know we’re looking for the exit to Campeche and Uman. We stick to our guns and soon see the elusive sign to Uxmal.

Not long after, we come to one of the great mysteries of driving on Mexico’s high-speed routes. In the middle of a six-lane expressway, we are suddenly confronted by a hexagonal red “Alto” (stop) sign.

Anyone attempting to obey such a sign will likely end up as a hood ornament on the vehicle behind them. In this case, the Alto applies only if there’s a train on the tracks, which happens once a decade.

The same goes for the “Alto” signs on expressway ramps. They’re really yield signs, though why the word for stop is used is something apparently as mysterious as the fall of the Mayan empire.

But there are no signs to tell us that and no signs directing us to Uxmal. As we head in the wrong direction, we take advantage of a great Mexican road innovation called the Retorno – basically a U-turn lane. We turn around a kilometre later and head north to find that the southbound exit to Uxmal isn’t closed.

Entrance to the hacienda at Yaxcopoil 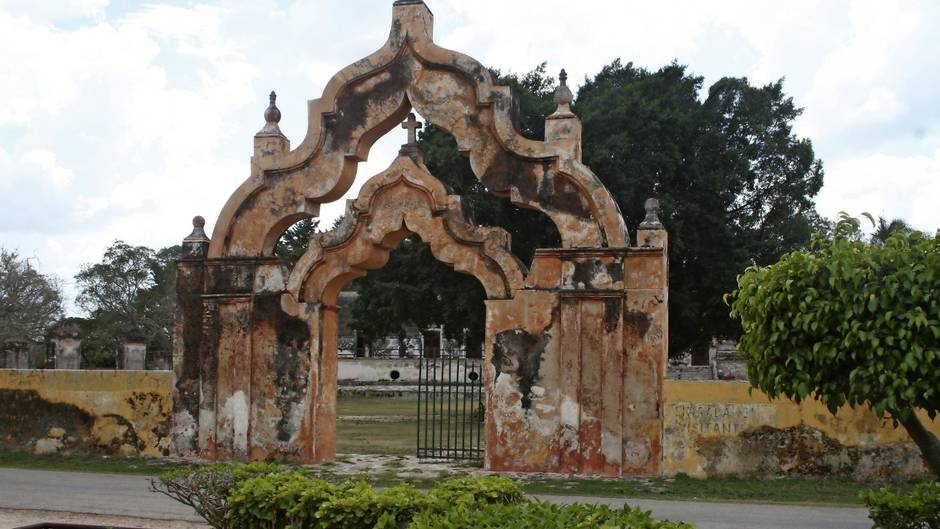 We make a brief stop in Yaxcopoil, home to one of the many restored haciendas that served as mansions on the old sisal plantations. There’s no time to take a tour, so we keep moving – stopping only for topes. 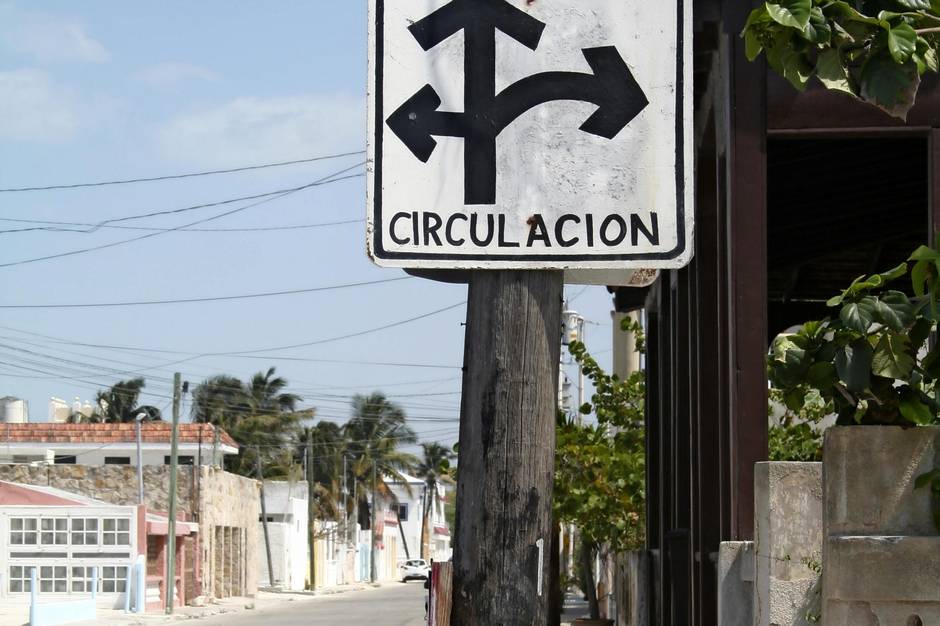 As Uxmal approaches, we get relief from the monotonous scrubland scenery by amusing ourselves translating the road signs. Our favourites are “Obey the signs.” “Obey and respect the signs,” and the puzzling “Don't leave rocks on the road.”

We stop in the Mayan town of Muna to savour a bit of Sunday family day in the main square, accepting free watermelon offered by some local teens and marvelling at the variety of goods for sale – from shoes to brassieres. 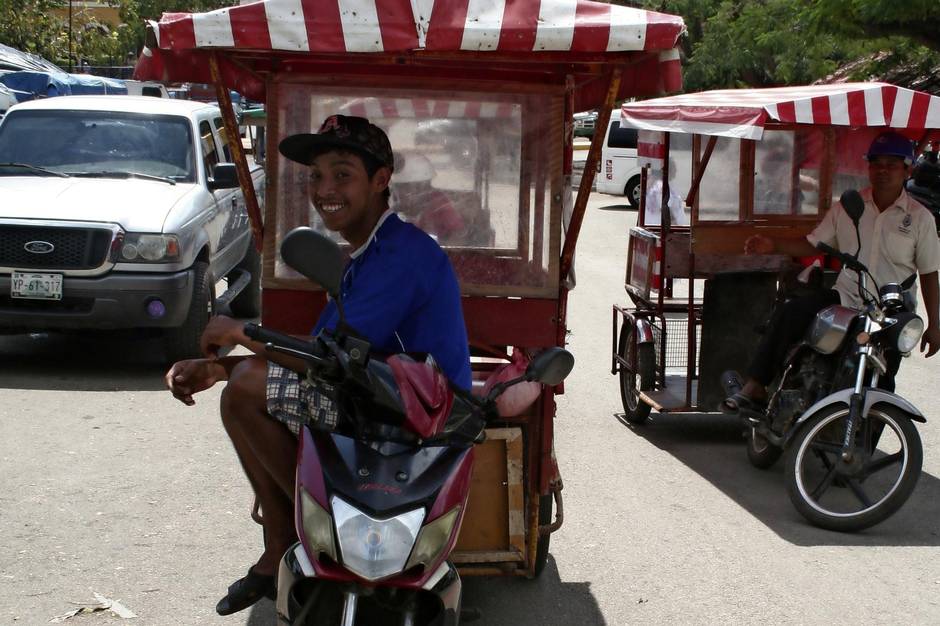 Driving in Muna is a challenge, even by Mexican standards. Not only do you have to deal with topes, but you need to dodge dozens of “triciclo“ cabs. There are also no one-way signs – even though almost every street is one way.

That may explain why there are so many triciclos and so few cars.

It's worth the drive to Uxmal 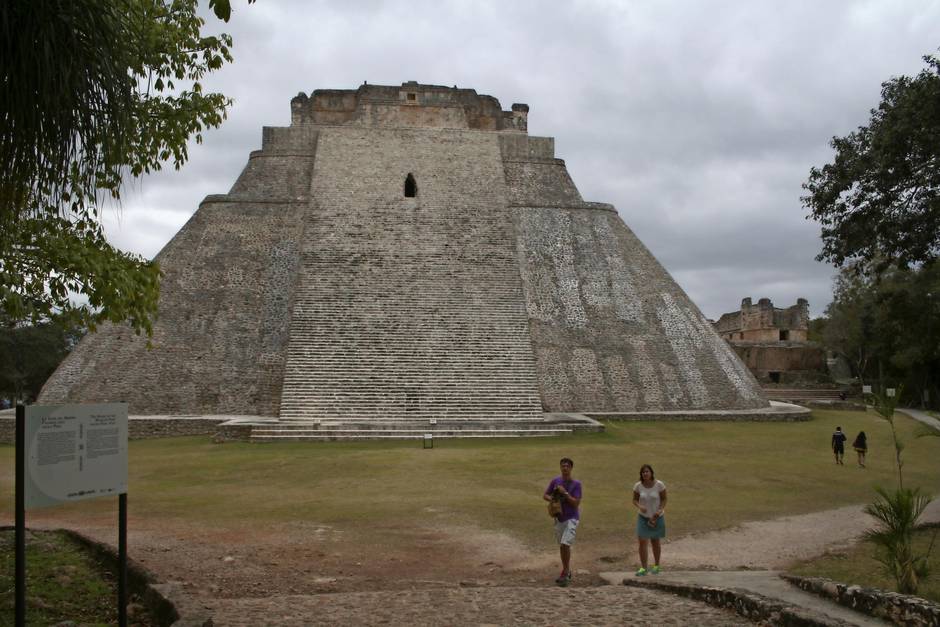 We arrive at Uxmal three hours after leaving our villa and spend two hours touring one of the most amazing archeological sites.

All that touring has us pining for dinner, so we head toward Santa Elena, spending all 14 kilometres behind a triple-decker livestock truck full of pigs.

When we arrive at a quaint restaurant called the Pickled Onion I pass on the poc chuc (pork) and opt for chicken panuchos – one of Mexico’s greatest contributions to gastronomy.

A couple of hours later, we take a tope-free ride and return to Chicxulub where, upon making a right turn on what may or may not be a one-way street, we hit an unmarked tope in the dark – endangering the Matiz’s front end and the tops of our heads.

We instantly feel at home.