I'm writing to see how you're feeling. You must be a little stressed. You've finally introduced a car that's supposed to appeal to the masses, the Model 3, which rolled off your California assembly line on July 7. It costs $35,000 (U.S.) and has 345 kilometres of range per charge. A Tesla Model S 100D with 100 kWh battery all-wheel drive costs $155,550. You're going all in. Automotive News reported that Tesla will "ramp up Model 3 production to 20,000 units a month by year end – a key to Musk's plan to produce 500,000 vehicles in 2018 and about one million by 2020." That's a lot of electric vehicles.

At the same time, you're partnering with French energy utility Neoen to create the world's largest lithium-ion battery. It will be used to store renewable energy in South Australia. Some believe it will signal the beginning of the end of our world's reliance on fossil fuel.

"He has brought reality crashing in," Tim Hollo, executive director of the Green Institute, wrote in The Guardian. "Within 100 days, there will be a huge battery system making South Australia's energy grid clean, affordable and reliable, and benefiting the eastern states along with it. All the talk of building new coal-fired power stations, or a Snowy Hydro 2.0, no longer sounds vaguely 'truthy.' It sounds ridiculous. It sounds silly. It sounds like old men yelling at clouds."

So, like I said Elon, you have a lot on your plate. Some are calling it your "High Noon." As someone whose definition of "High Noon" involves deciding between a single or double espresso, I can only imagine what you're going through. The world's conventional auto manufacturers are all hoping you fail. Anyone who has an investment in keeping us glugging oil and gasoline hopes you fail.

Timing is everything and, in this respect, you may have picked the right moment. In North America, at least, the zeitgeist is best described as "consciously powerless." Wars are all around us. Things that should not be flooding are flooding. The weather is more disruptive. It's as if the Earth were angry. Our political leaders are ineffectual. Some are trying to fight climate change. Some, like U.S. President Donald Trump, are trying to roll back the clock. He doesn't care if San Francisco is swallowed up by the Pacific like a 21st-century Atlantis because San Franciscans didn't vote for him. That leaves Silicon Valley's robber barons to save the world.

So I have a feeling you're going to prove the doubters wrong. This feeling has nothing to do with technology or market share or even self-driving applications. It has to do with hope. I believe that consumers will buy Tesla Model 3s because doing so will allow them to look to the future without dread. I think people will pay $35,000 for that opportunity. They'll do it whether or not cars like the Model 3 really are going to save the planet for humanity. If they can wait a few years, they can buy an electric Volvo. That company recently announced that by 2019 all of its vehicles will have an electric motor, either battery-powered or hybrid.

This is the beginning of the beginning for the Model 3 because I can recall when the notion of an all-electric high-performance vehicle was a weird California dream. I first sat in a Tesla Model S shortly after its release in 2012. It was in San Jose, Calif., at the Santana Row where Tesla still has a showroom. There was a single Model S in the shop and curious customers took turns sitting in it and having a photo taken. I took a picture of my daughter in it. She was 18 at the time. "That's the future," I told her.

My guess is that when she's finally able to buy a car, she and all millennials like her will opt for the most environmentally responsible vehicle they can. Hopefully, by then, the Model 3 will be selling for less than $35,000. So, good luck, Elon. Get some rest and try to get the next version of Tesla down to around $19,000.

What the immediate future looks like for driverless cars
June 13, 2017
Toronto electric-vehicle showroom focuses on education, not sales
May 11, 2017 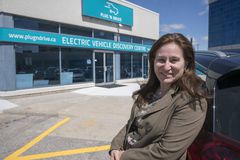 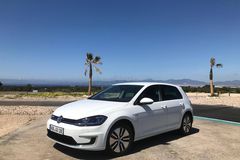