Whenever I hear a government, be it municipal, provincial or federal, claim it is "exploring new and innovative ways" to do things, a chill runs down my spine. That's because when a government says "new and innovative," it can only lead to one of two outcomes. If these "ways" actually help citizens, they will be neither new nor innovative.

If they limit or infringe on civil rights and/or extract financial penalties from people, they will be extremely new and incredibly innovatively effective.

Case in point: the Ontario government spent the spring soliciting feedback from Ontarians about "exploring new and innovative ways" to pay or challenge traffic tickets. Specifically, according to the Ontario attorney-general's website, "the merits of a potential administrative monetary penalty [AMP] system."

The current system mirrors the criminal trial process. That's a problem, according to the government, because it's costly and involves "significant public resources, such as the time of a justice of the peace, a prosecutor and the enforcement officer who laid the charge" – also known as the people who say you're guilty.

Under an AMP, "the person receiving a penalty notice 'ticket' would still have the option to pay or dispute the penalty, but through an online process." So, if you've been accused of a traffic offence (outside the criminal code), instead of a trial you'd get a "dispute resolution process" managed by an "unbiased, independent decision-maker" and "convenient 24/7 access" to an online system. No need to travel to a courthouse. You can be found guilty from the comfort of your own home.

The Ontario Attorney General attempted to clarify confusing areas on its website.

Question: What would the system look like and how would it work?

Answer: Through this consultation, we hope to gather input on what the system would look like, and how it will work. At this stage, we are simply exploring the idea of moving to an online AMP system. No decisions have been made.

Translation: Our new AMP system is in the final stages of its beta testing and will be rolled out shortly after the findings showing that everyone is in favour of it are released.

Question: Who will the independent decision maker be? How can you ensure their independence or impartiality?

Answer: No decisions have been made about this yet. That's why we are reaching out to court users, municipal partners and the public for their input.

Translation: We have a list of unbiased, independent decision makers at the ready. Think of them as online support people who get to fine you.

Question: Will there be an opportunity to dispute traffic or parking tickets?

Some municipalities, such as Brampton and Oshawa, already use AMPs for parking offences. So do the feds, and if you think the fines are small, think again. Companies can be fined up to $25,000 a day for violating the Canada Consumer Product Safety Act. The Ontario Energy Board can issue AMPs between $5,000 and $20,000, while the Ontario Ministry of the Environment can impose penalties up to $100,000. Forget going to the Charter of Rights and Freedoms. It doesn't guarantee you a trial if you haven't been charged with a criminal offence. Brace yourself. First they'll come for your traffic tickets and spare you the cost and inconvenience of a trial, and then they'll come for a whole lot more.

The future is going to get a whole lot more "new and innovative" and we're all going to pay for it.

The seven sins committed by drivers looking to get hurt
May 14, 2015 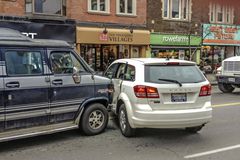 Why it's dangerous to still drive on your winter tires
May 4, 2015