Punk’s not dead; it just needs a jump-start. Luckily, if there’s one thing I’ve learned from the bizarre career of Nardwuar the Human Serviette, madcap interviewer and punk-rock legend, it’s that you always show up prepared. A quick bit of work with a screwdriver, attach the leads and the air-cooled glory of the Evaporator’s VW dune buggy bursts to clattery life. Three chords, a flat-four and the truth. 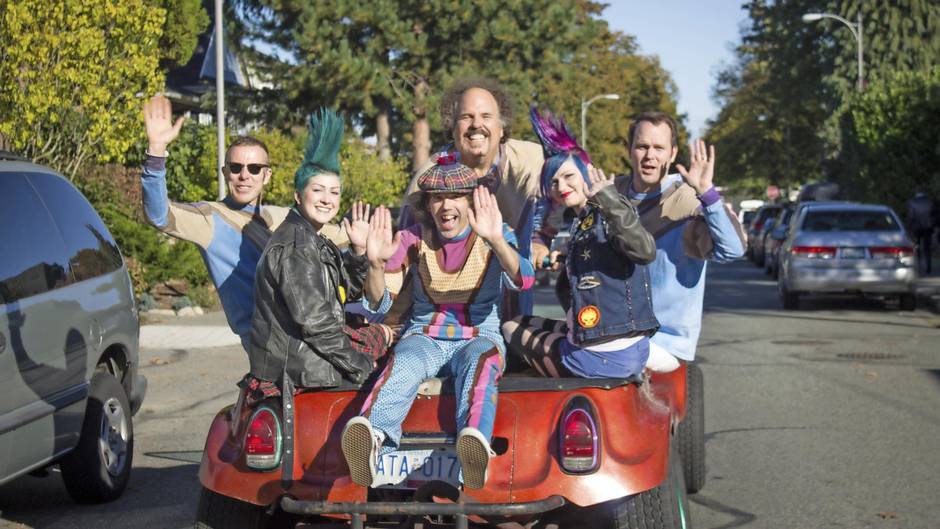 We’re just down the road from Neptoon Records, the oldest vinyl shop in the city. The soaring cost of living and endless development is changing the face of the city, but some East Vancouver institutions refuse to change.

Nardwuar – real name John Ruskin – is one such institution. Capped off by his signature plaid tam o’shanter, he’s interviewed the royalty of rap and rock, from Kurt Cobain to Jay-Z. He crowd-surfed his TEDx talk. He got the legendarily grumpy Henry Rollins to grin. Remember Jean Chretien’s infamous “Pepper, I put it on my plate” quote? It was in response to a question from Nardwuar.

On screen, he’s a pogo-ing lunatic, bursting with energy and repeating his interviewee’s name multiple times. It should be off-putting – and it is, at first – but it works because he’s a meticulous researcher. Perhaps we should let singer Pharrell Williams tell it like it is: “This is one of the most impressive interviews I’ve ever experienced in my life. Seriously.”

We nearly lost him. The man who asked Mikhail Gorbachev which world leader wore the largest pants, and quizzed faith healer Ernest Angley to find out if there was a cure for the summertime blues, suffered a stroke last December, and had heart surgery earlier this year. It has slowed him down not a jot – he scuttles from behind the camera to leap into the glittering dune buggy and shouts out the chorus to his band’s latest single, Mohawks and Dreadlocks. 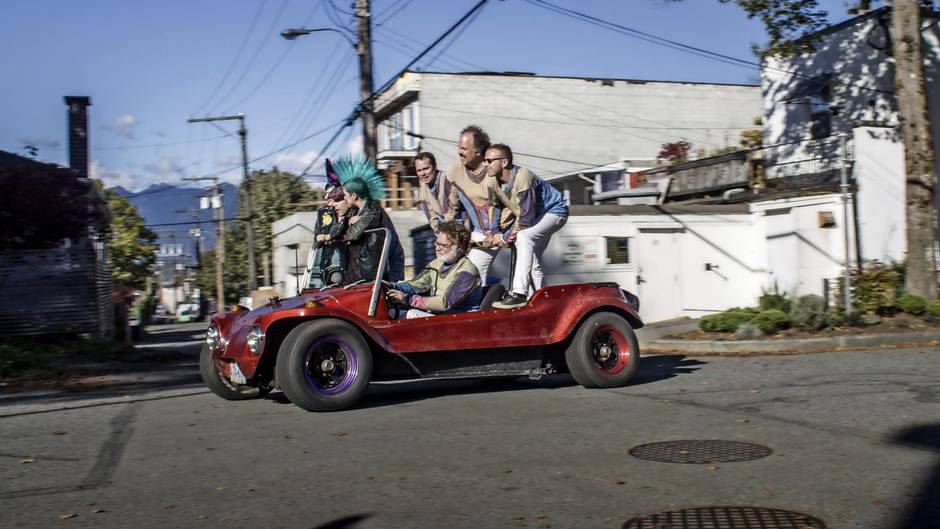 Fans of The Evaporators will recognize this buggy from the cover of 2001’s Honk The Horn album. It’s been a part of the band for almost 30 years, originally owned by drummer Scott Livingstone, and now in the hands of bassist John Collins. He showed up at Neptoon Records a little late – and on foot.

“Just another day in the life of a dune buggy that won’t start,” he said.

The Volkswagen dune buggy is probably the most punk-rock vehicle ever imagined. Take one people’s car, remove all concessions to comfort, soup the hell out of the engine and try to hang on. The original was built by Bruce Meyers, who drew on his experience building boats to create a simple, open fibreglass shell, which he bolted to a shortened VW Beetle chassis in the mid-1960s. It was called the Meyers Manx." 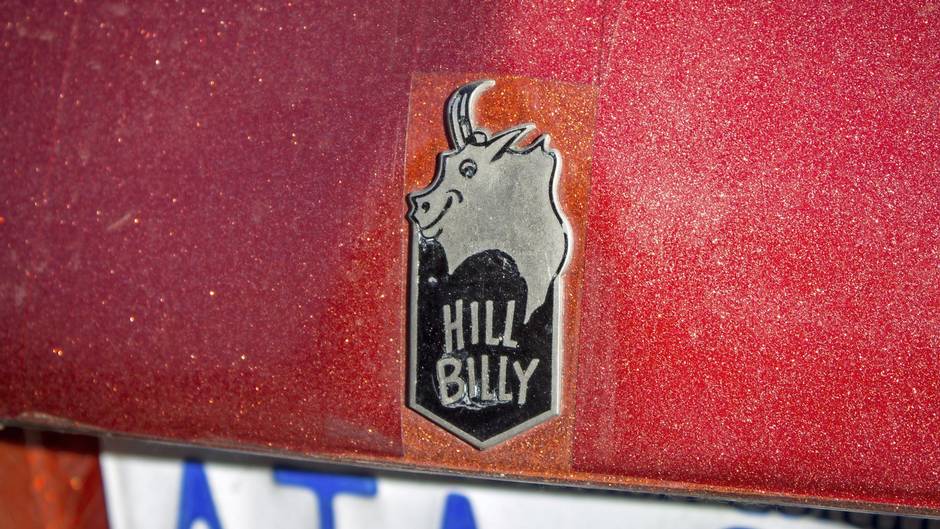 The shiny, happy bug-eyed sand rail fit right into California surfing and hot-rodding culture. Because building one yourself was relatively easy, people started making them all over the world. Every design was different, but the elements were all the same: engine, transmission, steering, brakes and not much else. It’s a little dangerous, a little loud, a little too fast for the everyday.

The Evaporators buggy is a Hill Billy, a relatively rare version made in North Vancouver. Livingstone fixed it up in the 1980s, and it fit right into the band’s signature wacky style.

Collins isn’t sure what’s wrong with the car this time. “I’m not mechanically-minded,” he says. “I just like old cars.” We walk up toward Liberty Café in the fall sunshine to investigate. 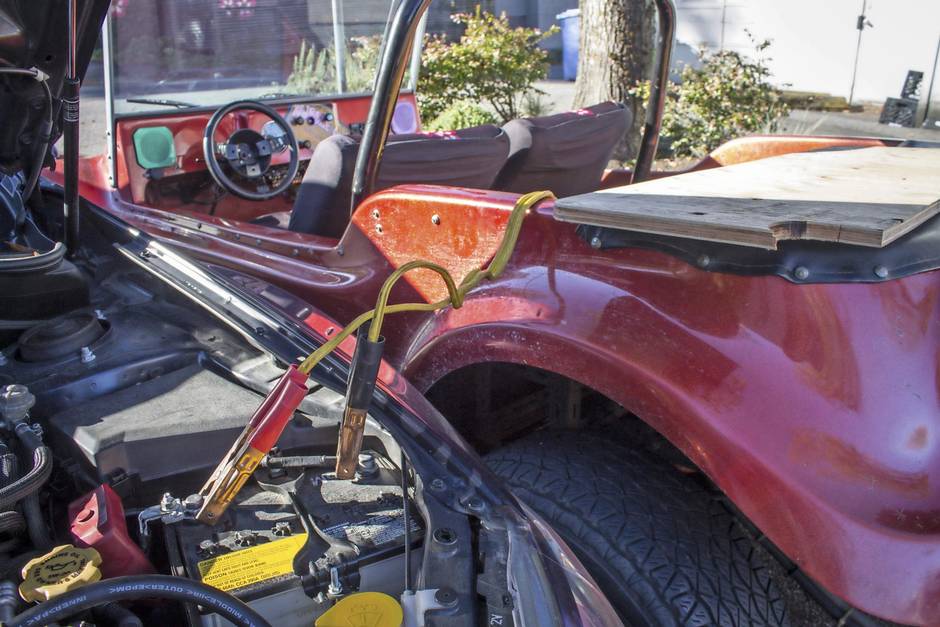 The car won’t even crank over. Suspecting an electrical problem, I check the wiring (easy enough to do with the buggy’s minimal bodywork), and then set about taking off the plywood panel over the battery box. Happily, it appears the alternator isn’t quite dead yet, and once we get the jumper cables hooked up, the dune buggy’s running and ready for its cameo.

Nardwuar’s both behind and in front of the camera for this shoot. All five of The Evaporators pile into the tiny VW, along with two mohawk-sporting extras. 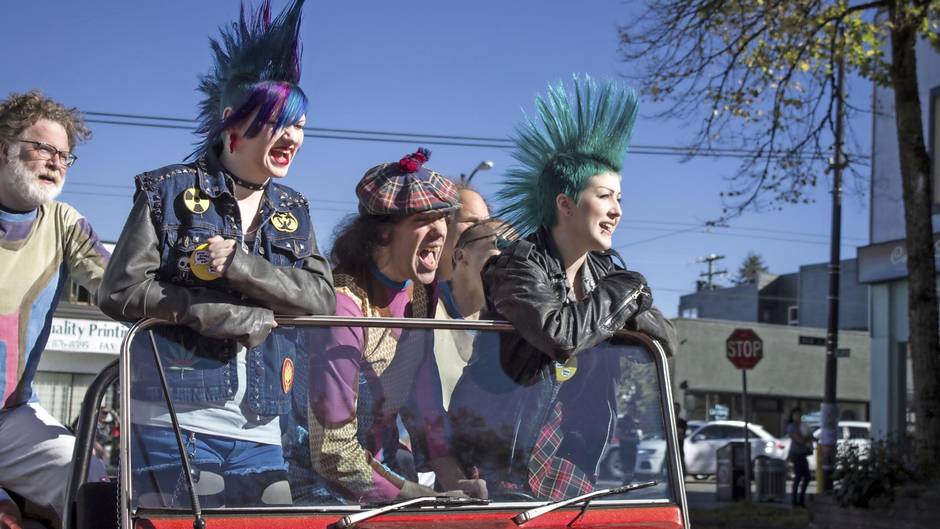 “Mohawks and dreadlocks,” everybody sings. “Come out tonight! Mohawks and Dreadlocks, all the punks unite!”

A woman in a car-sharing Prius rolls right through the shoot, clutching a cellphone. That’s not very punk rock, lady. A passing mother and kids smile and wave, “Are you feeling okay, Nardwuar?”

“Oh yeah!” he says. “The doctors say just get out there, so we’re gonna keep on rocking!”

Soon though, we’ve got enough static footage, and the heavily-laden buggy rolls off down the street with its madcap crew. A vintage motorcycle squeezes past, its two grinning riders honking the horn in a “shave and a haircut” pattern. It takes a minute to realize they’re playing the tune of Nardwuar’s signature interview sign-off. 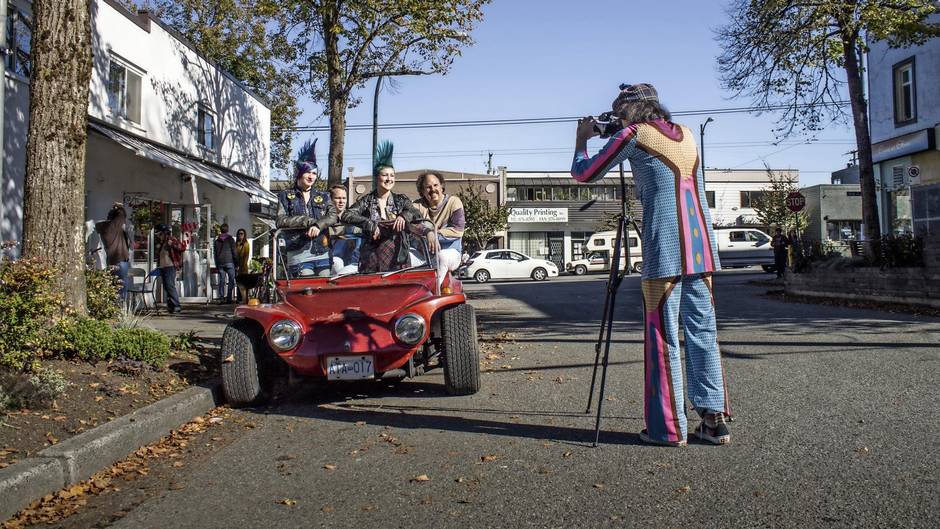 It takes a while until Nardwuar is satisfied we have enough footage of the buggy to intersperse with shots already taken with Livingstone’s gorgeous 1967 VW Westfalia. He’s in and out of the car, making sure everyone’s in frame, barking directions. It’s a circus.

But, in the end, it all works. The Evaporators latest LP, Ogo Pogo Punk, drops Nov. 15, filled with the usual lunacy and energy. The video for Mohawks and Dreadlocks comes out at the same time.

Boundless energy, honesty, and an off-the-wall style that reveals purity of purpose. Like his band’s dune buggy, Nardwuar can’t be stopped. Here’s to both keeping on rocking in the free world: doot doola doot doo – doot doo! 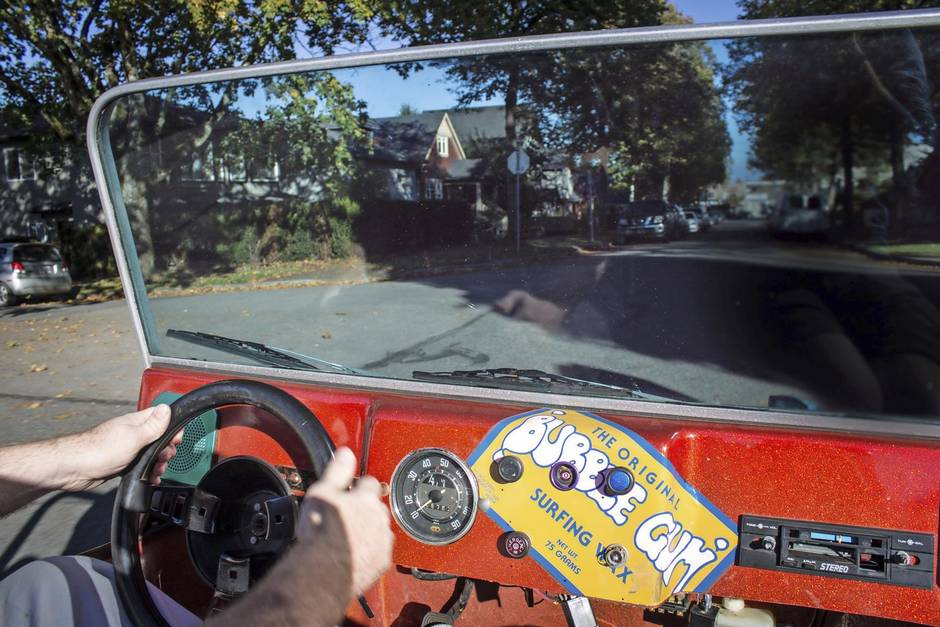