The writer was a guest of Nissan Canada. Content was not subject to approval.

Celebrated in song and story, Route 66 – the “Main Street of America” – was decommissioned as a highway in 1985. But it is still a favourite journey for those searching not only for interesting sights and quirky souvenirs, but a piece of Americana itself.

In photos: Odd and awesome sights on Route 66

Of all the highways, mountain passes, race tracks and other routes worldwide, arguably none are linked so closely with their country more than the “Mother Road,” as it is also known. It was the major east-west corridor through the heart of America, and the economies of the communities through which it passed prospered. “It was the one thing that unified this country and was probably the most responsible for the economic, social and cultural development of the United States in the 20th century,” says Gary Fleshman, a Route 66 expert and tour guide.

The history of the Mother Road

Before Route 66, there was no direct route across the United States. Construction of the Mother Road of America started in 1926 and, by 1938, the entire line had been done in Portland cement, which is more dense and durable than normal cement. Route 66 would take on three different alignments over the next 60 years to improve travel before it was decommissioned in 1985. Because of this, it isn’t a simple ribbon winding to the West Coast; some parts end, some have been paved over with various interstates and some are simply gone. But there are many parts of the old road that can still be explored; you have to know where to look. Road signs denote Historic Route 66, but planning the journey is essential, as it’s easy to spend days getting lost and doubling back. 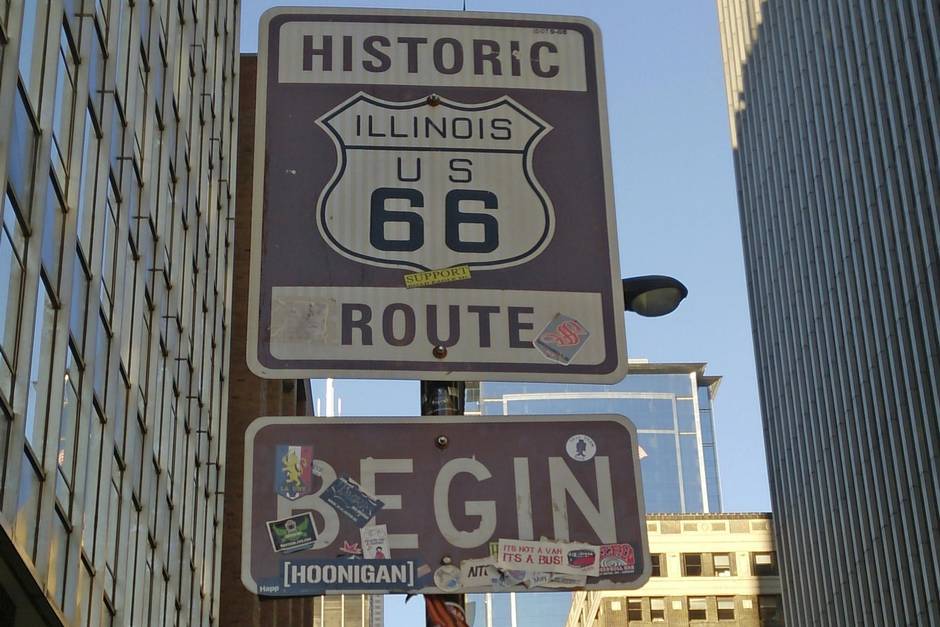 The route starts (or ends) in downtown Chicago; there’s even a small sign on Michigan Avenue to mark the spot. The almost 4,000-kilometre journey starts on Interstate 55 out of the city to hook up with Illinois 53, which runs parallel with the old road. There are areas where the original cement Route 66 is visible off the main artery, with grass growing through cracks, but still in amazing shape for its age. At Wilmington, Ill., there’s the Gemini Giant, a 30-foot kitschy statue outside the Launching Pad Drive-In. The Gemini Giant is one of at least four “Muffler Men” roadside figures still on Route 66, once-popular advertising props used to promote businesses in the 1960s.

Kitsch is a recurring theme; the Gunnar Mast Trading Post in Atlanta, Ill., is one of many curio and souvenir shops that makes its money from Route 66 nostalgia. Outside is another giant Muffler Man; here he’s holding a hot dog.

Click on the points in the map below to see photos of each location in the article:

The Cadillac of kitsch

Into Missouri (pronounced “Mizzoura” for those who want to fit in), you can stay at the historic Wagon Wheel Motel in Cuba, Mo. In business for 79 years, it’s the oldest continuously operated motel on Route 66.

After that, it’s onto Kansas and Oklahoma, down through Texas, into New Mexico, the top of Arizona, and finally into California at the famous pier of Santa Monica, where the road ends. Along the way is a cornucopia of historical, geographical or otherwise notable sights and stops. It’s almost impossible to see everything, but Fleshman once took more than seven weeks travelling every corner of the route. Significant attractions: the Blue Whale of Catoosa, Okla., a giant waterslide; the U-Drop Inn at Shamrock, Tex., an art deco service and food stop. And a must-see stop is the Cadillac Ranch outside of Amarillo, Tex. – bring spray paint to add an artistic touch to the row of Cadillacs half-buried in the sand. 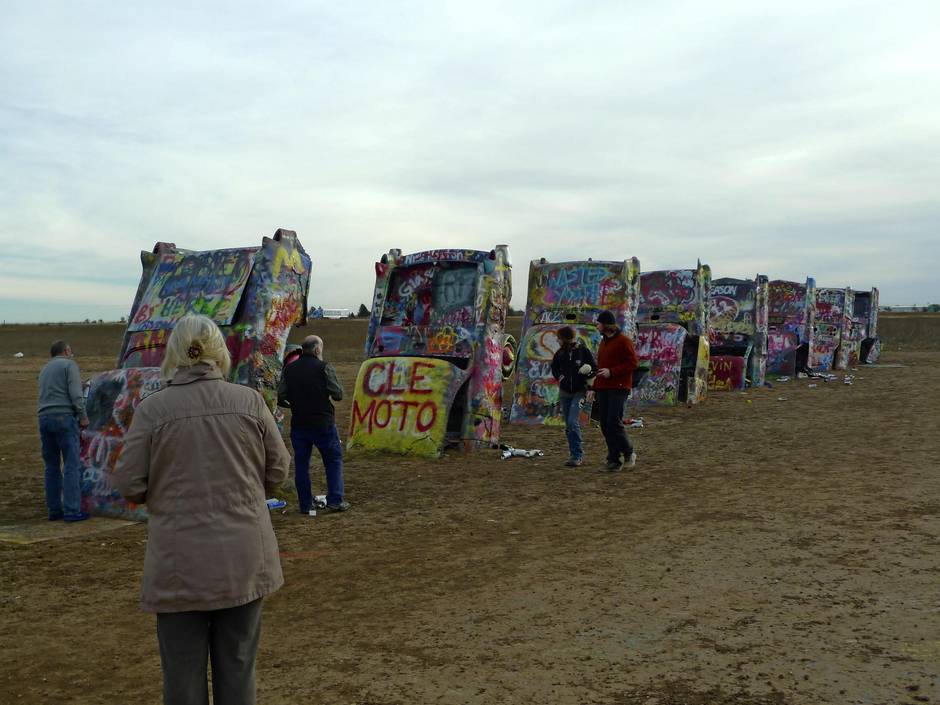 The world comes to Route 66

The Midpoint Café in Adrian, Tex., (open from April to November) sits halfway between Chicago and Santa Monica. The cafe’s slogan is “when you’re here, you’re halfway there” and town signage declares that travellers are 1,139 miles away from either original Route 66 endpoint.

“This year, we had folks from 65 countries, plus all the states and eight provinces in Canada,” he says. Minutes later, he’s talking to a young twentysomething couple seated in a booth. “Ukraine,” he laughs. “That’s the 66th country we’ve had in here this year.”

Purschwitz recommends interacting with the locals. “You get to meet people who are the true lifeblood of the U.S.,” he says. “I really, truly believe that Route 66 is one of the best ambassadors of the U.S. to the world.”

“It’s Americana,” Fleshman says. “To experience the real America, the small towns, not the tourist stops or the big cities; it’s small-town America.” 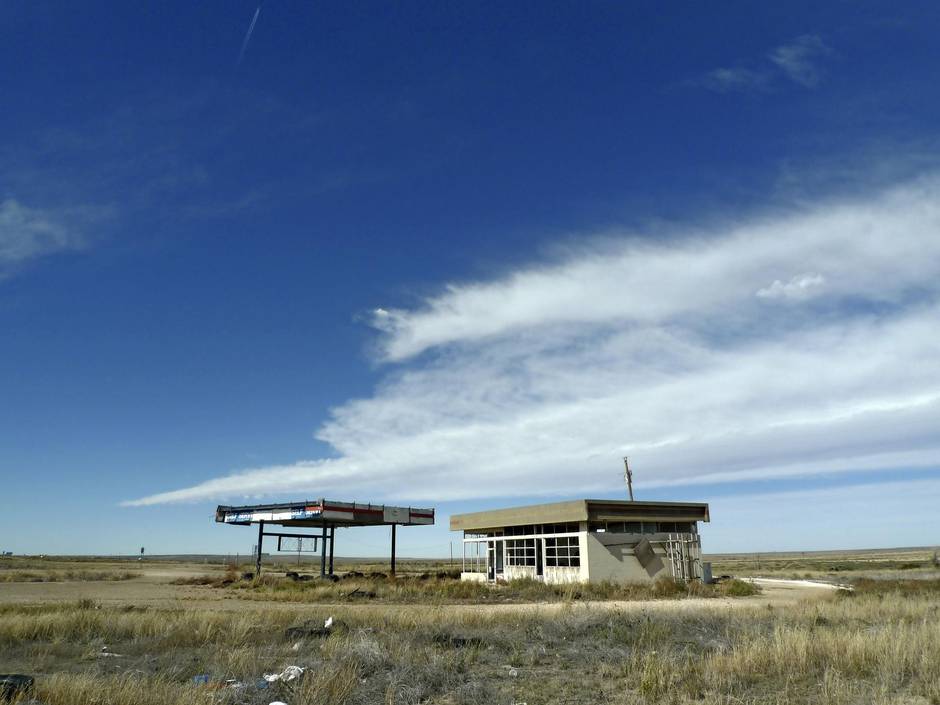 If Route 66 is a history lesson of small-town America, it’s also a warning about unrelenting progress, with new interstates diverting traffic and, subsequently, dollars away from gas stations, stores and towns along old Route 66. Eerie ghost towns, their structures crumbling from decades of neglect, are in abundance. Glenrio, originally a railroad town established in 1903 and called Rock Island, straddles the Texas-New Mexico border. Once a thriving little centre, it was rendered obsolete when nearby Interstate 40 was built in 1973.

In Texas, the landscape transforms from green plains to rocky desert; towns and rest stops are fewer and farther between. This is real cowboy country, with tall, red mesa rock formations, fine golden sand and blue sky that stretches forever. The El Rancho Hotel in Gallup, N.M., regularly housed movie stars in the 1940s and 1950s while they filmed in the state.

Lighting the route with neon

In Arizona, the natural wonders include the multi-coloured rocks of the Petrified Forest and, slightly off the path to the north, the awe-inspiring Grand Canyon. 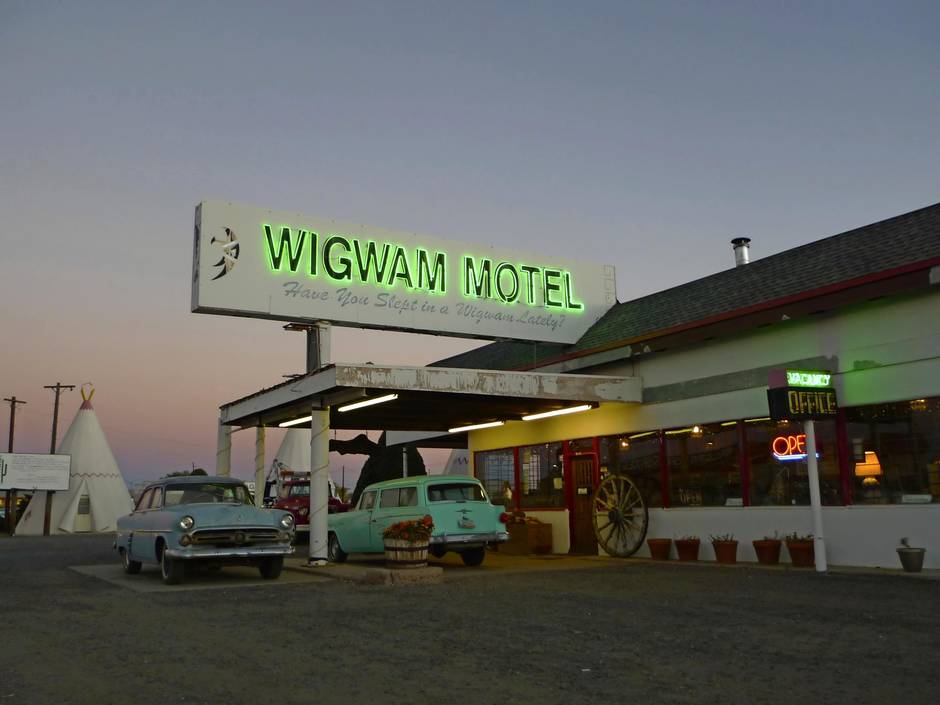 And across the route – especially in the south – the man-made wonders include the glittering colourful neon signs decorating the many motels that beckon weary travellers; the Wigwam Motel in Holbrook, Ariz., is perhaps the most fun, with its concrete teepee cabins, but the main strips of towns such as Tucumcari, N.M., and Kingman, Ariz., are littered with old places to rest your head.

The old mining town of Oatway

Between Kingman and California is the Oatman Highway – a desolate and demanding 80-kilometre desert drive filled with tight curves and narrow passes through the mountains. Oatman itself is a former gold mining town turned tourist trap, where Mike Fox, a long-time resident, raconteur and guitar picker, will regale visitors with tales of how Clark Gable and Carole Lombard spent their honeymoon here, or about the friendly poltergeist at the Oatman Hotel. Bike enthusiasts can check out the motorcycle museum, which is basically a second-floor storage of old Harley-Davidsons from the early 20th century.

Through the Mojave Desert, Amboy, Calif., looms off in the distance. Once a boom town, it is today not much more than a post office, tourist shop and Roy’s Cafe and Motel, all located near an extinct volcano, the Amboy Crater cinder cone.

And then, hours later, traffic builds toward Los Angeles as we weave down to the Pacific Ocean at Santa Monica. Across America, from the Windy City to a modern beachfront burg, a journey across America, a voyage of discovery from a different time.

The writer was a guest of Nissan Canada. Content was not subject to approval.