I found Will Zaraska online. A registered dealer, he handled all the import and registration paperwork and made it look easy. The first time we met in person, Zaraska pulled up outside my apartment after a 1,600-kilometre journey from South Carolina with my BMW M5 on his trailer.

The M5 was real, it was spectacular, and as advertised. The car gods smiled on me that day. The gamble paid off. That was May. How has the first season of exotic-car ownership been? And how much has it cost?

The car failed its safety inspection ($90) owing to a right rear tire that was nearly bald. All four Hankooks came off, but finding a replacement was hard. And expensive.

The car originally rode on Michelin Pilot Sports, which aren't made any more. I wanted to experience that sweet stock handling just as all those engineers in Germany envisioned. But the modern equivalent tire – Michelin Pilot Super Sports – have more grip than the car's chassis was tuned for. How much more? About 13 per cent more, as measured in a dry braking test, according to Steve Calder from Michelin North America's product marketing department. Tire technology evolves shockingly fast.

I bought Michelin's Pilot Sport All-Season 3+ tires ($1,080 installed), even though I won't drive the car in winter, and they're still stickier than the original Pilot Sport summer tires on a 20 C day. So far, so good.

The car needed a front licence-plate holder and new trunk badge from BMW, which cost a combined $145. I removed the window tint from the right side myself, then gave up and paid a pro to remove the rest.

I took the M5 to my local independent BMW garage to have professionals go over all the mechanicals. Mercifully, the techs at AutoTrend didn't find any major issues. They did an oil change, replaced a squeaky engine-belt tensioner, power steering hose, the outside temp sensor and fixed some interior trim.

Mark D'Sylva is a minor legend in the BMW tuning world because of his performance chips, which deliver improved power and torque. My car came with an awful Shark Injector tune, which boosted torque but made the throttle jerky, like an on/off switch.

Luckily for me, D'Sylva lives in Toronto. For a few bucks, he restored my car back to its factory tune. The throttle is now more linear and the car is easier to drive in traffic. I don't miss the extra torque. The 5.0-litre V-8 doesn't need it.

While trying to install the latest map data for the ancient and pathetic sat-nav system, the CD got stuck. I had to take the system out of the trunk and open it up to get the CD out. And I'm not sure if it's working properly because all map data is for South Carolina.

I'm looking for an indoor car cover. So far, the hardest part about owning an exotic is trying not to drive it. I must keep the mileage low-ish. The M5 is everything I'd hoped. It hasn't cost any more to run than expected, but this was only its first season. Those gushing, glossy reviews in European car magazines I read years ago as a teenager were correct.

It's going to be a long winter. Also, I need to become a financial something or other.

Should Canada set a date to ban gas, diesel cars as Germany did?
November 15, 2016
For decades the future of electric vehicles has seemed a few years away
November 8, 2016
Why do we drive such big cars in Canada?
October 4, 2016 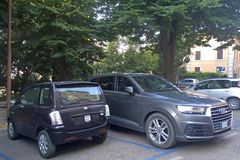