People disagree on what the best car is. But I can now lay this question to rest.

If you live in a city – which, statistically, most of you do – forget about a sports car for daily duty. Driving something that can corner like a roller coaster is fun, but at 5 km/h in gridlock, it's, well, like being stuck on a roller coaster for two hours. SUVs are good because they're gigantic and take up lots of space, right? Err, no. And your basic econobox is about as thrilling as a Bodum.

Besides, you've got to deal with streets which increasingly look like Swiss cheese, masochistic marathoners shutting down the core, construction, rush hour, reverse rush hour, gas prices and the fact there are no more parking spots left, anywhere.

Given this sorry state of affairs, I stumbled across the perfect vehicle for city dwellers. It's a rear-engine, rear-drive, two-door coupe – but no, it's not a Porsche 911. This car is happy in gridlock, and even happier with the stability-control light blinking all the way down a highway off ramp, plus it goes through fuel slower than coffee goes through me.

The car is the new Smart fortwo. I am as surprised as you. I was not expecting much when I opened the freakishly large door and stepped inside the pod.

The old Smart was known for two things: being small, and for having a terrible gearbox that bucked you back and forth like a grumpy mule. The 2016 Smart is all new, with a dual-clutch automatic gearbox smooth enough you don't notice it.

Completing the first 90-degree bend, the Smart almost did a U-turn. The steering is go-kart, track-bike, fixie fast. And the turning circle is so small, it'll nearly do a pirouette. It makes all kinds of fun parking-lot manoeuvres possible. It could be an Olympic sport, such as figure skating: triple U-turn into reverse dosey-doe into parallel parking spot. Straight 10s! I've never driven a Bobcat – though I'd like to, if anyone will let me – but I imagine the Smart handles the same as one of those skid-steer construction buggies.

The vital statistics of the fortwo are as follows. The cheapest version is $17,300, but to get the specs you want – panoramic roof, nice wheels, automatic gearbox – it's about $22,000. The engine is a 0.9-litre, three-cylinder that would barely power the HVAC unit on an S-Class Mercedes. The motor makes just 89 horsepower and 100 lb-ft of torque, which is enough to do 0-100 km/h in 11 seconds; the engine groans the whole time, making everyday driving feel you're going flat-out when, until you look down at the speedo and you're 5 km/h under the limit. There's even a manual gearbox option for true believers.

The fortwo I drove had an orange cloth dashboard. And why not? Why is everything grey? Or, if not grey, then made to look like the inside of a 1950s men's-only cigar lounge. Car designers take their products too seriously.

The one hiccup is that most people won't want to pay $22,000 for a two-seater. It's a shame Smart doesn't sell the four-door in Canada.

An old pearl of wisdom states it's better to drive a slow car fast than a fast car slow. That's garbage, or so I thought. It's better to drive a fast car fast obviously, except that, as of 2016, that's impossible. In most performance cars, hitting the redline in second gear is enough to earn you a ticket. So we'll have to settle for driving a slow car fast, and you know what? It's fun, the same kind you have as an adult going on the kids' rides at the CNE – all the thrill without any of the fear.

The Smart fortwo is not the best car, it's the best car for the world we live in now. It's a menace your parents would approve of, a kitten in kitten's clothing, a most unlikely hero. Have fun. 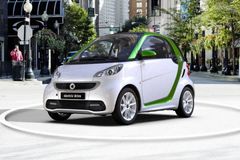 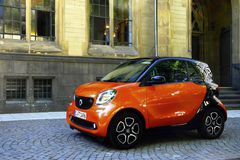 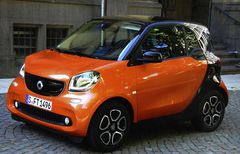