Like all humiliating experiences, it began with a benign question. In this case, "How about a test drive?"

I was in the Tesla showroom on Santana Row, San Jose's posh outdoor shopping district, and it was a homecoming of sorts. I was there to see how the place had changed since I'd first visited it in 2012, when Teslas were still a rarity on the road. Back then, Tesla's Santana Row location buzzed like a beehive. People swarmed in just for a chance to sit in a Roadster and have their picture taken.

In 2017, electric vehicles are no longer curiosities. They are viable options for drivers who do not want to leave a large carbon footprint. The Santana Row location had a streamlined businesslike feel. I was greeted by a phalanx of sales assistants, and as I wandered about examining the various shades and sheens of the Model S and Model X, a chipper fellow suggested I make an appointment to take one for a spin.

"How about a test drive?" the chipper fellow asked.

I explained that I was in town visiting and that I'm not looking to buy.

Why not, I thought. Here was a chance to take an impromptu test drive that wasn't part of some press junket (where the journalist is massaged and fattened-up like so much veal). Why not take the chance to try the Tesla like any other curious customer?

And so, the next afternoon found me behind the wheel of a Tesla Model S cruising the streets of San Jose, accompanied by a Tesla sales associate named Alyssa. The first thing I noticed was the famous Tesla silence – electric vehicles are known for being a quiet ride. Test drives are often awkward since all you do is make small talk about the car. I was asked how I think the car handles. I gave the same answer I have given each and every time I've test-driven a car.

I was not lying. It did. Then again, I've never driven a car with an $85,000-plus Canadian price tag that I didn't think handled well. I can't imagine replying, "It's kind of lame really, the handling. Not good."

"How's the handling" is right up there with "How's your day?"

We talked a little about Canada and America, and then I was asked what kind of car I drive back home. Again, this was a fair and standard test-drive question. This was the moment things turned.

"I have a minivan," I said and then, without thinking, as if the voice was coming from another person, added, "and a 1971 Chevelle."

I heard those words – my words – and was overwhelmed by a disorienting mix of shame and wonder.

What had possessed me? I don't judge a person by the car they drive, why would I feel the need to pretend I owned a vintage muscle car?

I was all right with test-driving the Model S if I was believed to be someone who would buy one, but to be known as a minivan-driving scrub who was just wasting everyone's time was, on a subconscious level, too much. I was a self-loathing minivan driver not in the ironic way but in a deep and real space. I'm okay with the idea of being the sort of out-of-town guy who takes a free test drive on a car he has already said he has no intention of buying, as long as I'm perceived as some sort of automobile connoisseur.

The rest of the test drive was fine. The Model S self-driving function was impressive. I found the rear-view camera disorienting. There was no way I was going to admit to my lie, so I nestled into it and talked about how the Chevelle handled and how I kept it in the garage in the winter. It was pathetic.

The goal of any test drive is to learn something. Mine was a success. I learned that The Tesla Model S is an impressive automobile. I also learned that I'm an idiot.

Will autonomous cars silence the chorus of angry honking?
October 24, 2017 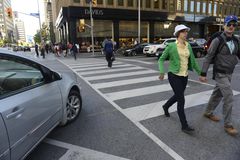 Canadians truly are good drivers – or so we tell ourselves
October 9, 2017 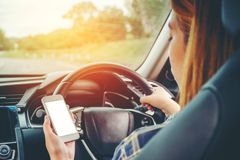 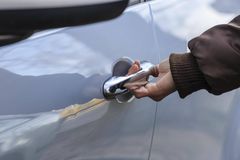 Follow Andrew Clark on Twitter @aclarkcomedy
Report an error
Due to technical reasons, we have temporarily removed commenting from our articles. We hope to have this fixed soon. Thank you for your patience. If you are looking to give feedback on our new site, please send it along to feedback@globeandmail.com. If you want to write a letter to the editor, please forward to letters@globeandmail.com.
Comments