Contrary to all that's holy, there actually are Canadians who claim that winter is their favourite season.

We can only assume they are the same kind of people who name Larry as their favourite Stooge and the Lada as their most-loved imported car.

But we can be certain we know who they are not: drivers, or at least all those who don't derive income from plowing driveways or repairing auto bodies destroyed by ice-induced crashes.

Nobody suffers more from winter's extremes than those who get behind the wheel.

The sad fact is that you suffering the pain of winter driving is as inevitable as death, taxes and a Toronto Maple Leafs collapse. But you can protect yourself from the worst horrors the season brings.

The key is to start getting ready before the first snowflakes fall.

Start looking under plastic bags, spilled garden mulch and empty drink containers for the ice scraper you tossed into the trunk last spring. Conduct an archeological dig in your garage to recover your winter tires, then haul them to a garage to pay $100 for installation even though you could do it yourself in 20 minutes if you weren't so afraid of having the wheels fly off your car.

But handling the physical side of winter preparation is easy, unless squirrels have set up house in your winter tire wells. The real challenge is steeling yourself mentally for winter's true horrors: other drivers.

As unpredictable as they can be during spring, summer and fall, they set new standards once winter begins.

Over the next five months (nine in Edmonton), you will share the road with people who haven't figured out the basics of winter driving and who apparently are driven insane by the sight of snow.

They will hit the road during the first snowfall unprepared, as if somehow it never dawned on them that Canada has winter.

(This is excusable for those who were living in Mogadishu last year, not so much for anyone born in Flin Flon, Man.)

You'll know them by the five-year-old all-season tires that turn the roads into one gigantic banana peel, often carrying a 20-kilogram bag of cat litter in their trunk for ballast.

They're the ones who slow down to approximately 4.8 kilometres an hour when roads are at their slickest. Then there as those who believe that owning a four-wheel-drive SUV with winter radials means they can drive faster and break faster than they can on dry pavement.

The fact these two types are on the same roads will make you believe that if the universe has a master plan, it involves the thinning of the herds.

They will leave their driveways without clearing their windows – probably because they still can't find their ice scraper – and peer through a loonie-sized clearing in their frosted windshields as if they were in a submarine.

Once you've found your ice scraper and winter tires, the best way to steel yourself for the unprepared is to watch a horror movie featuring hordes of slack-jawed, vacant-eyed people clogging the roads. 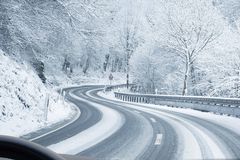 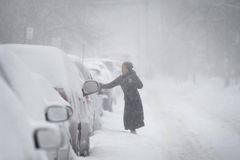 How cold should it be before I plug my car into a block heater?
November 24, 2015 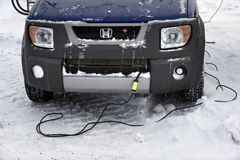