There exists, in certain remote locals, places in which people do not drive SUVs and crossovers and heavy-duty chromed-out trucks.

You don't realize how big our cars are until you go to a place where everything is two-thirds the size, as if, "Honey, I shrunk the cars!" Why do we have such hulking vehicles? Couldn't we downsize?

An Audi Q7 in Italy towers over entire families packed into Fiat Pandas roughly the size of a pint of Ben and Jerry's. Here, a compact Kia Forte or Honda Civic is decently large.

The luxurious Q7 takes up an entire country road in a place where cars whiz past each other with millimetres to spare, where drivers are motivated by a permanent espresso IV drip. It is a thrilling, invigorating driving culture. Imagine a nation of Don Quixotes behind the wheel, not tilting at windmills, but at each other, in cars. Every encounter with oncoming traffic is a game of chicken. Wing mirrors? Don't care about 'em. Do you? Bus drivers are the biggest bullies.

Canadians are either too polite or too distracted to drive like this.

The Q7, Audi's largest SUV, is modestly sized by our standards. It has three rows, but you wouldn't think so looking at it. It's smaller than a Mercedes GLS or any full-size SUV from the Detroit Three. A Chevy Suburban is 5.6 metres long, two metres wide and nearly as tall. The driver of a Ford Super-Duty (more than two metres tall) would see the roof of the Q7.

I once met a gold miner in the Yukon who had a Suburban. The nearest grocery store was hours away. Every couple of weeks, his family – five or six people – would go to the store and pack the car to the roof with food and supplies to tide them over. He needed the Suburban. Do the rest of you?

Of course not. In Canada, we can all have big cars because we live in a big country. No matter where you go in the world, you will find cars are scaled to the cities and roads they inhabit.

The hill-top town of Todi, in Umbria, was built between the third and first centuries BC. One legend says it was Hercules who dragged all those stones up the hill; others say it was the hard-working Etruscans. Whoever built the place, they didn't leave room for SUVs. To get to the central parking lot in Todi, you have to navigate your vehicle through a tight 90-degree bend with stone walls on either side. On a Vespa, no problem, full-throttle. A Fiat 500, even the bloated new one, would make the turn just fine. In the Q7, if you're a couple of inches off, you'll find yourself doing a three-point turn in the middle of a major street.

Once I got the Q7 – scratch-free, I'm proud to say – to the parking lot in Todi there was another problem: It was too large for the spaces. The wheels fit, barely, within the blue lines but the bumper stuck out into the road.

Have you ever heard of a Microcar MC City? Neither had I until I parked next to one in Todi. They're built in France and have two-cylinder engines. The Microcar's latest model, the MGO-3, is advertised on its website as having "Grace… Space… Pace!" As far as I can tell, it has none of those things. Besides, wasn't that Jaguar's famous motto? William Lyons would be rolling in his grave.

If you lived in Todi, or Rome, or anywhere in Italy, you might buy a hideous MC City or MGO-3 because it would make driving and parking easier. In Canada, with our gigantic parking spaces, a Microcar would seem like a cruel joke played upon its driver. There would, however, be advantages. If we all adopted tiny Italian cars, the number of parking spaces downtown would double overnight.

In Canada, we can have big cars because gas is cheap, for now. In Italy, gas costs the equivalent of $2.13 a litre, according to the site Global Petrol Prices. The V-6 diesel-powered Q7 TDI, which is only sold in Europe, is fuel efficient by our standards. Even so, filling up its tank in Italy would cost $142. Suddenly, the MC City looks appealing. Car makers hooking us on luxury, but it's a dangerous game
September 14, 2016 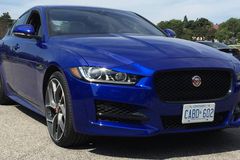