If I'm driving without my wallet and I get pulled over, will I be charged for driving without a licence? I thought I was allowed to produce it within 24 hours. Can I save a photo of my licence on my iPhone, just in case? – Dorothy, Oshawa, Ont.

Police have licence to charge you – or not – if you're driving without yours. But a photo on your phone won't help you – at least not yet.

"It's up to the officer's discretion – you could get lucky," said Sergeant Kerry Schmidt of the Ontario Provincial Police. "You are to surrender your licence when requested to, and a picture would not satisfy an officer because it may or may not be legitimate."

Section 33 of Ontario's Highway Traffic Act says all drivers have to carry a licence at all times while "in charge of a motor vehicle or street car." There's an $85 set fine. Or, if you're convicted, a judge can decide on a fine of anywhere from $60 to $500.

There's nothing in the law that says you have 24 hours to produce it. Still, an officer might decide not to charge you, but you have to give your name and address to identify yourself.

Police in Ontario can look it up on the spot to see whether you look like your driver's licence photo on file, Schmidt said.

"The ministry does not currently accept photos of licences in lieu of the actual card," Ontario's Ministry of Transportation said in an e-mail statement. "Therefore, drivers must carry a drivers licence card."

And everywhere else in Canada? We checked – every province requires you to carry your licence with you. And nobody has a law that allows you to use a picture of your licence.

But in some provinces, including British Columbia and Quebec, police may not be able to see your driver's licence photo in their system.

"Will we accept a photo on your phone? Photoshop is a wonderful thing, so, no," said Constable Jason Doucette, spokesman for the Vancouver Police Department. "The bottom line, you have to carry your card. However, if the officer wanted to use discretion, [we] could use another photo ID plus the police database to identify you."

"You're supposed to have your licence with you," said Sergeant Audrey-Anne Bilodeau, Sûreté du Québec spokeswoman. "But it really depends on the situation. Maybe if you were in a small town the officer might let you go home to get it, but there's nothing in the law that says they have to."

And if an officer isn't convinced that you are who you say you are – if you don't know your zodiac sign, postal code or previous address, say – you could be detained until you can prove it. "But from my experience on the road, that's really unusual unless it's a criminal matter," Bilodeau said.

An app for that?

So how close are we to a driver's licence that would appear in your smartphone's wallet, like a credit card or concert ticket?

Nobody has one yet. Iowa and Delaware have been in a race to be the first American state to offer digital licences.

After a trial run last year with 100 state employees, Iowa is planning to offer a licence app statewide before the end of 2018.

"We definitely need to be able to accept this as proof of identity and driving privilege where necessary," Mark Lowe, Iowa interim department of transportation director, told the Des Moines Register. "Our law enforcement should be able to interact with it and we should be able to use it to rent a car, get a hotel room, buy cigarettes, buy alcohol – things where you are typically expected to provide some proof of identity."

The app shows a licence rotating photo that developers call the "Harry Potter feature." Users upload a selfie that is verified against their official driver's licence photo on file.

There are potential problems, though. What if your battery dies? Or, more seriously, what if a crook hacks into the system and steals your identity? And would you be comfortable handing your phone over to police?

Idaho, Colorado, Maryland, Wyoming and Washington, D.C. – are part of a digital licence pilot, while several other states are officially looking into them, along with Britain, New South Wales in Australia, the Netherlands and Brazil.

And here at home? We checked with every province, and there's nothing officially in the works. "Alberta is open to exploring options for updated ways to display a driver's licence and will consider this as part of future modernization efforts," Cheryl Tkalcic, Service Alberta spokeswoman, said in an e-mail.

Still, there are some nods to the present here.

Ontario and Newfoundland allow drivers to renew licences online, although you have to show up in person if you need a new picture. And the licences are still sent through the mail.

Both provinces require renewals every five years and new photos every 10 years.

Ontario's 2017 budget announced the approval of electronic proof of insurance – which is available in most American states – although no official launch date has been set.

There haven't been announcements from any other provinces, although most say they're considering it.

While they might not replace paper entirely, a pink slip on your phone would mean you wouldn't have to rifle through a nest of papers in your glove box if you get pulled over for speeding.

And they could be updated automatically every time you renew, make a change to your policy or move.

"Insurance companies are supportive of this because it provides consumers with some choice and convenience – not everybody goes and checks their mailbox on a daily basis," said Pete Karageorgos, director of Ontario consumer and industry relations with the Insurance Bureau of Canada. "But we have to come up with methods that are fraud-proof and secure."

What does a prior accident do to my car’s resale value?
September 5, 2017 Should the ‘Dutch reach’ be mandatory to prevent ‘dooring’ of cyclists?
August 29, 2017 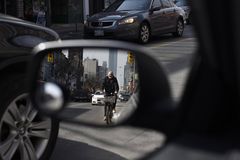 Is it legal to ride your bike on the sidewalk when the road is busy?
August 15, 2017 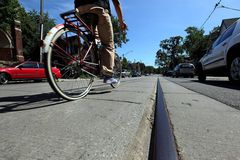