I read this story on lane-splitting and lane-filtering for motorcycles and, as a long-time motorcyclist, I agree that it probably wouldn't work here. I think a better solution would be to allow single riders in the HOV lane. When's that happening? – Ron, Ontario

Easy, rider. There are no plans to allow motorcyclists in the High Occupancy Vehicle lanes on Ontario highways – but that could change, some day.

"Allowing a single rider on a motorcycle to use an HOV lane does not support Ontario's goal of moving more people in fewer vehicles, as it does not remove a vehicle from the road, unlike a commuter using a carpool or transit," said Bob Nichols, Ontario Ministry of Transportation spokesman, in an e-mail.

Right now, anyone riding solo in an HOV lane, or even in the painted buffer, could face the same penalties as a solo driver: a $110 fine, including court fees, plus three demerit points.

But, the ministry is doing a review that "will include consideration of allowing single-occupant motorcycles on provincial HOV lanes," Nichols said.

Why should motorcycles get an exception to the two-up rule?

In 2016, there were nearly 240,000 registered motorcycles in Ontario – and more than 7.1-million registered passenger vehicles.

Getting more motorcycles into the HOV lane could ease traffic congestion and encourage more people to ride scooters and bikes.

"Toronto allows single motorcyclists in HOV lanes and maybe other jurisdictions could do the same," said Raynald Marchand, of the Canada Safety Council. "You're taking them out of the main flow."

And, he said, it might help keep motorcycles from getting cut off because, "typically, people don't move in and out of the HOV lane except at specific spots."

In Toronto, passenger cars must have at least three people inside to use the HOV lane, but "plated" motorcycles and scooters are allowed with one driver, said Constable Clint Stibbe of Toronto Police Traffic Services in an e-mail.

"The HOV lanes are used in other parts of the world for motorcycles," said David Millier, chair of the Motorcyclists Confederation of Canada. "It makes a lot of sense because you're getting bikes out of the flow of traffic and not worried about them weaving in and out, but the Ontario government hasn't been interested."

Proponents of lane-filtering and lane-splitting – allowing bikes to travel in between lanes – say it's safer for motorcyclists because they're not sitting ducks in gridlock.

"You'll see all kinds of weird numbers online," Millier says. "People say 60 per cent of [motorcycle] deaths are caused by rear-enders, but that's totally untrue; it's maybe five per cent."

Another plus for motorcycles? Being able to move, instead of sitting in stalled traffic, keeps air-cooled bikes from overheating.

"They'd be moving instead of sitting there breathing fumes," Marchand said. "But in return for using the HOV lane, we'd like to see a rule that they have to wear proper gear, instead of shorts and flip-flops, when they're in it."

Marchand said the proper gear rule shouldn't be impossible to enforce, and it would throw a bone to drivers angry about hogs hogging the HOV lane.

"They'd see that motorcyclists have to follow rules to use the HOV lane," Marchand said. "And there's a benefit for society because if motorcyclists dress properly, there are fewer injuries."

Should motorcycles be allowed to drive between lanes of traffic in Canada?
March 28, 2017 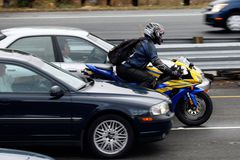 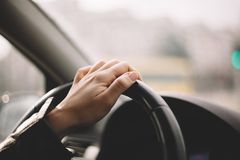 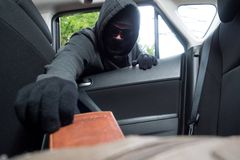