If I'm fiddling around with my climate control or trying to program radio stations, can I be charged with distracted driving in Ontario? Those things can be as distracting as cell phones. What about other activities that take your eyes off the road? -- Darius, Ontario

If you're driving while changing your car's clock, digging around in the glove compartment for a parking pass or reaching around to the back seat to open your kid's yogurt, you're guilty of distracted driving.

But, you're not breaking Ontario's distracted driving law.

"The distracted driving section of the Highway Traffic act law only deals with handheld electronic devices," says OPP spokesman Sgt. Pierre Chamberland. "Anything else that takes your attention away from your primary task is potentially dangerous, like drinking coffee and spilling burning coffee on your lap, isn't addressed by that section, but it's a bad idea."

The law is specific

"Ontario's distracted driving law is aimed at combatting a particular form of driver distraction - the use of hand-held communication and entertainment devices and display screens," says Ontario's Ministry of Transportation in an e-mail statement. "Safe driving requires undivided attention. Drivers need to focus on the task at hand: keep your eyes on the road and hands on the wheel."

What you can't do legally

Here's what sections 78 and 78.1 say you can't do while driving, including while stopped at a light, according to the MTO:

What you can do legally

There's an exception for drivers of emergency vehicles.

If you get caught breaking the law, you'll face a $280 fine. Last week, legislation was introduced to raise the maximum fine to $1000 and to add three demerit points.

The MTO says they don't enforce the law or decide what you'll be charged with – that's the job of the police. If you're caught driving unsafely or get in a crash when you're not using a display screen or a hands-free device, you could still potentially face charges.

"In more serious cases, police have the option of laying a Careless Driving charge under the Highway Traffic Act, which carries hefty penalties such as six demerit points, fines of up to $2,000 and possible jail time," the MTO says. "Police may also lay a charge of Dangerous Driving under the Criminal Code of Canada, where drivers could face jail terms of up to five years."

Fiddling with complicated radio or climate controls could be a distraction, but it's not banned by Ontario's law – or by any other distracted driving law in Canada.

"We all need to use common sense: if it takes your attention off the road, don't do it while you're driving, even if it's not illegal," says Karen Bowman, founder of Drop It And Drive.

So, if the stereo is so complicated that it distracts you, it's probably a good idea to set it when you're parked or pulled over.

The same goes for anything else that pulls your eyes off the road, regardless of the law, Bowman says.

"When we do our seminars, we get a lot of the same old questions: 'When is it legal to do this?'" she says. "Safe driving is not about coming up with exceptions to rules."

No shaving in Alberta

Right now, Alberta is the only province that bans drivers from several distractions that don't involve a hand-held device. It gives a $172 fine for drivers caught reading, writing, sketching or grooming (like shaving, flossing, or putting on eye shadow) on the road, as well as drivers texting or chatting on cell phones.

"We are not talking about penalizing drivers for taking a sip of coffee, chatting with passengers or blowing their nose," says Alberta Transportation on its website. "We are talking about drivers who decide to put themselves and others at risk by watching movies, browsing for and downloading 'apps', applying makeup or shaving all while trying to navigate through traffic."

More Questions? Click here for "When can I legally pull over to answer a text or phone call?" 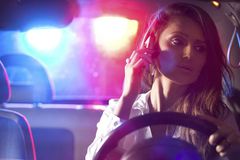 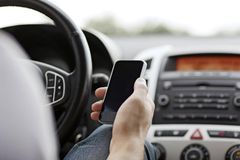 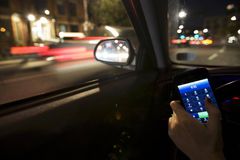 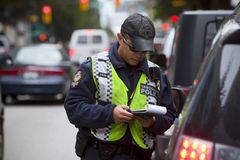 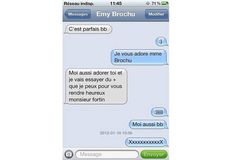